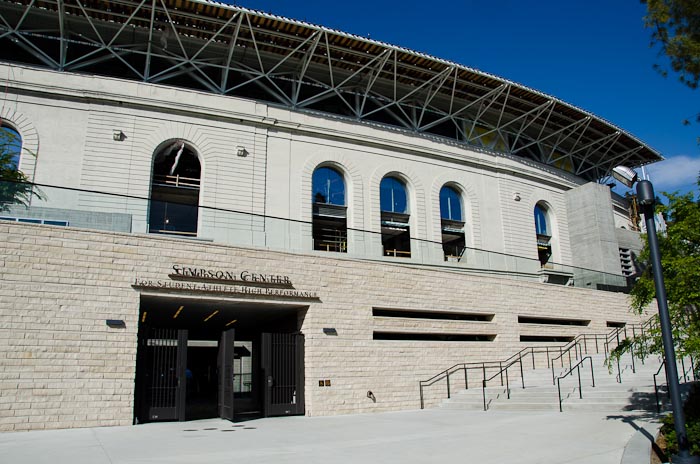 The West Wall of Memorial Stadium above the Simpson Center

On September 1st, 2007, the UC Berkeley California Golden Bears football team played a much anticipated game against the SEC powerhouse Tennessee Volunteers at historic California Memorial Stadium.  My beloved Bears had been humiliated in Knoxville the year before, and this was our chance for revenge.  The team did not disappoint the home crowd that day, winning 45-31 in convincing fashion, and by all rights, Zack Follett’s bonecrushing sack of Erik Ainge and Desean Jackson’s scintillating 77-yard punt return should have been the stories of the game. But they weren’t.

Instead, a national TV audience on ABC heard announcers Brent Musberger and Kirk Herbstreit bemusedly and repeatedly reference the game’s other storyline, the misguided protest going on in the trees outside the stadium.  The protracted court battle that followed delayed the planned earthquake retrofit project by two years, meaning Cal fans had to spend many additional Saturdays in an “appreciable life hazard” due to the fact that the Hayward fault runs directly through the middle of the stadium.  It was a painful process for all those in the Cal community, but due to the tireless efforts of the Cal administration and athletic department, we are nearing the finish line.  And it seems poetic that on the five year anniversary of that game against Tennessee, the California Golden Bears will again take the field in Berkeley, this time in a remodeled Memorial Stadium.  After touring the site, I can happily say that it was worth the suffering.

Then, We Sample the Food 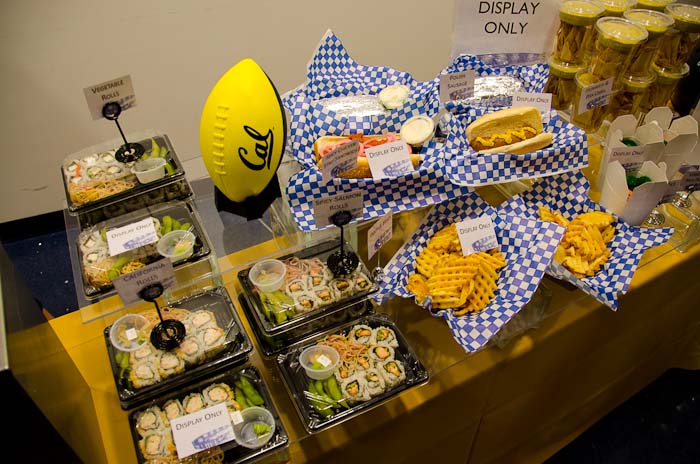 I recommend eating everything except the football.

We began the tour in the Simpson Athletic High Performance Center (SAHPC), in a dining room overlooking the cavernous weight room.  There, we sampled some of the food that will be offered on game days, including sausages and spicy chicken sandwiches as well as healthy options like hummus, Asian stir fry bowls, and even sushi!  We also got to sample the soon-to-be-popular waffle fries, and Athletic Campaign Manager Justin Panarese showed us the hand signal for ordering these in a crowd (raised arms with three fingers on each hand crossed to form a waffle pattern).  And for hot September Saturdays, the ice cream bars will be guaranteed to keep fans cool.  Two did the trick for me!

Safe To a Fault 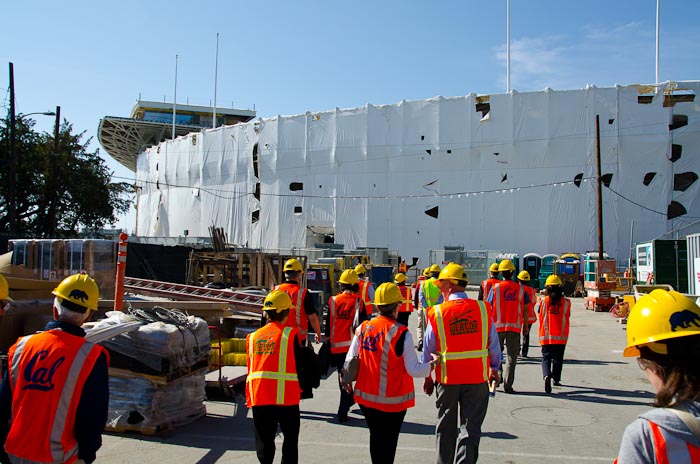 The facade is still protected by plastic.

Since construction is still in full swing, and pretty much every single minute is planned out for the next hundred days until opening day, our tour was on a tight schedule, taking place during the hour between the day and night shifts.  We started by passing through the south side of the stadium, the iconic facade still protected by plastic, where we got to see the high tech earthquake safety features up close. 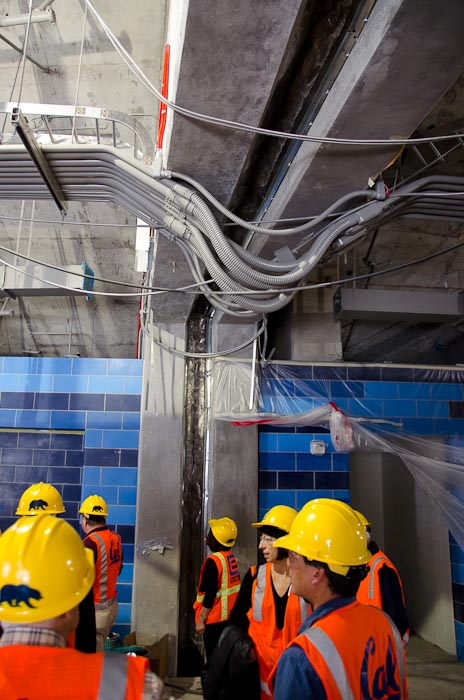 Two halves of the stadium separated by the fault line

As I mentioned before, the Hayward Fault runs directly through the stadium, and before the retrofit, this had caused the two halves of the stadium to literally split apart over the years. Now, in the event of an earthquake, giant sections of the stadium can move independently, and a Styrofoam layer between them acts to absorb energy. 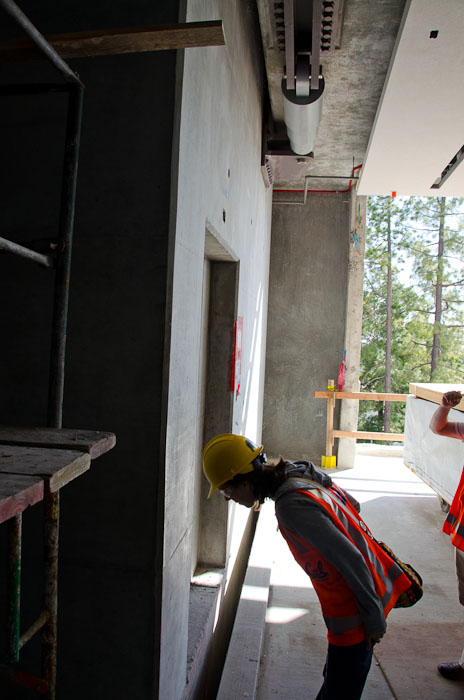 A shock absorber above, a gap allows views all the way down

Perhaps the most obvious improvement in the new stadium is the giant press box, which also includes the luxury University Club seating.  Before the renovation project, the previous press box had to be torn down due to safety hazard, and was replaced by a temporary structure that I imagine couldn’t have been any safer.  The new press box is structurally independent from the west side of the stadium.  Heading through the tunnel toward the west side, we could see giant shock absorbers designed to dampen the motion between the two structures.  There is also a perceptible gap in the floor where this independent nature becomes very obvious.

The Views Now Seem Even Better, Inside and Out 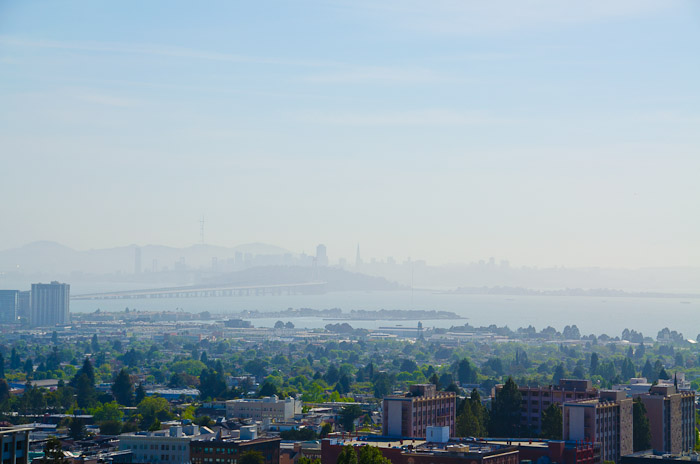 Panoramic Views of San Francisco Bay from the University Club

We took the service elevator to the top floor, where the University Club seating is located.  From there, we took in what is easily the greatest view in American sports, a panoramic view of the San Francisco Bay, featuring the Sather Tower, Golden Gate and Bay Bridges as well as the city skyline.  Atmospheric haze obstructed our view on this day, but on game days, fans in the stadium and viewing at home at television will once again be able to marvel at the views from Strawberry Canyon.  It will be a showcase of Cal’s beautiful campus.  On the Stadium Club level, floor to ceiling window arches again allow incredible views of the panoramic scene.

All levels provide ample space for food vendors and access to bathrooms, both big problems before the renovation.  Much wider corridors are sure to mean a more comfortable experience for visitors during halftime and also entering and exiting the stadium.  In touring the site, it really feels like no detail has been overlooked, including little things like how a Cal logo lights up when you push a button on the elevator.  Unique design themes are present on all levels, and even the fabric for the throw pillows has been carefully chosen!  Before construction is complete, the stadium already feels very comfortable.

The view from the Field Club

But while the views and amenities of the upper club levels were great, getting to see the view from my seats was the real treat.  The field has been lowered 4 feet, so the already incredible sight lines from every seat will be even better in the new Memorial.  Even very low rows will have clear views of the action.  For Cal fans worried that no good seats remain, I think everyone will be very pleasantly surprised.

A Bright Future is Ahead of Us

For the first time, I feel like my investment in Cal has a basis in rationality, and not just a leap of faith that I took because I love football too much.  Seeing the progress in the project gives me strong optimism in the future of the Cal program.  It’s obvious that the Cal administration got it exactly right with both the stadium and the already open SAHPC.  This is a shining beacon on the hill in which everyone in the Cal community can take tremendous pride.

Waiting until September 1st isn’t going to be easy!