To get an authentic, Ohio State game day experience, everyone told us to go to the Varsity Club. It looked like a pretty standard bar/restaurant from the front, but when you cross in back you see how unique it is. It’s a small building placed front and center within a huge, gated open lot, with multiple bars and mobile vending stands surrounding the perimeter. The sole purpose of this place is to tailgate. Cram as many red- and white- clad football fans into the lot and serve them beer and food as efficiently as possible. They claim to be home of the biggest tailgate party in the country, which I might have believed if I hadn’t already seen the monstrous Bud Light River Jam tent set up just half a block away. 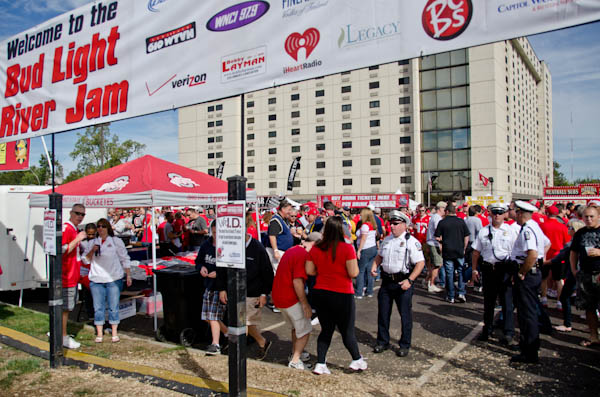 We were a little nervous about joining their party. Kevin and his friends are UC Berkeley alums, huge Cal football fans, and were sporting their finest blue and gold. We’d been told to be leery of Ohio State fans. There was rumor they could be aggressive to the opposing team (though I think the fear mongering may have come from a fan we know who went to the University of Michigan—their biggest rival). 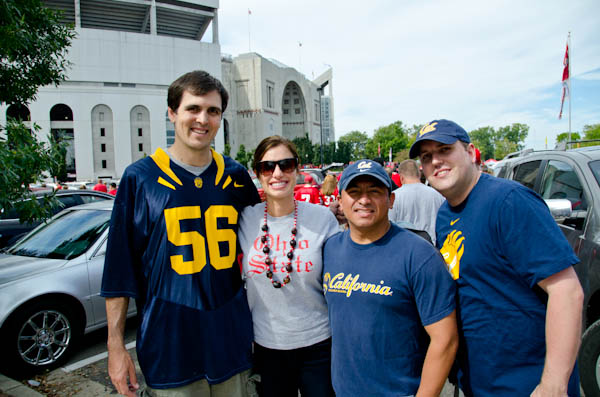 Kevin’s friends (Erin grew up in Ohio, so she was true to her Buckeye roots)

I wasn’t wearing any of those colors and I wasn’t planning to go to the game. I’m not a football fan, I’ve never really understood the sport, though I appreciate the game-day festivities and enjoying good food and drink with friends. So I was there to hang out until Kevin and the boys went into the game, then I’d be on my own to explore Columbus.

When we stood in the security line to enter the Varsity Club, there was nothing I was wearing that would identify my allegiances to other team, and I’d been separated from Kevin and his friends who entered while I was taking photos. The security guard checked my camera bag and asked me to dump a full bottle of water. I was thirsty and bottled water prohibitions make me livid (I remember the time a guard at the Cancun airport wouldn’t let me on my flight with a brand new, sealed bottle of water that I had bought IN THE AIRPORT!).  So I told him I’d stay outside of the gate and drink it. I stood to the side and downed the bottle of water in a few quick swigs. Then, annoyed, I tossed the bottle into the trash and brushed my way past the guard. 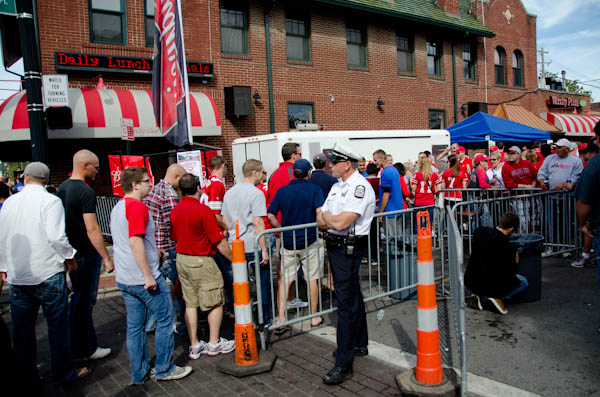 Line to enter the Varsity Club

That’s when a 50-something woman and her husband, standing near the entrance called me aside.

“Are you from California?” she asked.

I was caught off guard. She didn’t look like the type that would hassle the opposing team’s fans but I was hesitant. I said, “Yes, I am. My friends are Cal fans and they are here for the game”.

She told me, “I knew it! An Ohio girl wouldn’t chug a bottle of water like that! At first, I thought it might have vodka in it—an Ohio girl would chug the vodka–but then it looked like it didn’t so I knew you were not from around here!” 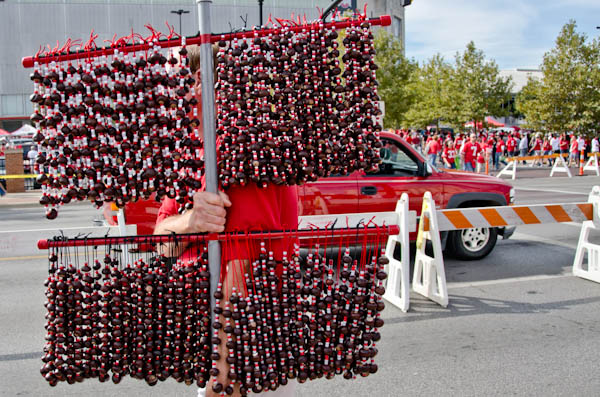 She then asked me questions about Berkeley and San Francisco, she was really curious about it. I told her about our modest tailgates, but about the beauty of the Bay Area. I encouraged her to visit when Ohio State plays Cal in Berkeley next year! She said maybe, that it wasn’t likely, but that she was really happy we’d come to visit Columbus.

And that’s the greeting we got from everyone in Columbus! They had a lot of pride in their school, their team, and their city and they were happy to see so many Cal fans had come to join them. 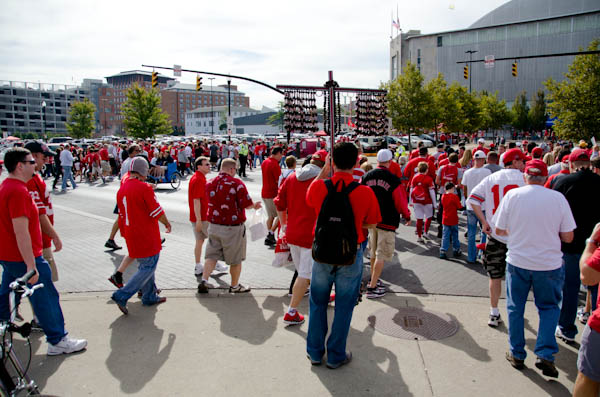 No doubt, part of this of course, was because we weren’t considered a serious threat. The night before I’d spent the evening with friends Jeremy and Michela. We met Michela’s friend, Anna, who had grown up in Columbus. She told us a lot about the traditions of tailgating at Ohio State (like fans not partying the night before the game—they save up all their energy for the game day tailgates—and not partying afterward, unless there is some legendary performance). At one point, she told us that “no one cared about this game” that “they are a ‘no name’ team,” and that OSU fans don’t really feel strongly unless it’s another Big Ten conference team. It made total sense, and wouldn’t have surprised any of the Cal fans in attendance. They were all feeling pretty down on their prospects in facing such a storied team.

But I don’t attribute the kindness of locals exclusively to how awful our team had been playing. The people we met were of ages and all demographics. Football unites the community like nothing else can, and for the most part, I think their fans are excited to show off their stadium, their city and the team that they love. It’s the same in Berkeley, for the most part (and on a smaller scale–their sprawling stadium fits over 105,000 fans—ours in a densely populated residential neighborhood, 63,000). These community-building aspects are what I appreciate most about football, and Ohio State didn’t disappoint!

Here are some more photos from the weekend: 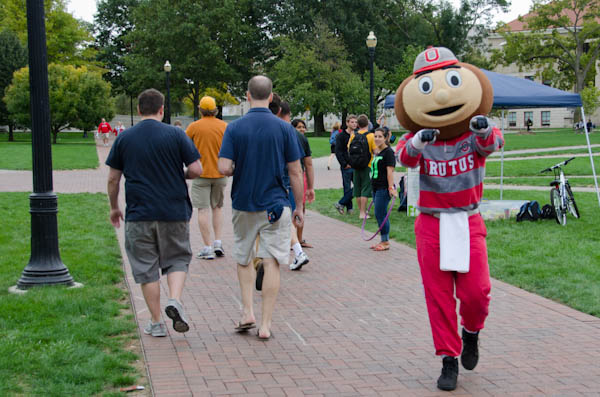 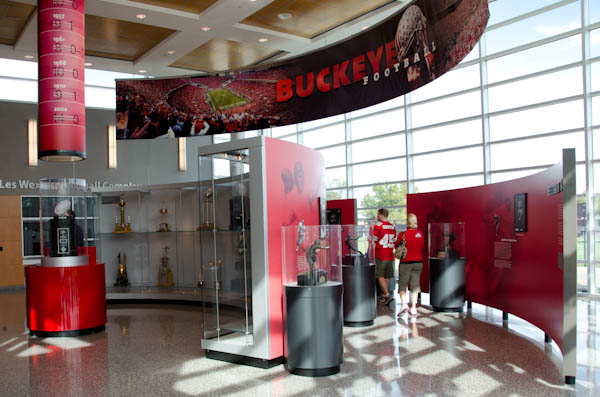 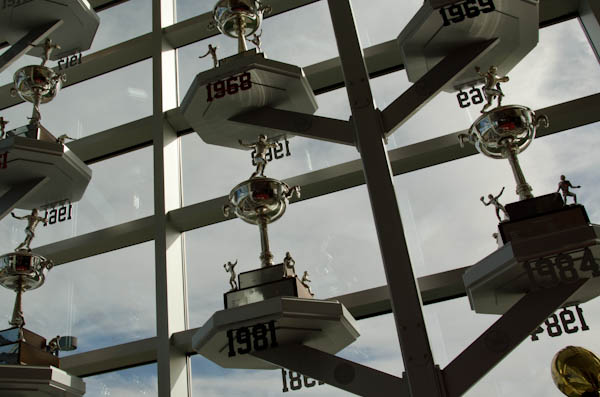 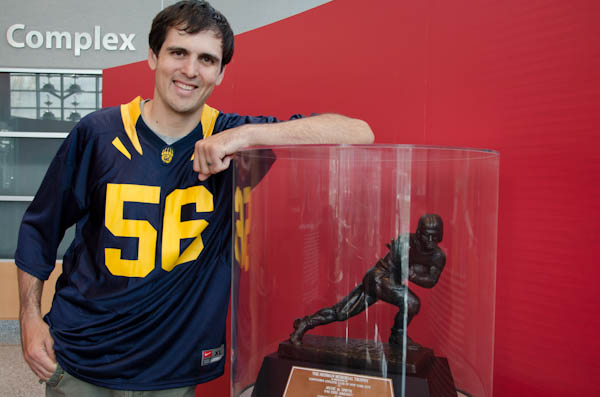 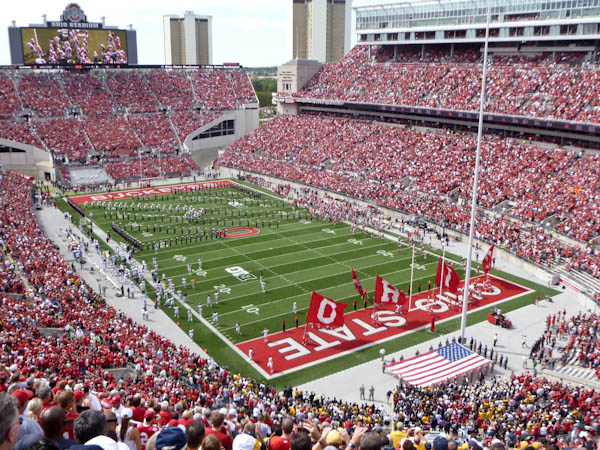 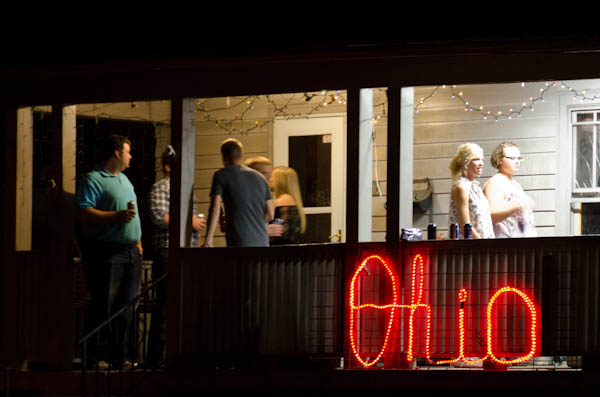 So, I love tailgates! What are your favorite sporting traditions?