You are here: Home / Thoughts / Deeper Connections Through Language (And How I Failed to Make One)
Share4
Tweet12
Pin6
22 Shares

Our AirBNB host had said the lock was fussy, but told us how to overcome it. I repeated the process, jiggling the key in the lock throughout per her instructions. Still nothing.

Fast forward 45 minutes. After bouts of angry and frustrated lock jiggling, with rest breaks spent pouting on the stairs, I finally emailed Kevin at work from my phone and asked him to have a French coworker call our out-of-town host’s local friend, Violeta, to tell her our key wasn’t working.

An hour later, still frustrated, still locked out and now sprawled out on the stoop waiting for Violeta to come rescue me, I took this picture and posted it to Facebook. 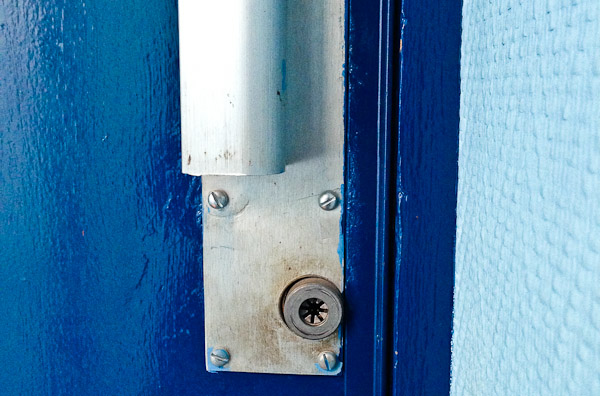 I included the story and the optimistic remark, “At least I have wi-fi!”

People liked the update, chiming in with words of sympathy and wishing me luck.

Then, my friend Melissa posted this: “Well, on the upside, France just passed marriage equality!”

Whaa? How could this be? Melissa was writing from California. I’d been in France for three days and I hadn’t heard that the national legislature (or whatever they are called) was considering this issue. It’s an issue I care about, one that I follow closely when I’m at home–how could such important and timely news have passed me by?

Then I remembered. How would I know? I don’t speak or read French, and all week I could count the number of people on one hand that I’d spoken to in more than a transactional manner (oh, and Kevin was one of them).

I wondered what else I was missing, not just in current events, but in peoples’ lives. Learning about other people is one of my favorite parts of travel and I realized I wasn’t learning anything about anyone here in Paris.

I speak Spanish pretty well. I’m not fluent, but I can almost always get my message across and can hold my own when talking to people one-on-one. Moreover, I love the challenge of speaking Spanish and speak it as much as possible at home and abroad. In France, I felt mute.

Don’t get me wrong: Paris is in no way “off the beaten path,” and is a very easy place to visit if you speak English. You can always find someone who speaks some English and you are unlikely to get yourself into a quandary that you can’t pull yourself out of because of language. But resorting to English makes me feel guilty. I think, “I’m in a French-speaking country, I need to speak their language or keep my mouth shut.”

But that doesn’t mean that you can’t have those experiences when you travel to a place where you don’t speak the language. It just means you have to try a lot harder by talking to even more people than you would otherwise. 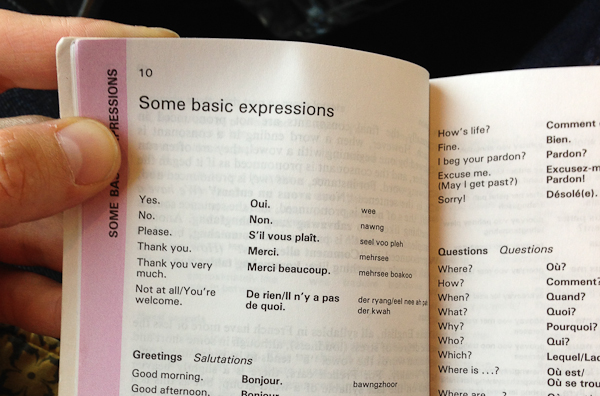 This is about as far as I get.

I’ve been thinking a lot about these elderly women I kept seeing in Paris. They were very light-skinned, their heads wrapped in brightly colored scarves and they had striking blue tattoos on their faces. Stripes and dots on their nose cheeks and chin. While we were there, I googled something like “facial tattoos old women paris” and found articles about tattoo tradition among Berber communities in Algeria and Morocco. The whole trip, I had assumed these ladies were Algerian.

Then last week, I got an email from the one guy I did get up the nerve to talk to at a flea market we visited. He was a young, Algerian guy who had lived in Paris for two years. We exchanged emails and he told me about his home country. I finally got up the nerve to ask him about the women and their tattoos.

He told me that yes, there are women with blue facial tattoos in Algeria, but the women I was seeing in Paris were from “romani countries.”

The Roma… gypsies! I was so focused on the local Algerian community I had forgotten about the gypsies, though I knew they were a large ethnic group in many European cities. This further highlighted my inability to understand the community, all because I was too shy to talk to anyone.

In retrospect, I didn’t try hard enough to make the connections that would help me learn as much about Paris as I hoped.  To some degree I really needed to disconnect and be lost in my head for a few days, but after that it was this irrational guilt, fear of embarrassment, and a bit of laziness. I regret not learning more about the people living in the communities we visited and getting beyond the surface of this very popular, but not so well-understood city.

Share4
Tweet12
Pin6
22 Shares
« How Do You Choose a Hotel When You Travel?
Springtime in London’s Parks and Public Spaces »