In late June of 2012, four months before Cassie and I were to arrive on the Galapagos Islands, the most famous resident, Lonesome George passed away  at the young age of 100 (give or take a few years).  He was the last of his species, and had been a celebrity since he was discovered on his home island of Isla Pinta.  But I’ll talk more of Lonesome George in a bit. 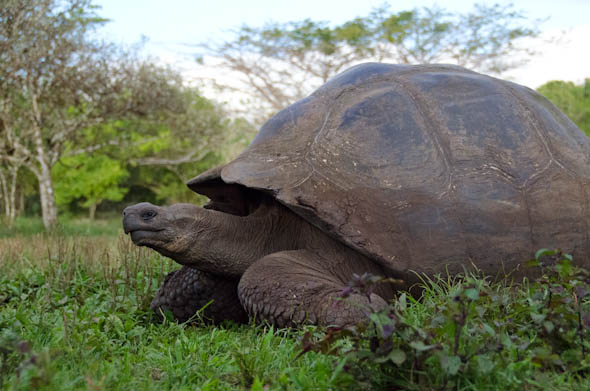 Of the 15 species of Giant Tortoises that originally inhabited the Galapagos, only 10 remain, and all are endangered.  Human beings bear sole responsibility for these extinctions, and have carelessly exploited the resources on the islands since their discovery in the late 17th century.   Though it is a truly shameful story, with awful details, there is still reason to be positive about the future of these majestic animals.

The Past: Food and Souvenirs

Normally, when I think of travel souvenirs, I think of the little knick-knacks we bring back to friends and family that we buy at the airport, or perhaps a t-shirt with the name of some far-off place on it.  But for over a century, visitors to the Galapagos were fond of bringing back far more startling souvenirs to help them remember their trip to the islands: living Giant Tortoises!

As you might guess, over the following decades, many of these tortoises outlived their owners (and even their owner’s ancestors), and many of these survivors have been repatriated to the Galapagos to live out their days in a walled-off sanctuary on Floreana Island.  Because the tortoises carry non-native bacteria and other parasites that cannot be unleashed on the rest of the islands, they can never return to their home islands. 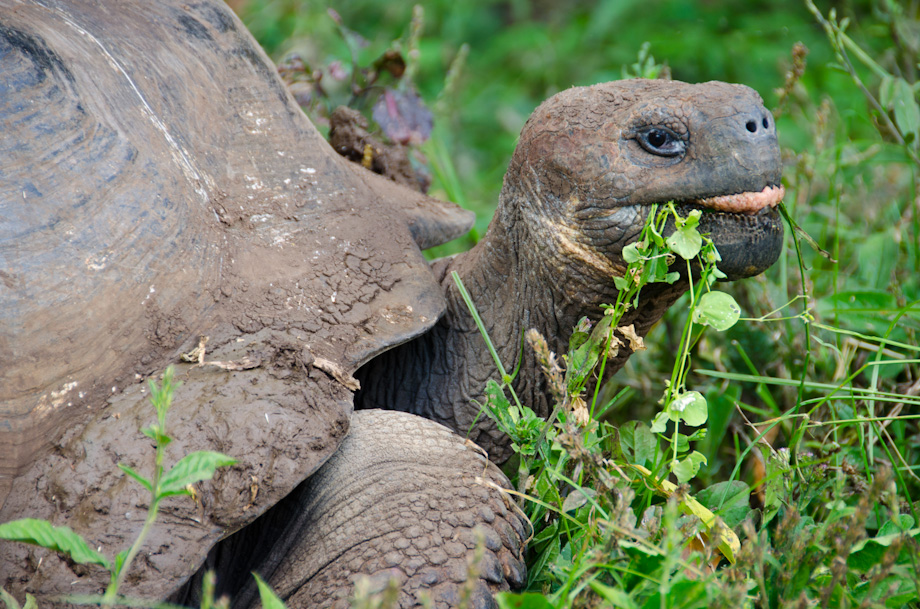 Sad to say, those tortoises taken as souvenirs were the lucky ones.  At the time Charles Darwin visited the island, sailors considered the tortoise to be a vital (and tasty) supply of food.  As the tortoises are capable of surviving several months without food or water, they were gathered up and placed upside down in the ships’ cargo holds.  There, they were kept until the day they were slaughtered for fresh meat.  Darwin, himself, wrote of enjoying the taste of tortoise meat, and even of riding on the backs of tortoises for entertainment.

Of course, today, taking absurd souvenirs or eating tortoises are considered heinous practices, and both are long-banned.

Traders and sailors, in addition to dining on the tortoises themselves, also used the island chain as a supermarket of sorts.  Livestock such as goats, cattle, pigs and chickens were all brought to graze on the islands so that they could be sold to ships passing by on their journeys in the Pacific.  Around this time, Floreana Island was the only known source of fresh water in the Galapagos, so nearly all ships visited to refill their supplies. 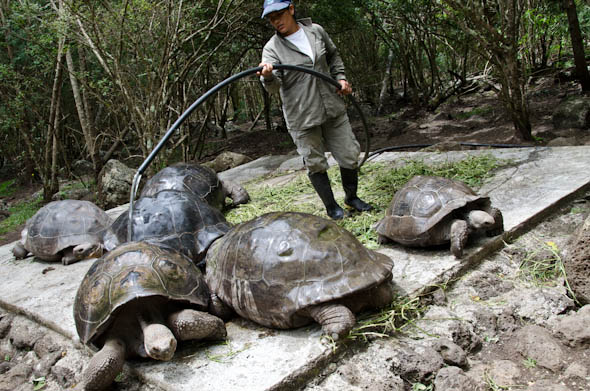 Over time, the livestock over-grazed large stretches of land, and even escaped to become feral populations on several islands.  Not only did these animals compete directly with the tortoises for the same food sources, but they also trampled tortoise nests as well as baby tortoises whose protective shells have yet to fully develop and harden.  Efforts to eradicate these animals took decades, and only recently have they finally made significant progress in solving this problem.   Giovanni, the naturalist on our ship, the Archipell, told me that even five years ago, it was common to see many goats along the hiking trails on the islands.  Now, the landscape will have a chance to recover.

Additionally, other unintentional travelers have invaded the islands as well.  Rats and fire ants both attack tortoise eggs and have proved extremely difficult to eradicate.  The war against these species continues to this day.

Due to these invasive predators, however, baby tortoises are unable to survive in the wild, and without human intervention, no tortoise species would have any chance.

The Future: Breeding Centers, DNA Analysis and a new surprise!

On Santa Cruz and Isabella Islands are breeding programs to preserve all the remaining species of giant tortoise.  Not surprisingly, these giant tortoise conservation projects require a significant long-term investment.  Scientists believe Giant Tortoises are capable of living up to 200 years, though no one knows for certain, as it will take many decades of research to answer this question. As the baby tortoises grow, they are moved into new pens every few years.

It takes over 10 years for baby tortoises to reach a size where scientists can safely return them to the wild.  Before this age, the tortoise shell is too soft, and the animal is vulnerable to being trampled by invasive livestock species, and to rats and fire ants. DNA analysis has also provided many new insights into how the tortoises of each species are related to each other.  For many years, scientists had attempted to breed Lonesome George with tortoises from islands close to George’s home of Isla Pinta.  It turns out that of the 10 other tortoise species in the islands, the closest relatives actually lived on Isla Espanola, one of the Galapagos’ most distant islands to Isla Pinta. Remember above how sailors kept the tortoises for months in their ships?  This ability to go without food or water also allows the tortoises to survive long journeys on ocean currents to travel between islands (and yes, tortoises DO float).   In fact, this is likely how the tortoises came to inhabit the Galapagos in the first place, having floated all the way from the South American mainland.   To learn more, watch this video from renowned evolutionary biologist, Richard Dawkins.

Even more surprising, scientists have recently announced the discovery that at least 17 tortoises found on Isabela Island might even belong to George’s species!  As a result, there is newfound optimism that the species can be saved. 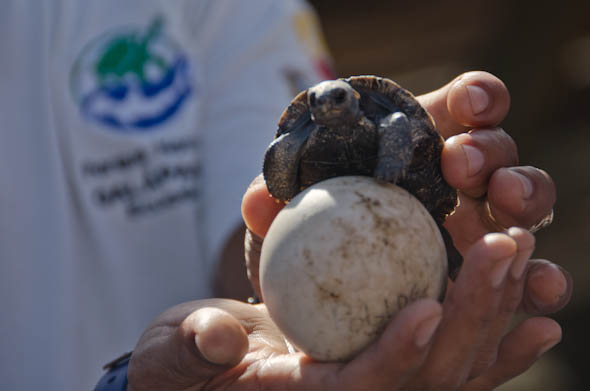 Despite the new emphasis on giant tortoise conservation in the Galapagos national park, efforts to eradicate harmful invasive species, and a breeding program that has seen some early success, the survival of the remaining Giant tortoise species is far from assured.  The most significant challenge continues to be the impact of humans on the fragile ecosystem.  Tourism provides revenues that pay for the recovery, but comes with risks from overconsumption of resources, and overexposure of humans to the environment.  Likewise, the interests of a growing population living on the islands will often come into conflict with the best interests of the giant tortoises.  For these reasons, we can never become complacent that threats to the tortoises will become a thing of the past.