You are here: Home / Destinations / Spain / Granada: In the Shadow of the Alhambra
Share
Tweet12
Pin4
16 Shares

The Alhambra is, no doubt, an architectural wonder and an icon of Spain’s rich political and cultural history, and we had an amazing time visiting it. But below the Alhambra’s towers and fortified walls, we found some other unique and interesting things to do in Granada, Spain. 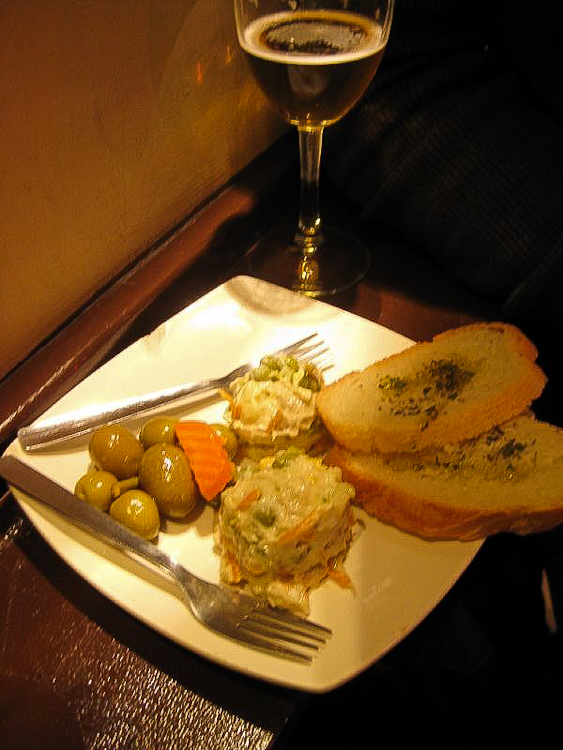 Kevin and I love food and we love to explore unique drinking customs of the world. So when we read that all of the bars in Granada provide free tapas or small bites to eat, for free with every drink you order (a custom that has largely been abandoned in other cities), we were excited to see for ourselves.

I didn’t know what to expect, whether you had to specifically order something or what would happen, so when we first walked into a bar, we both ordered a small glass of beer and waited. The bartender brought us our drink, and set it before us. We looked at each other, a bit let down, but took our beverage.  At that moment a waitress brought us a plate with two slices of tortilla española.  It was a small gesture, but we were thrilled. We were excited to go from place to place to see what would be offered. Most places were quite simple (garlic bread and a few olives), but others were quite hearty (lamb stew with couscous). After the second bar we went to, I got comfortable asking off the bat to be brought something vegetarian for myself.

I believe the only time we actually bought food was our breakfast before the Alhambra. That was the one time we found it too early to stomach the requisite beer or wine. 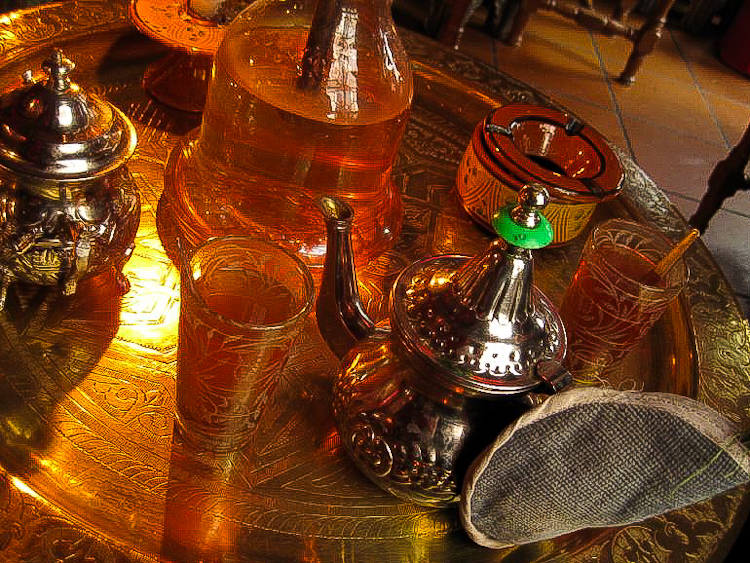 A taste of North Africa in Granada’s teahouses

North African immigrants from Morocco and Tunisia have worked to revitalize and capitalize on the Moorish heritage of Granada. The Albaicín district is full of Moroccan and Tunisian shops selling North African textiles and souvenirs. But the shops I was most taken with are the Moorish tea houses (teterías). I’m a tea lover and was delighted by the opportunity to try tea in this style–a hearty Chinese green tea, mixed with fresh mint and lots of sugar.  The tea houses are dark, intimate places with exotic smells of spices and fruit-flavored hookah. They attract a young crowd, certainly younger expect of an English-style tea house, but also younger than the hip Asian-influenced tea rooms I know in San Francisco.  There were several tea houses to choose from, and we went to a few, alternating our visits with bars, to maximize our ability to sample the tapas.

Experience the Arab bath tradition with a bit of modern comfort

For travelers looking to rest their weary legs after a long day at the Alhambra, the Arab baths were a wonderful find and a simple luxury to end our trip to Granada.

We went to the Hammam Baños Árabes, a spa in the style of the traditional Arab bathhouses that were located in every Spanish community during Moorish rule. The Hammam bath was designed to replicate the historic bath houses, but the building was not a historic structure itself. Still, spending time in it gave you a sense of the experience of the purifying rituals and relaxed opportunity to socialize that had been performed in such houses throughout history. I have no photographs from our time inside for obvious reasons, but it had arched ceilings, colorful geometric-patterned ceramic tiles, and candle-lit walkways.

You need to bring a swimsuit but if you don’t have one (as I frustratingly realized that morning I had forgotten to pack one!), you can buy a simple one-piece from them for a small fee. They give you a towel after you pay.

The bathhouse offers hot, warm, and cold pools. The appointment includes a brief 15 minute aromatherapy massage and then you have access to the pools for 1 hour and 45 minutes. They only allow a selected number of people in at a time, so it is not crowded, and the multiple large pools ensure you can find a peaceful corner to yourself.

We spent the morning there relaxing and left invigorated and ready to explore more of Granada’s beauty and culture.

What are your favorite things to do in Granada?