As I approached Paris’s Pont des Arts bridge, I thought that it was painted gold. The surface glistened in the bright, midday sun. As I got closer, I realized that instead of gilded paint, the shiny metallic look was caused by thousands of padlocks attached the grates. It turns out that this was Paris’s most famous “Love Lock” bridge. 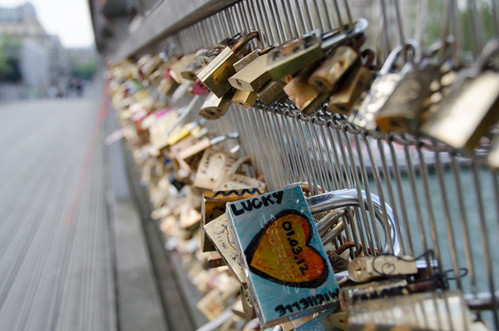 I’m not a particularly romantic person, but when I first heard of the love lock phenomenon, I thought it was very sweet. Here’s how it goes: A couple writes their names on a padlock and locks it onto a bridge. Then they throw the key into the river to symbolize their lasting commitment to each other. 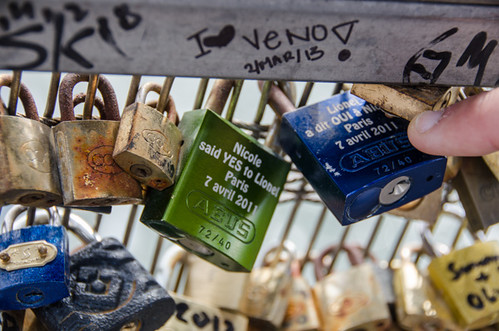 Famously romantic Paris has become the center of this custom and it has become a must-do activity for lovebirds visiting the city. While the locks started appearing on the Pont des Arts bridge, then started filling the Pont de l’Archevêché bridge, I took all these photos on yet a third bridge, the passerelle Léopold-Sédar-Senghor. Likewise, the practice has spread to cities around the world: New York, Seoul, Budapest, and Tokyo all have love locks on bridges. Hell, I just heard there are even some love locks on a freeway overpass here in Silicon Valley. 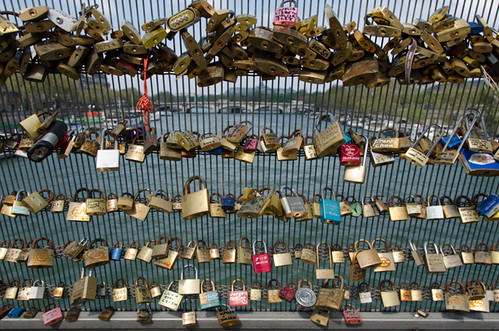 Like I said, I initially liked the idea and before this trip I’d told Kevin that I thought we should attach a love lock to that bridge over the Seine. It would be a sweet, public gesture of our love and perhaps make up to our friends and family for eschewing the Wedding Industrial Complex to get married at the county clerk’s office. Plus: The cute photo-op of us placing our love lock would make an easy blog post.

But as I stood fiddling with the rows upon rows of locks, some dated back to 2010 and being destroyed by rust, others thick, heavy-duty industrial size locks weighing over a pound, I had a different thought. These locks are really heavy! 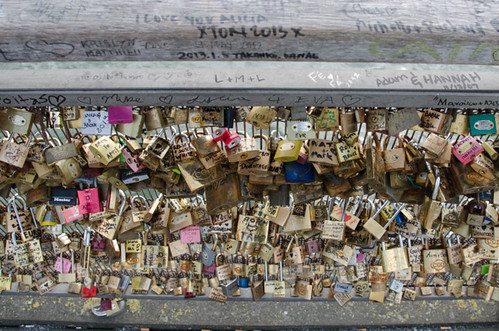 It made me remember something that I read in an article about the Parisian locks. The municipal government had claimed there were problems with love locks and had started removing them asserting they were damaging the structural integrity of the bridges. I thought that was silly, knowing that bridges are always designed to hold far more weight than they are likely to hold at any one time. “What harm can a few tiny padlocks do,” I’d thought. Now as I stared at the wall of industrial strength metal covering both sides of the bridge, I realized this mass of locks was likely to add several tons of continuous pressure weighing down the bridge. When I went home and did some reading, I found an estimate that the love locks can add over 330 pounds of weight to a single section of metal grate. It suddenly didn’t seem inconceivable that the weight could damage the bridge if it applied constant to increasing pressure over many years. I’m not sure what bridge maintenance is like in Paris, but in the U.S. our transportation infrastructure is dangerously under-resourced and one in nine bridges is already structurally unsafe. Even if it didn’t cause complete failure, the locks can still cause problems. In 2007, a lampost on Rome’s Ponte Milvio bridge collapsed under the weight of thousands of padlocks.

Other potential problems with love locks are the pollution of the River Seine from all the rusty keys and the more philosophically objectionable idea that locks represent imprisonment and coercion rather than tenets of love which I believe include freedom and choice. (As an aside, Lovelock Correctional Facility is the name of a real jail in Nevada.)

I don’t actually think the locks are an eyesore, as many local love lock objectors do, and I don’t have any problem with the urban aesthetic of a historic city like Paris changing over time. But I do object to tourists doing things that have potential to damage public infrastructure or the natural environment. I certainly don’t have any research to the assertion that the weight of love locks in Paris could cause a bridge to fail (does anyone know a civil engineer?) but for me personally, I decided I didn’t want to partake. In travel, as in hiking, whenever possible I try to abide by the maxim “take only pictures and leave only footprints.” So this time I came home with my pictures and a changed view of this romantic and otherwise well-intentioned custom.

What do you think about “love locks”?