Of all the forms of transportation you can take to explore a major city, a canoe is probably not the first one you would think of using. As it turns out, it’s a really great way to see Toronto. 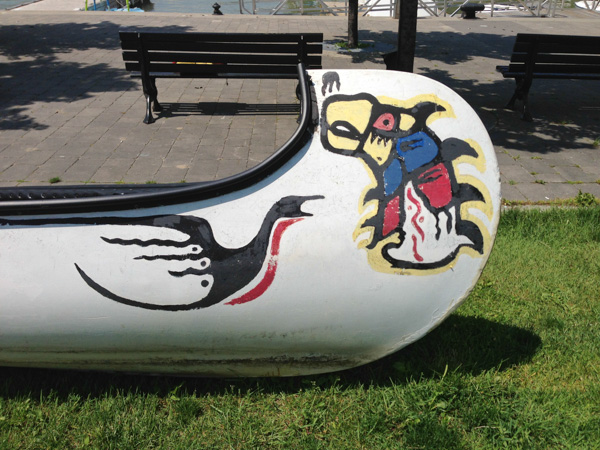 You can’t exactly canoe Downtown — well, except for last week! Instead, this canoe trip takes you through the Toronto Islands, a chain of 14 small islands ringing the harbor, dividing the city from the rest of Lake Ontario. The islands were formed by natural sedimentation over thousands of years, starting in the last ice age. Until 1858, the islands were part of a long peninsula. On a particularly violent spring storm, the eastern span was washed away, severing the islands from the rest of the city. 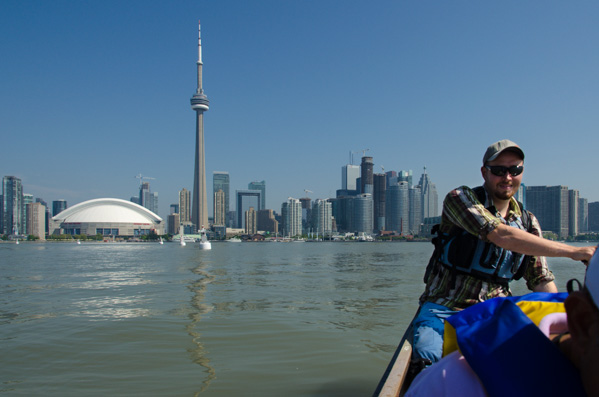 Today, the Toronto Islands house a small residential community, a small regional airport, and more than five hundred acres of parks, beaches, and protected open space. The islands are car-free (only service vehicles are allowed) and on weekends and evenings, they are a popular destination for Torontoans looking to escape the city. You can take a ferry, or as we found out, rent a canoe or kayak and cross the harbor yourself.

Local outfitter, Harbourfront Canoe and Kayak Centre, arranged this group trip prior to TBEX. We joined 12 other travelers in a large canoe, accompanied by two guides to steer and direct the rowing. The vessel was surprisingly stable, and would be easy even for first time paddlers.

As we pushed away from the dock, James pointed out a sailboat gearing up to take off owned The Queens Quay Disabled Sailing Program. This organization has specialized boats and trained staff that give physically disabled adventurers an opportunity to set sail and explore the islands themselves. 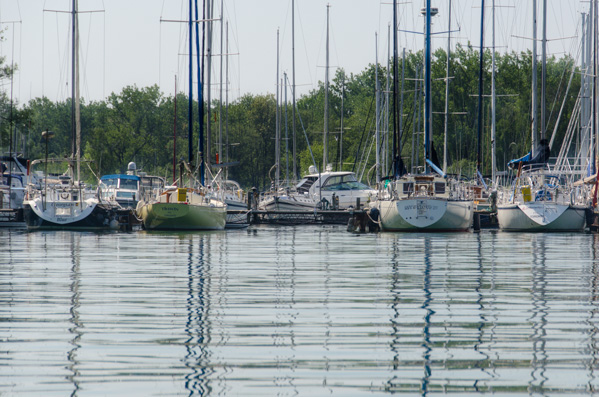 The trip across the harbor took only about twenty minutes. Seagulls flew over head, and we looked back periodically to watch the Toronto skyline get smaller and farther away. We stopped once for a few minutes to let a ferry cross our path. When you are at water level, they are much larger and faster looking than they appear on land!

I’ve canoed a few times before, but I can never seem to get the rhythm right. Over and over, I knocked paddles with the girl ahead of me, as much as I tried to match her pace. Luckily our two guides seemed to be putting the bulk of the muscle into it. 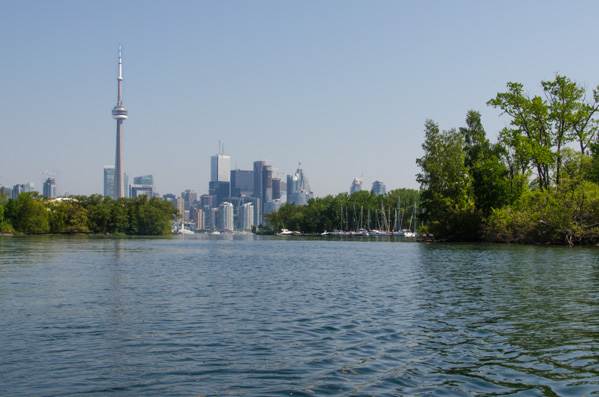 Right after entering the main channel at Blockhouse Bay, I noticed a major change. Though the city was still within view, urban noises had faded away, replaced by the songs of calling birds.

There was something new around every corner. We saw a big parks with paved bike trails, a small marina filled with large yachts, and countless forested channels and lagoons.  We spotted several species of birds including black-billed Trumpeter swans, terns, cormorants, and countless Canadian geese. 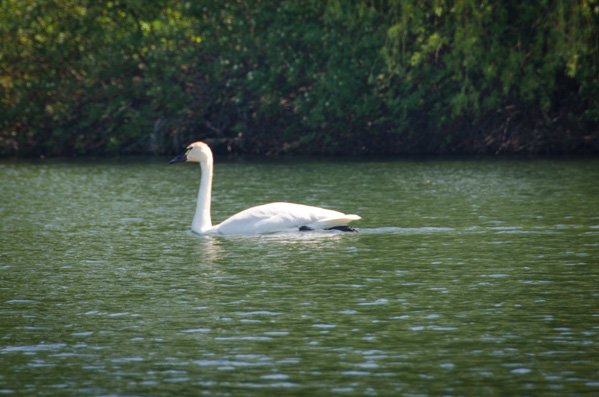 Hoping to see some turtles, our guide James led us into a shallow lagoon. At one point, he even had to jump in the water (up to his knees) to pull us through the entryway. As we floated in silence, scanning the clear water filled with  , we startled a few large fish (pike or trout?) who tossed of sandy front he bottom before jetting away into the depths beyond.

Thinking back to this peaceful place that seemed so far away, I was surprised to learn that this remote stretch of wilderness — the whole island archipelago — is still considered the City of Toronto. 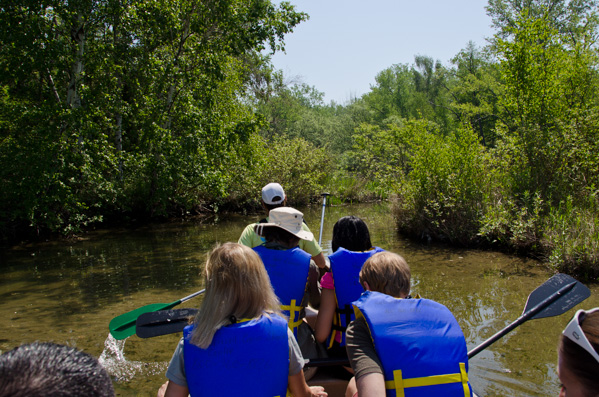 After about an hour of exploring, it was time to head back. The view of the city on approach made nearly every one of us stop paddling to take our cameras out. It’s not often you get an opportunity to see such an expansive view of a city skyline from ground level. 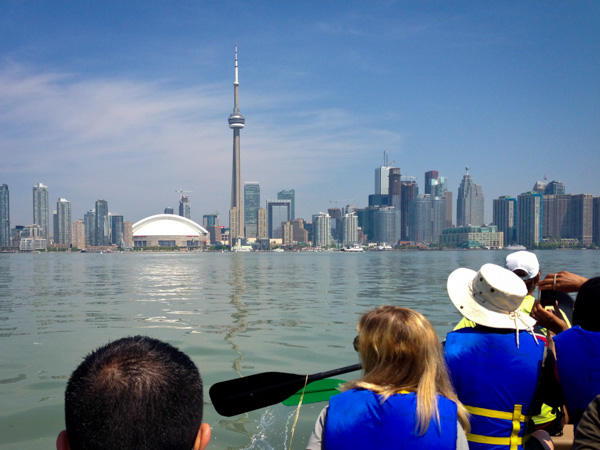 With all the pictures we were snapping, our poor guides did almost all the rowing.

Can you blame us?

Thanks to Harbourfront Canoe and Kayak Center for hosting us on this tour.