I’m afraid of lots of things. Big things mostly, but things that are totally beyond my control. Here are just a few:

When I told Kevin this once, he said he didn’t believe me, saying that if I really carried the weight of all of this around every single day, I’d never be able to get out of bed in the morning. I do hate mornings, but I manage pretty well, considering.

This topic came up in conversation with my friend Jenny last Saturday when we were camping in Northern California’s Anderson Valley. She said she shares many of these fears and assured me that I wasn’t alone.

After dinner that night, we went on a hike into the woods to see the stars, unobstructed from the lights of the campsites. Kevin and I brought our tripod with us and set it up trying to get some good photos of the night sky, framed by the redwood trees. We weren’t having much luck — we’d forgotten the settings to use to get such a challenging shot, and though we were painting the trees with the light of a powerful flashlight, we couldn’t get them to show up in the foreground (see below). So we returned to the campground a little frustrated. 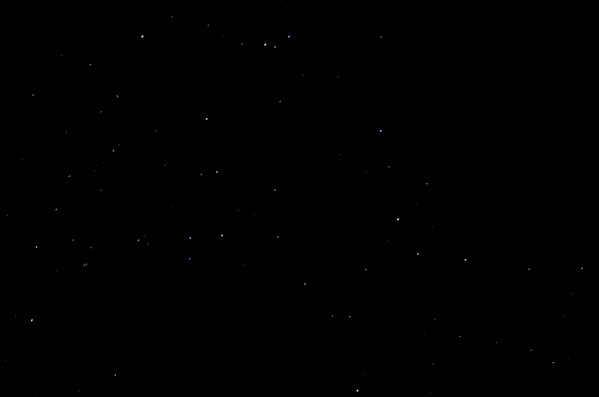 As we turned the last corner before our campsite, I felt something jab into one of my toes. I yelped, and looked down but I didn’t see anything. Kevin asked what was wrong, I explained, and he brushed it  off saying I must have stubbed my toe. I feared I’d stepped on a thorn or something had come through the sole of my flip-flop but I felt around my foot and found nothing.  It was strange, because we were in the middle of a paved road, not on a trail where I might have expected to step on something sharp.

While the pain had fleeted, I noticed my four smaller toes were starting to feel numb.

My friend Jenny caught up with us and I explained what happened. “Did you look behind you to see what it might be?” Thinking it was in my shoe, I hadn’t, so in unison, we turned our heads to scan the blackness of the ground behind us. A few feet away our headlamps settled on a still, dark object on the pavement.

“A fucking scorpion!” I exclaimed. I couldn’t help it, my mind was racing with everything I’d ever heard about these venomous, predatory animals. My first thought was that I needed a photo, right away so it could be identified. Despite my near panic and repeated profane outbursts that I’m sure were waking the children asleep in nearby campsites, I pulled out my phone and took this photo.

I knew that there were deadly species of scorpions in the arid deserts of Southern California, Arizona, and Baja California, but I’d never heard of scorpions in the cool coastal forests of Northern California. I knew it was unlikely it was poisonous, as I hadn’t seen any warning signs posted in the park. Still not knowing for sure that it wasn’t poisonous I was in a nervous daze, not knowing whether to laugh or cry. My friends were equally stunned but got right to work to help out. Jenny took off for the park office to find a ranger, and Kevin ran to the campsite to grab something to capture it. I hobbled to the camp site, to do all I could think of doing: Take a Benedryl and attempt a Google search to understand my risk.

Luckily the unstable, far off cellular signal held up and I got the reassurance I needed that scorpions are common in the forests of Mendocino County and unlikely to be dangerous.

As my panic subsided and heart rate slowed, I realized that of all the things I’m afraid of, I’ve never been afraid of bugs.

Stinging bees, wasps, biting ants and spiders in the wild are a curiosity and sometimes an annoyance, but nothing I’ve ever feared. Even in malarial regions, I’ve taken the recommended precautions but never thought too much about mosquitos. Just weeks ago, in San Javier, Mexico, when my tour companions panicked upon finding a small scorpion on a toilet seat, I was eager to get a look at it. Deadly or not–with the former certainly likely in the Baja desert!–I wasn’t afraid.

It’s kind of funny. Of all the things to fear in this world, and the time and energy consumed by my anxieties, the one I was least afraid of was the one that actually happened!

While I know I should take this as lesson to let what happens, happen, I’ll probably just use it to justify more neurotic behavior.

Now that’s something to be afraid of!