In the Loreto region of Baja California Sur, Mexico you can find beautiful beaches, grand resorts, and wildlife adventures that rival the Galapagos. But to learn about the area’s history and get a glimpse into Baja’s rural present, you need to travel the road to San Javier.

[ By the way, the road is literally called “The Road to San Javier”. Check out this map. ]

San Javier is a small community located about an hour and a half from Loreto, climbing west through the Sierra de la Giganta mountain range. The town is home to Mission San Javier, one of the oldest and best preserved of all the Jesuit missions in Mexico and the US. Because I was traveling on a tour and not driving, I was free to gaze out the window at the desert landscape punctuated by jagged rock and slender cardón cacti. 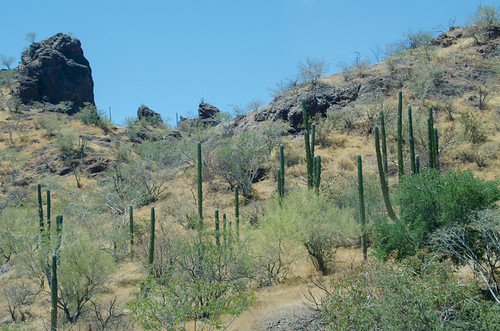 As we climbed the hills, our guide Roberto, talked about the cultural history of the area.  The Cochimí, the native, nomadic people of the Central Baja region, survived by fishing on the coast and gathering small edible fruits and seeds in the desert. It was a hard life and war against other native tribes, and disease brought by the Spaniards killed them off completely. There are few known ancestors to these native people still alive in Baja.

We stopped about 40 minutes into the drive to hike along an arroyo in search of evidence of these native people. We found a nearly exposed rock wall, with two remaining cave paintings. 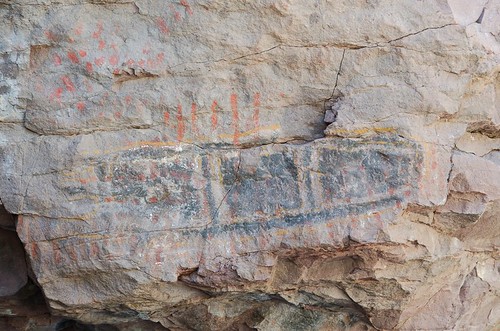 The paintings depict the top and bottom shell of a sea turtle, obviously of interest when fishing was a big part of their livelihood. 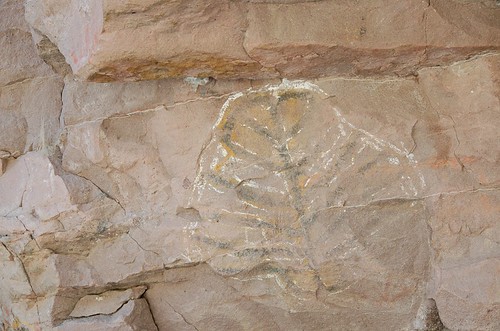 In areas we could see evidence of graffiti, and places where pieces of the paintings had been pulled off by vandals. It was very sad.

As we returned to the van, Roberto identified the trees we passed. He paid special attention to yerba de la flecha, a venomous native tree. He said that if you touch the bark even briefly and then rub your eyes, it can cause a strong allergic reaction and even blindness. I was careful not to touch ANYTHING as I hurried back to the van.

The road signs warned of “camino sinuoso“, which I thought was a pretty way to say winding (or “sinuous”) road. Our driver, Fausto, navigated our small van confidently, though it was the least of the hazards.

A four-year drought had left the soil hard and parched, so that when the area finally got a normal level of rainfall last winter, the torrential run-off washed away large sections of the recently paved road. 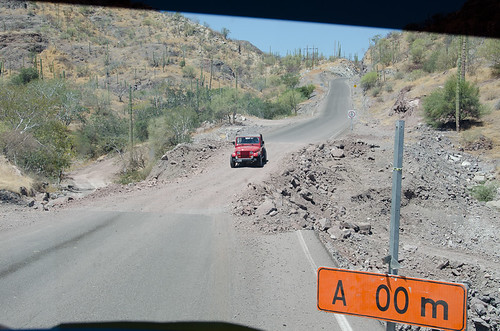 In broken sections near the steepest cliffs, I was really glad I wasn’t driving. 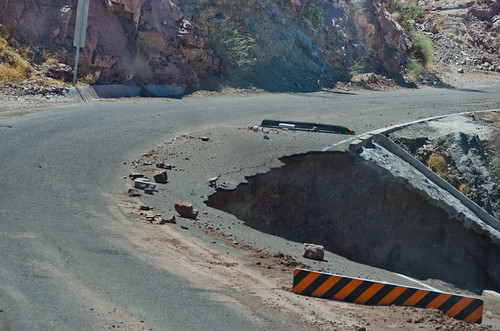 We passed only one manmade structure on the long drive, about an hour in when we came to a small chapel, at Rancho Las Parras. 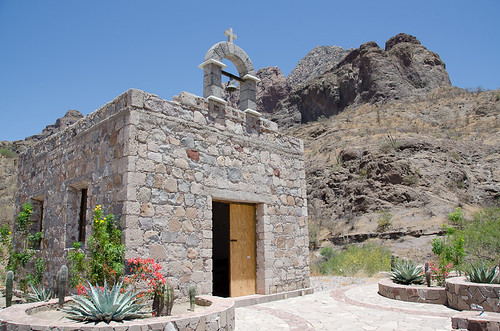 Each year, during the Feast of San Javier (December 1 – 3), Catholic pilgrims from around Mexico come to Loreto to hike or ride donkeys up the hill to the San Javier cathedral. This chapel was built as a place for pilgrims to stop, rest, and pray before finishing their trek. 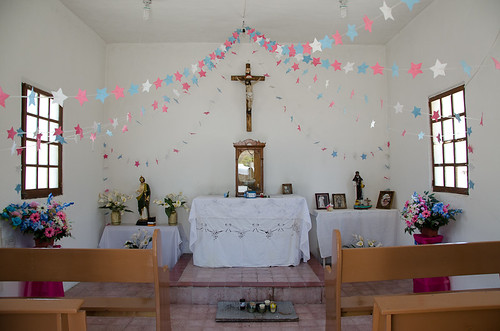 The property was previously owned by the De los Santos family — three sisters who, prior to the youngest’s death, sold the property to a Loreto businessman for just a few hundred dollars. The sisters were all buried on site. 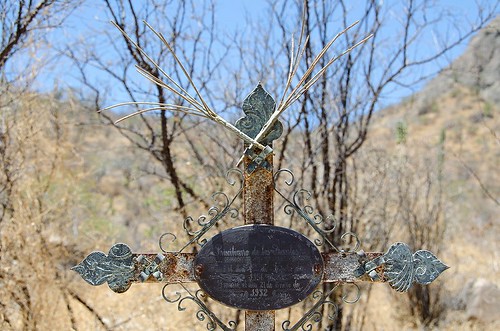 When we finally got to San Javier, it was even smaller than I had envisioned it. There was only one primary street running through the town that ends at the massive cathedral. About 200 people still live in the town, mostly elderly people and women with small children. Like much of rural Mexico, the working-age men have moved elsewhere seeking economic opportunity. 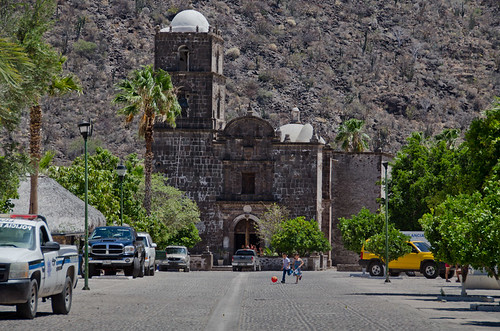 After the long drive, our first stop was “Restaurante La Palapa” to use the restroom. I bought a cup of homemade vanilla ice cream from the woman at the register. As soon as I cracked it open, a little dog came in from the street, eager for a taste. I didn’t feed her, but I couldn’t bring myself to shoo her away. She took advantage of my attention and walked all over me. 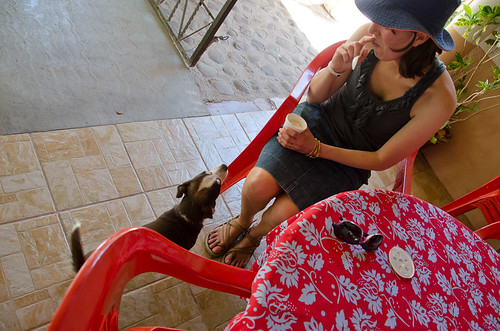 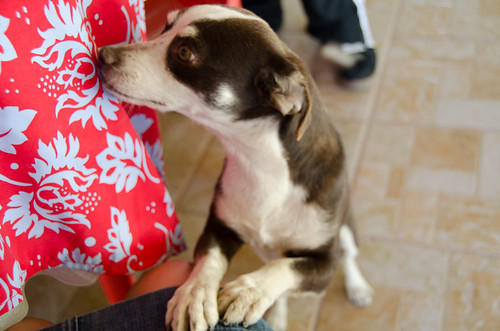 Finally, we stepped over to the cathedral. 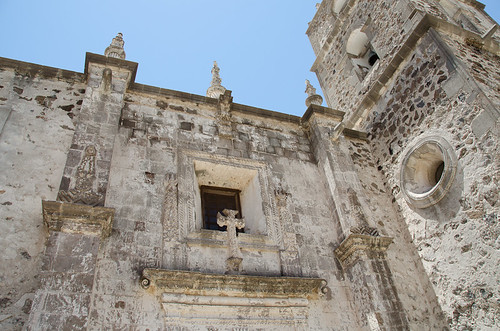 I live in Alta California, so I’ve visited many of the missions that dot the state from San Diego to San Francisco. Though this is the second oldest (construction began in 1744), it was certainly the most well-preserved mission I’ve ever visited. The structure and the decorative elements were all fully intact, having survived the centuries including some devastating earthquakes. The mission’s parishioners consider this a miracle. 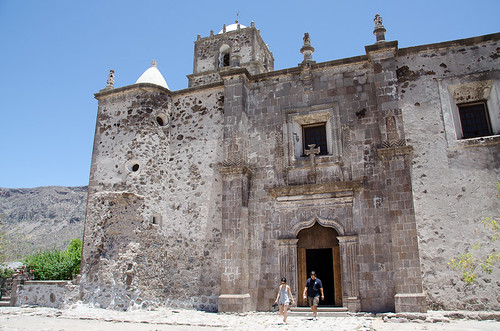 As we went inside the mission to view the gilded altar and original woodwork, our dog friend followed. 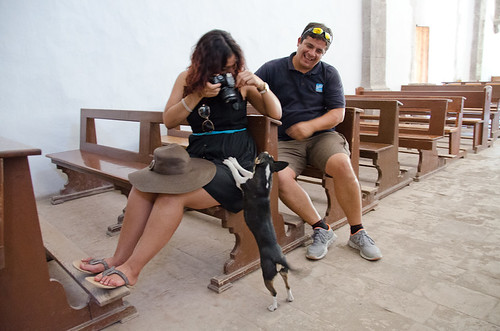 Roberto walked us around the grounds, showing us the land that’s being cultivated by some of the town’s residents. There were grapes to make wine… 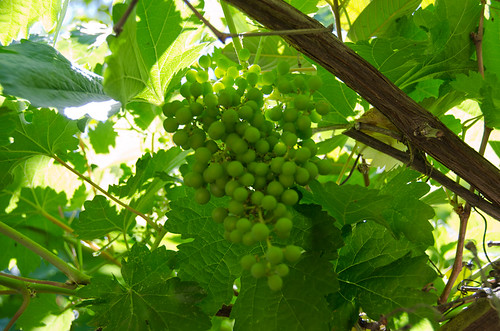 and the oldest olive tree in all of The Americas. By this point, we also made another canine friend. 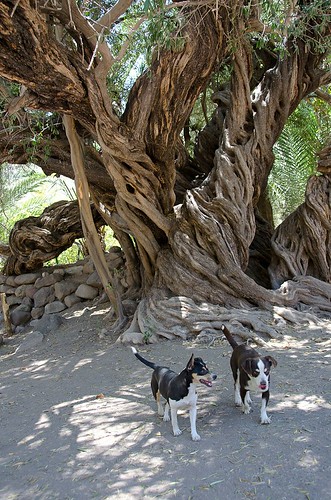 After touring the grounds, we returned to the Palapa San Javier restaurant for lunch. Because I’d ruined my appetite with ice cream, I took the opportunity to walk through the town. There were three small restaurants, a police station and several personal homes. Kids played in the yards, and old men sat on their porches looking at me curiously.

There was only one store. A woman sitting on the porch told me it was an artisan market and waved for me to enter. Before doing so, I stopped to salivate over the locally made honey and wine from the grapes we saw behind the cathedral. 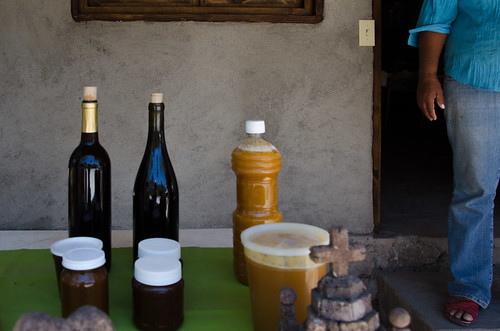 The one-room structure housed a diverse collection of local handicrafts including embroidery, rugs, quilts, pottery and a handful of books about Baja’s history and culture. Framed photos of local craftspeople were mounted on the wall above the products they are creating.

This was the San Javier Market and Cultural Center, a project of the organization, Living Roots Baja. Living Roots is a nonprofit that seeks to preserve the cultural traditions in San Javier and the surrounding ranchos by providing a place for local people to sell their crafts. This is a precious opportunity to earn a living in an isolated community with few jobs, enabling local people to stay in the community while preserving their cultural traditions. Sadly, there were few tourists in town the day we visited, so I’m only cautiously optimistic of its impact. If you visit San Javier, be sure to stop in and check it out! 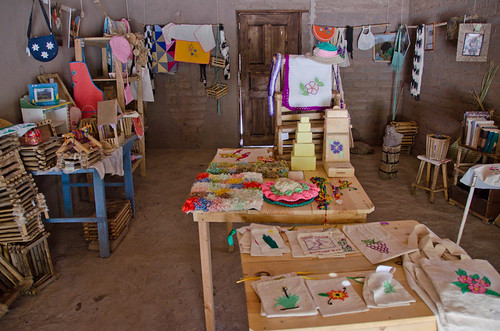 After noticing the time, I said my goodbye, rushing back to my group so we could begin the trip back to Loreto.

On the drive home, we stopped at a corner, for an expansive view of our day’s journey. We could see from the deep blue Gulf of California to the peak of our ascent, the depths of a palm-filled oasis to the modern road meandering the hills. If I squinted, I could even see the original Jesuit settlers’ dirt trail. I thought about the seasonal rains that are so destructive, but so important to this arid environment. I imagined the Feast of San Javier pilgrims climbing the trail in the blistering sun to fulfill their spiritual duty. And I thought about the young people leaving their families in San Javier to pursue a better life.

The road seemed long to me but for the people who have lived in this isolated and unforgiving environment over the centuries, I can only imagine the road was endless. 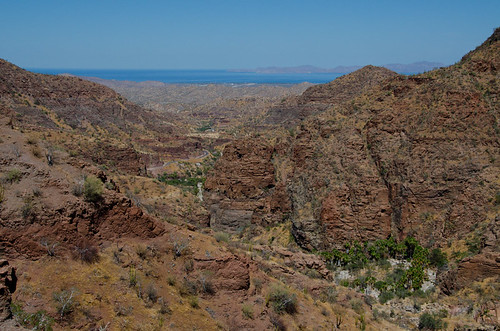 On this trip I was a guest of Villa del Palmar at the Islands of Loreto. Opinions are, of course, my own.