There are two different travel scenarios that were repeated ad nauseum in my high school Spanish textbooks. The first, involved a shopping trip to Spain’s monstrous department store chain, El Corte Inglés. I get it, the excitement over one-stop shopping–especially in those dark days, back before we had Amazon. 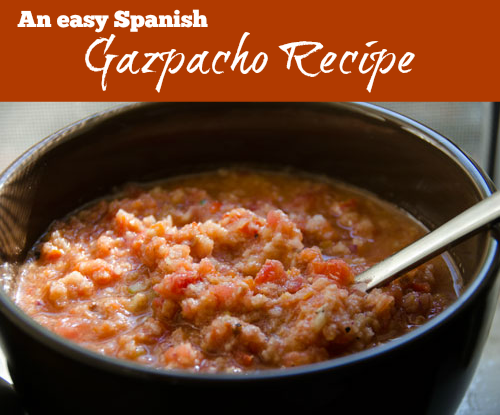 The second scenario involved travelers entering a restaurant in Spain and ordering gazpacho. I never understood my instructors’ fascination with gazpacho. As a teenager, back before I developed an adventurous palate, the idea of “cold tomato soup” sounded less than inviting. But I loved the sound of the word (especially when pronounced Castillian style, with a bit of a lisp — “gath-pa-cho”), so I used it–and giggled–every chance that I could.

Fast forward several years to a trip to Seattle. I stopped into a little cafe outside of Pike Place Market and saw gazpacho featured on the chalkboard as the soup of the day, so I had to order it. I fell in love! It has so many flavors that I love–fresh tomato, garlic, onion, lime and vinegar. Because I couldn’t find it anywhere, I started to make it myself.

When we went to Spain a few years back, I was excited to visit Andalucia (the dish’s home) and eat gazpacho by the gallon. Unfortunately, it was February and I found that most places don’t serve gazpacho in the winter. I get it. Gazpacho is best when it’s ingredients are fresh, flavorful and in-season. But I was still disappointed. 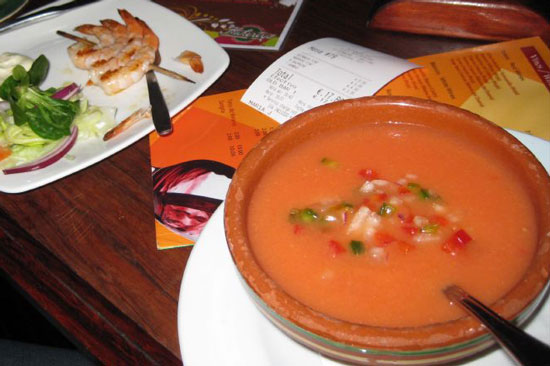 The only gazpacho I could find in Sevilla in the winter, at a pub owned by Irish expats.

I told my friend last week I was going to the farmers market and would spend this week on a gazpacho-making spree and she recommended this recipe, so I figured I’d use it as my guide.

The recipe called for seeding and peeling tomatoes which is against my religion (a waste of perfectly good tomato!) so I opted not to do that. I also didn’t seed the peppers, because I wanted to add extra heat. The recipe didn’t include any stale bread, as is typical in Spain, so I threw some in. Otherwise it’s similar to the original recipe. 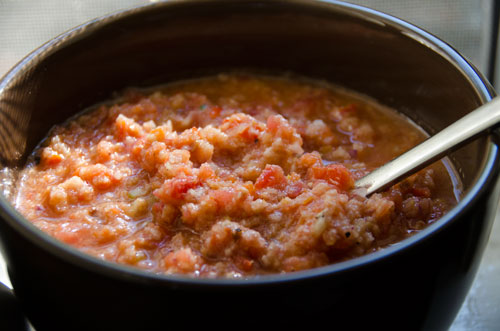 I like it chunky, but you could puree it even more. I understand that in Spain, it’s often very smooth and served in a glass.

Coarsely chop the tomatoes and place the tomatoes into a large mixing bowl. Dice (or chop using a food processor) the cucumber, bell pepper, red onion, jalapeno, and garlic. Combine the tomato with the diced mix and add the olive oil, bread crumbs, lime juice, balsamic vinegar, cumin, salt and pepper and stir to combine. Transfer 1 1/2 cups of the mixture to a blender and puree for 15 to 20 seconds on high speed. Return the pureed mixture to the bowl and stir to combine. Cover and chill for 2 hours and up to overnight. Sprinkle with chopped, fresh basil before serving.

Give it a try, and let me know what you think!

Share8
Tweet11
Pin19
38 Shares
« ExOfficio vs. ScotteVest Travel Boxers: A Ballwicker Showdown
How To Get A Southwest Airlines Companion Pass »