I’m afraid of things. Lots of things. I imagine what would happen if a massive earthquake struck every single time I ride an elevator, drive over a bridge, walk near the edge of a cliff, or let a dentist enter my mouth with a drill.

(As I write this, I’m holed up inside my local library because my next door neighbor just had their house tented for termites and I’m afraid to go home as I envision the toxic fumigant seeping through the cracks of our windows and doors. The exterminator told me it is safe to be there but I don’t believe him.)

This constant, low-level paranoia is not usually based in reason, but I can’t help it.

When I’m traveling, this obsession with disaster kicks into overdrive. Arriving in Hawaii, horrific images from Typhoon Hiayan in the Phillipines were top of mind as well as visions of the tsunami at Fukushima, the 2010 earthquake in Haiti, Hurricane Katrina on the Gulf Coast, and the Indian Ocean tsunami in 2004. To me, coastal paradise = natural disaster. 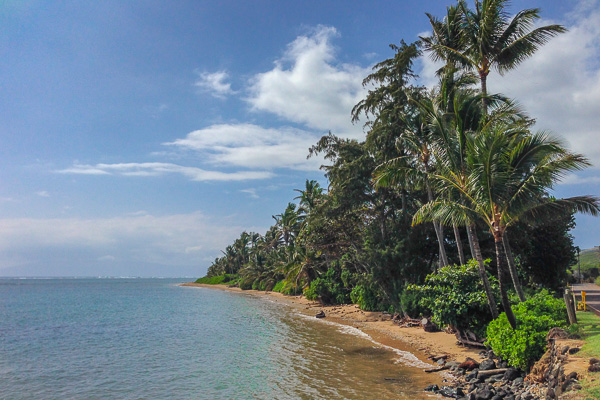 I got out of the car somewhere on the remote eastern side of the island of Molokai to take the photo above. I stood there playing with the settings in the photo app I use on my phone, when an ear-splitting alarm blasted from a speaker mounted at the top of a nearby telephone pole. We were not near a fire station, so I realized it had to be the tsunami warning alarms that I’d heard coastal communities often have. I’d left Kevin back at the car so I ran back as fast as I ever have, my heart pounding with ever step. I didn’t know where to go or how to avoid the coming wave. I knew we needed to drive up the volcanic mountain at the heart of the island but I had no idea how to get there. I only knew about the coast road that rings the periphery of the island.

That’s when I noticed that under the din of the alarm, I could hear the familiar U.S. emergency broadcast recording I’ve heard many times on the radio and TV.

Thankfully we’d been listening to the radio and not snorkeling in the water off an empty beach as we had done just an hour before. I don’t know what I would have done if I’d heard this while completely disconnected and alone.

As my heart started to slow down and we took off down the road, I shot this video of the siren (WARNING: Turn down your volume–it’s loud!):

Afterward, I felt better knowing the alarm system works, and I could go back to thinking about what is really important in Hawaii: