After leaving Valparaiso and taking a bus back to Santiago for a late night flight to Lima, we spent the rest of the night sleeping on benches at the Lima airport waiting for our 5:25AM flight to Cusco.  Actually, it was even worse than that, because we had to wait about two hours, until 2AM, before the domestic terminal opened, meaning we had to stay up until about 4AM body time (accounting for the odd two hour time difference between Lima and Santiago).

All of this is to say that the last two days have been a bit of a blur.  And for all those travelers who get the bright idea to spend the night at the airport, I wouldn’t recommend it.  I’ll leave it at that.

But this morning, I’m writing from the heart of the Inca Empire.  Cusco and the surrounding towns have a vibe to them that is difficult to describe.  You have to see this place to believe the buzz that courses through you.  Of course, that could just be the combined effects of the altitude, the coca leaves, and exhaust fumes from all the tourist buses.  Only kidding, this place is incredible, and we don’t visit Machu Picchu until tomorrow! 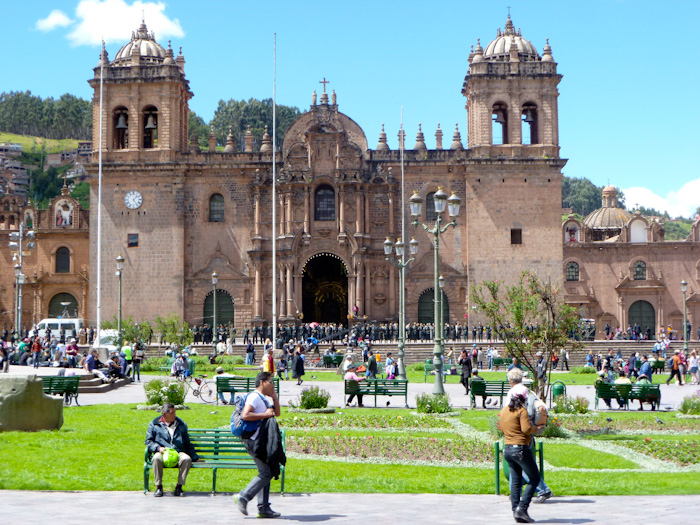 It’s easy to fall under the spell of this exotic place.  In the mornings, a fog hovers over the impossibly green Andes ridges.  Then, the sun peaks through and lights up the towns with their red tile roofs.  As you meander through a maze of alleyways and cobblestone streets, you can easily imagine yourself living in the 16th century, just after the Spanish arrived.  It’s not hard to do.  All around you are reminders of this time, and the town of Ollantaytambo still looks nearly exactly as it did in that time period.  It is truly a living museum, just as your tour books will tell you. 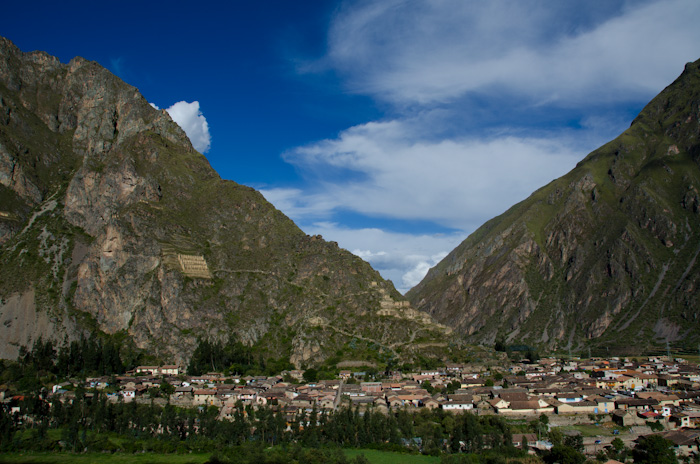 Above the town of Ollantaytambo, Sacred Valley, Peru

But back to the present for a moment, as we spent our first morning in Cusco with two goals in mind:  avoid altitude sickness and finally somehow secure our tickets to Machu Picchu and for the train ride there.

The first turned out to be a little easier than we feared.  We took deep breaths, walked at a measured pace, and went to the market to seek out everyone’s favorite local remedy for altitude sickness, coca leaves.   We found our hostel, took a nap, and the one smart thing we didn’t do was start tossing back pisco sours.  Cassie’s personal theory on altitude sickness is that a lot of people come to Cusco, dehydrated and tired, and try to “rest up” at the nearest bar.  According to the locals, it’s the worst thing you can do.  Even still, both of us were so worried about getting that dreaded splitting headache that we felt psychosomatic effects.  “Am I getting sick?  No, I’m still ok.”  It’s not a lie if you believe it.

Going slightly off-topic for a sentence or two, I want to add that if you’re trying to picture Cusco’s central food market, first imagine going to Whole foods, then take away the high prices, the tiny shopping carts, the multi-colored organic labels on everything, and the antiseptic atmosphere.  Ok, it’s nothing like Whole Foods, but many of the foods for which soccer moms pay through the nose are native to this region.  Peruvians eat like Kings. (We’ll have a much more expansive post on this later, as this is tightly connected to Inca history.)

After the market and our nap, we set off on our second mission:  Getting to Machu Picchu.  You would think this would be easier, what with every (long pause) single (another long pause) person in town trying to sell us a tour of the place.  But having read about the unethical behaviors of many tour companies, and also needing to be there at sunrise for my shot at that iconic postcard photo, we wanted to book this trip ourselves.  In order to do that, one needs a) a ticket to enter the site and b) a train ticket to get there.

There is a government website for Machu Picchu tickets, and Perurail has a website as well, but both are difficult to use, and wouldn’t accept my credit card, either.   As a result, I wasn’t able to buy either ticket before we arrived in Cusco.  Long story short, we had to navigate the previously mentioned maze of streets in Cusco, asking several people for directions, but since the streets have confusing names (and multiple names, since there are Spanish and Quechua names for many streets), this resulted in a lot of frustration (and cursing).  Finally, we stumbled upon the Perurail office in the main square, and we got our issues squared away.  We’ll have another post on how to make your experience much easier. 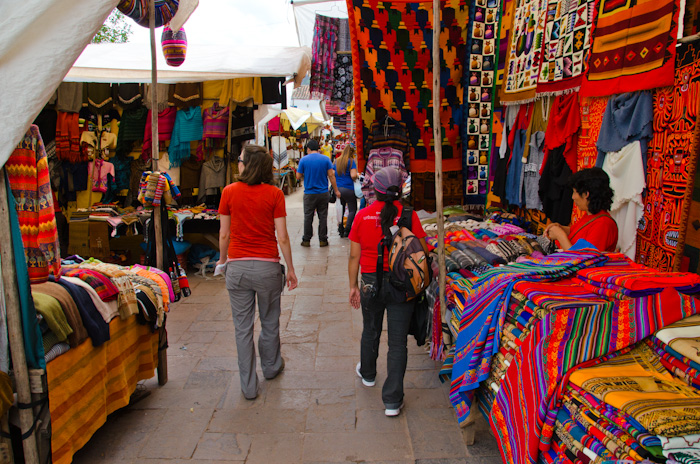 And finally, to catch you up to the minute on our travels, yesterday, we took a fantastic tour starting in Cusco and taking us through several towns, the famous Pisac market, and two Inca sites.  Cassie won an online contest from the Urban Adventures tour company, and neither of us had any idea what to expect.  I figured we’d be crammed into a large bus and shuttled between tourist traps.  But it was free, so it was a no-brainer, right?  Instead, though, we had our own private tour, with a guide and a driver picking us up from our hostel.  We ate a fantastic traditional lunch in the home of a family in Urubamba, and also got our own private pottery demonstration.  In what is becoming a recurring theme, we’ll have more detail on this later as well. 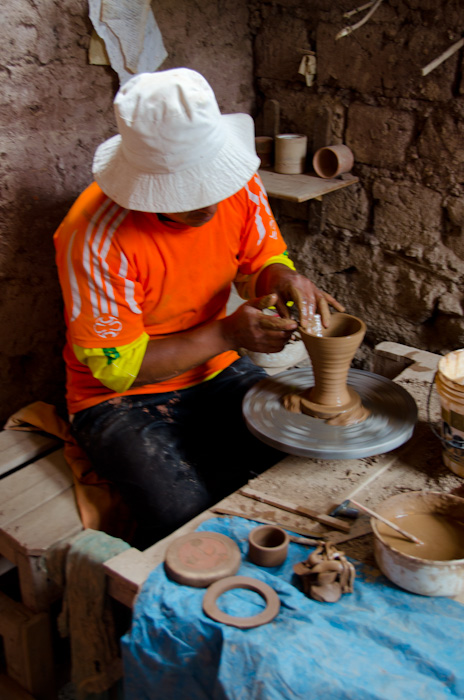 We ended the day with a tour of the Ollantaytambo ruins, which are pretty impressive by themselves, but we know it’s just a warm up for tomorrow’s day at Machu Picchu.  Both Cassie and I are very excited, to put it mildly.  We’ll try not to hyperventilate. 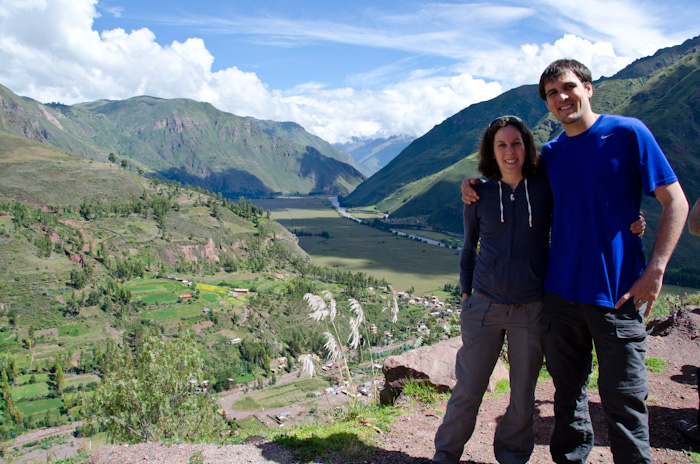 Cassie and I from a mirador above the Urubamba River