Earlier this afternoon, I called my dad while I was out walking the dog. It had been a few weeks since we had talked because of our recent trip. He had lots of questions.

“So you were in Italy and then Malta, right? Wait, where IS Malta?”

I’ve answered this question a lot over the last few weeks, so I figured it was a good place to start in sharing my experience. Lots of people aren’t familiar with this small country–I couldn’t have placed it on a map with 100% certainty up until a few months ago. (“Um, somewhere near Greece?”)

Malta is a European island nation in the Mediterranean Sea, lying between Sicily, Italy (50 miles north) and Tunisia (175 miles west). At only 122 square miles, Malta is one of the smallest countries in the world, which partly explains the lack of name recognition.

Malta is technically an archipelago of seven islands, but only three are inhabited: Malta (where the urban capital and most of the country’s 423,000 people reside), Gozo (a smaller, rural island–that’s where I stayed), and Comino (or Kemmuna, in Maltese–see map below). Comino is a small, rocky island between the two–there are no cars on the island, no public services, and it’s mostly uninhabited, but it is a popular day trip destination due to one very popular beach. Comino has either 3 or 4 residents, depending on who you ask (these people seem to be a local urban legend–we kept asking about this family and everyone gave us a different count). 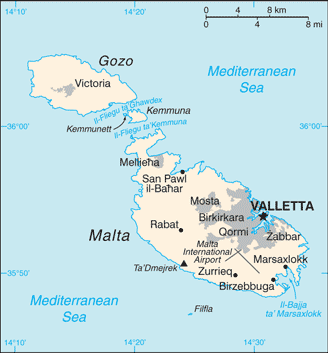 The Maltese islands were considered a strategic location between Europe and North Africa, so throughout history they had a frequent succession of rulers. The Phoenicians, the Romans, the Moors,  Normans, the Sicilians, the Knights of St. John, the French, and the British all fought for and controlled these islands. After centuries of conflict, walled cities and medieval fortifications still remain wherever you go.

The islands have two official languages: The homegrown language, Malti, and also English, after more than a century of British colonial rule. Malti is related to, and sounds a lot like, Arabic but the script (with pointed accent marks and dashes through letters) looks like no written language I’ve ever seen. Though most locals spoke Malti among themselves, they would switch to English immediately when they noticed I was a traveler. I found this somewhat comforting after having been in Italy right before, where language is a bit more difficult. I was traveling with an Italian woman and we noticed that most people also speak flawless Italian. I was told this was because they grew up watching Italian television.

The cities are sand-colored. The sprawling and densely populated communities around Malta’s capital, Valletta, were particularly faded, though there were occasional bursts of color on windows and doors.

We stayed on the island of Gozo. The peaceful island is a growing eco-tourism destination with rugged rocky cliffs, small sandy bays, tiny and scenic coastal hiking trails that circle the island. Gozo is a popular weekend travel destination for Maltese city-dwellers, and it makes a great base for exploring the country.

There aren’t many places in Europe that can be considered “off-the-beaten path,” but Malta (and more so, Gozo) are as close as it gets. I was on the islands for only four days and I took close to 1,000 photos that I’m currently wading through, so I can use them in future posts. Stay tuned!