When Kevin’s brother discovered that he would not be able to make a chocolate tasting event he had bought tickets for, we oh-so-reluctantly offered to take them off of his hands. 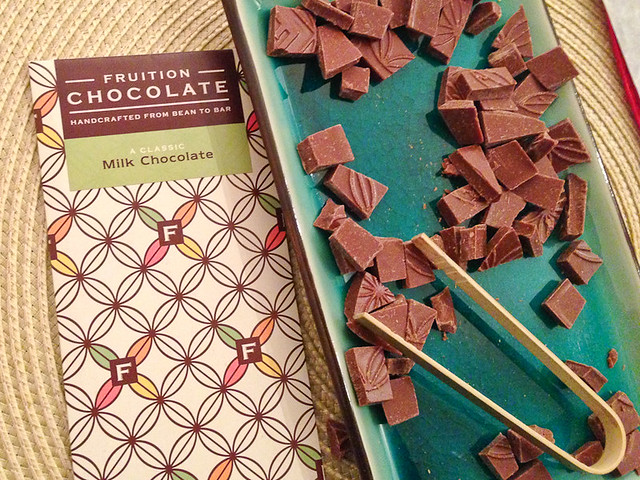 We know a lot about craft beer, local, artisan and wild-foraged foods, but this event was our introduction to the world of “craft” chocolate. The event was held at The Chocolate Garage in Palo Alto, CA. There are a fair number of chocolate and pastry stores in fashionable Silicon Valley, but none like this. The tiny shop only carries small-maker, bean-to-bar chocolates, which means they are made by producers that control every step of the chocolate-making process, from harvesting the beans to crafting the final product. This attention to process allows them to create the highest-quality chocolates and by cutting out the middlemen, they pay the farmers higher wages and encourage them to experiment with quality and more sustainable growing and processing techniques. The owner, Sunita de Tourreil, calls her line of business selling “happy chocolate,” delicious chocolate that also has a positive impact on workers and communities. 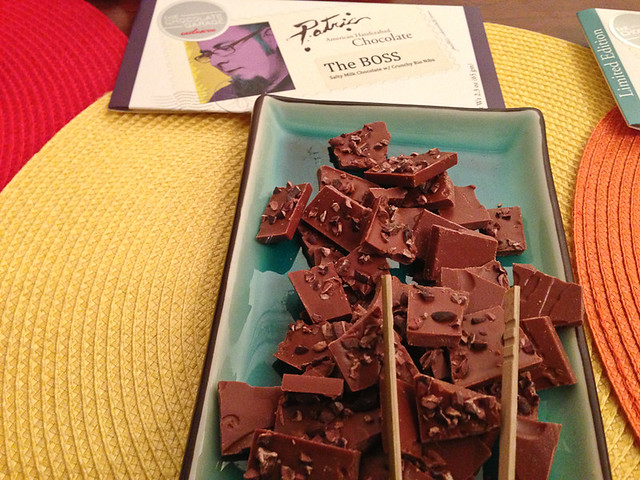 The chocolates they stock are also microbatch chocolates, which means they are made in such small quantities, you are not likely to find them anywhere else. Many times de Tourreil, actually buys the entire batch in advance of production, so she is the sole vendor of that product. To do this, she sells “futures” to her chocolate-loving customers. Futures are an up-front investment that customers can apply as a credit towards future purchase, along with a per bar discount.

The pairing event started with a talk about the chocolate making-process. Despite all the chocolate I’ve eaten in my life, I never knew much about what goes into it. We got to see how enormous a cacao pod is, which is the fruit that encases the cacao beans. In the photo below, Kevin is holding the cacao pod. The red cacao beans on the table are the beans from which the chocolate is actually made. 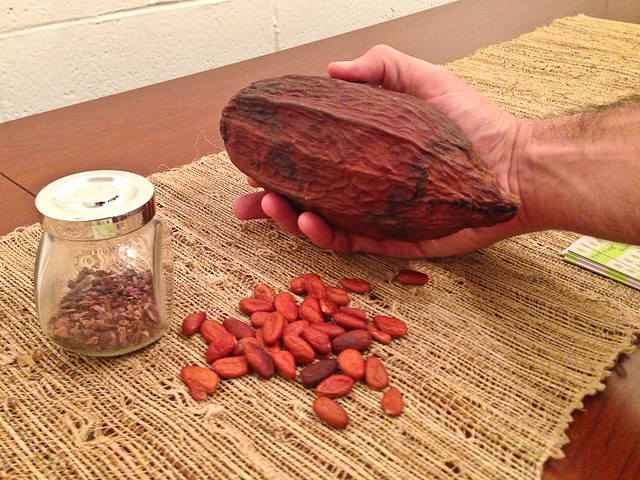 Some interesting things we learned:

Armed with this information, we did a blind chocolate tasting of simple, dark chocolates, all bars were just beans and sugar with no milk or added flavors. We were asked to taste the four chocolates that were laid out and try to guess the which ones they were from a set of four different American makers who sourced their beans from different countries. I did terribly, though I was able to correctly identify the chocolate that used beans from Madagascar. The reddish color gave it away. Still, the difference in flavors was remarkable! It’s amazing how much of a difference the bean makes in chocolate. 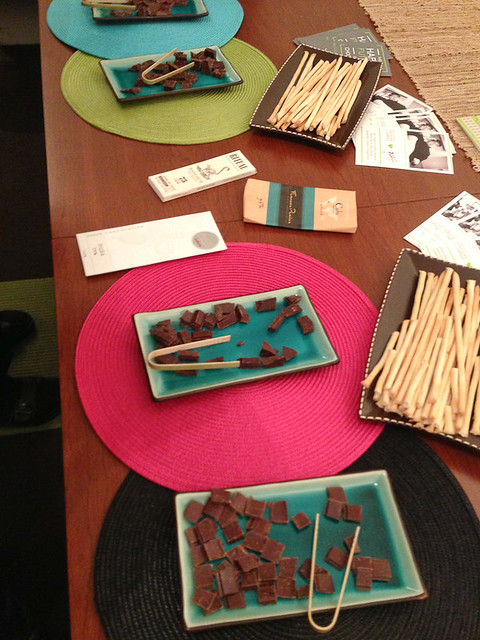 We then tried a few more chocolates, this time they were flavored, either with milk chocolate, chocolate nibs, or flavors added like, salt, caramel, and licorice. We even got to try a chocolate from Nicaragua that had a whole cacao bean in it. 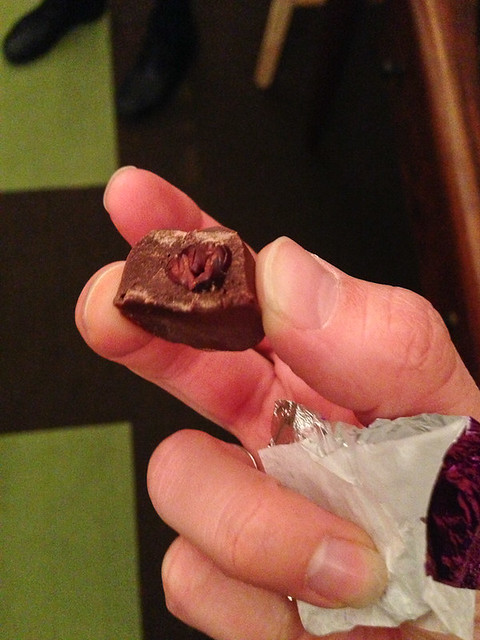 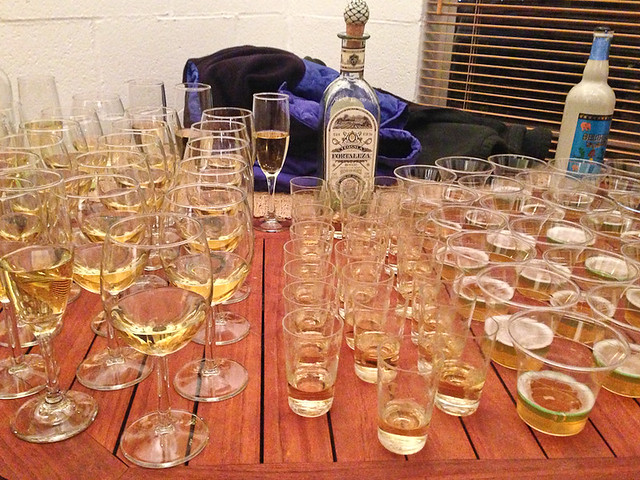 I have a terrible palate for telling what makes a good wine and food pairing and tea and food so I knew I wouldn’t be good at this. When I was told what the suggested pairing was, I could recognize how the beverage intensified the flavors of the chocolate. But I would have been able to tell on my own when when a pairing was bad. It takes a lot of practice to do this well.  I gave up and just enjoyed them all. 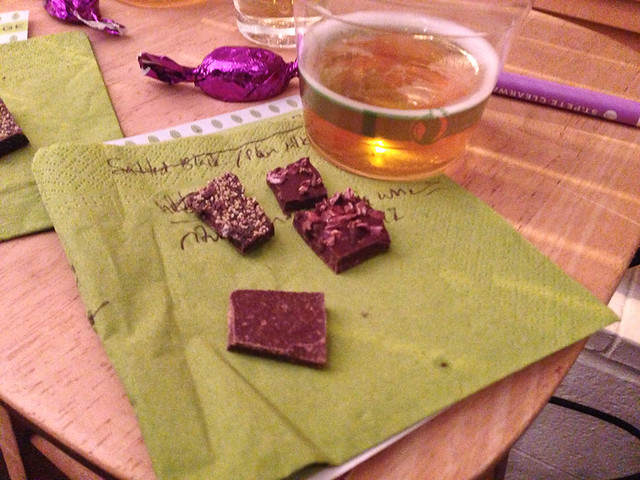 After the pairing, we were left to continue to sample as much chocolate as we wanted of those that were still laid out. I did my best to make sure nothing went to waste!

At the end, we were were allowed to take a bar of our choosing home with us.  In her tiny store, she displays all of the chocolates on the walls as if they were art. Appropriate, after learning all we had about the craftsmanship that went into each one of these beautiful bars. 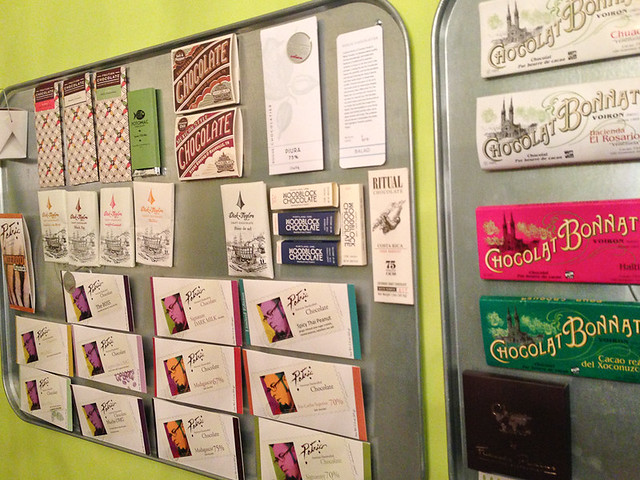 One example of how beautiful these chocolates are is this bar that we took home. You can see how flawless, shiny, and rich this bar is. We ate it over the course of a week, breaking off a tiny piece to savor each night. 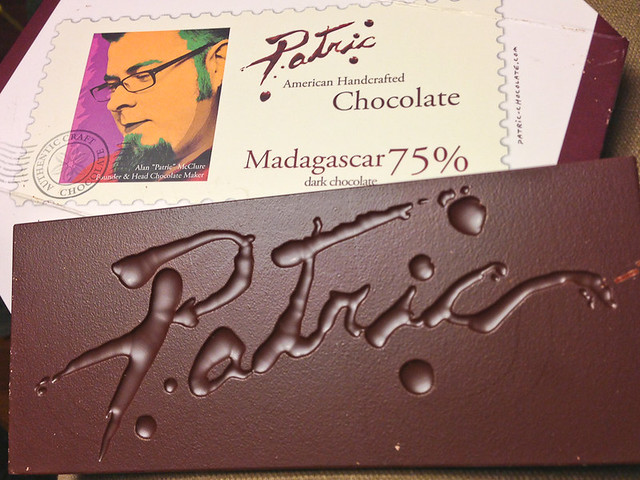 Even though I’m still not a chocolate pairing expert, it was very informative and gave us a new appreciation for the flavors and craftsmanship of good chocolate.