You are here: Home / Destinations / United States / California / There Is Such A Thing As Too Much Garlic
Share17
Tweet10
Pin208
235 Shares

I used to say that there is no such thing as too much garlic.

I would push the envelope of how much I can use, sometimes quadrupling the amount the recipe called for. Then one night Kevin and his brother prepared a batch of fresh basil pesto. In a bit of arrogance, they added something close to 20 raw cloves. It smelled heavenly, but after just a few bites burned their way down my esophagus I realized we had made a terrible mistake. Since then I’ve been much smarter about the amount of garlic I consume.

This week marked the 35th annual Gilroy Garlic Festival in Gilroy, CA. I’d wanted to go to this locally famous food festival since I moved to the San Francisco Bay Area back in 2007, but each year something would get in the way. Mid-last week when I found out it was the next weekend, I bought my ticket right away. Only then asking around to see who wanted to go. My friend Cesar said he’d join me, as he grew up close to Gilroy and had good memories of the festival from when he was a kid.

We packed up early in the day planning to arrive right when they opened so that we’d have room to move. I heard the crowd later in the day can be unbearable.

I was eager to try as many unique things as I could, and the merchants didn’t disappoint. Rows of small specialty food producers, were giving out samples of unique garlic-y creations. There were garlic-infused olive oils, vinegars, mayonnaise, hot sauce, mustard, and even a sweet and spicy garlic jelly. Next to these were cooked-food vendors selling all manner of pungent, garlicky foods like garlic fries, garlic onion rings, and garlic stuffed mushrooms.

On a rumor that we might be able to find a garlic wine, we bought tickets to use in the Wine Tent. Sure enough, Gilroy’s own Rapazzini Winery was pouring samples of two different garlic-infused wines, Chateau de Garlic Red and  Chateau de Garlic White wine. Both were meant to be used for cooking, though on recommendation from the volunteer at the booth, I went with the white, which she said was surprisingly drinkable. And it was, despite the somewhat acidic and alcoholic wine. It’s clearly a novelty and I don’t begrudge the winery for not filling their best wine full of garlic.

Other booths housed art and craft vendors, prominently displaying those that were garlic themed.

But it was the sprawling “Gourmet Alley” tents selling garlic-heavy cooked foods that were the star of the event. These included peppersteak sandwiches, Italian sausage and thick, buttery garlic bread. Behind the tent, a crowd had gathered to watch the cooks prepare these meals. Blaring rock music narrated their spectacular performance. I learned later that these guys were (appropriately) known as the “Pyro Chefs” 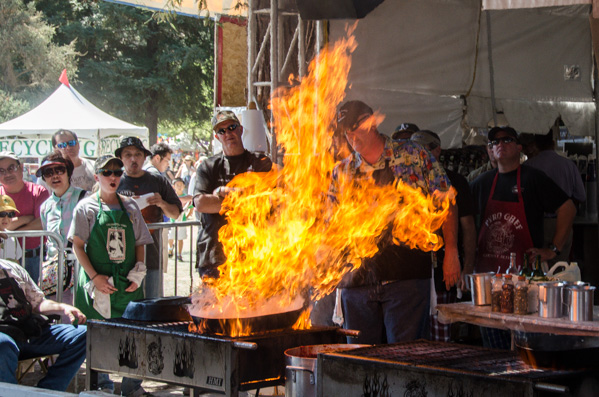 Despite this performance, the thing I was most eager to try was the garlic ice cream. I’d long heard about this interesting offering and I was eager to try it for myself. At a booth that was giving free samples of their garlic vanilla ice cream. I had expected it to be more savory, but it was actually surprisingly sweet and rich with vanilla. The garlic was noticeable on first taste, but it was subtle and fleeting. I actually kind of enjoyed the unique blend of flavors. 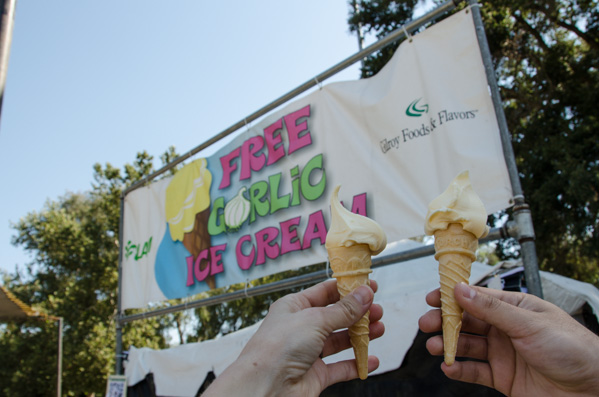 When I noticed that another booth was selling various other flavors of garlic ice cream, I had to check it out. Upon recommendation from the vendor, I went with two scoops of Garlic Almond ice cream served on a half of a hollowed out cantaloupe. It was only 50 cents more than a cone and I figured the crisp fruit would help me rinse down the garlic.

At a festival like this, it’s easy to over-do it. To stuff yourself full of fatty and fried foods to the point that you feel ill. But, I didn’t feel that way after the Garlic Festival. I chalked it up to our measured approach to the festival.  Taking regular breaks to talk and shop between dishes, eating slowly, and leaving before we were overly full. I even scraped off some of the mounds of garlic piled onto my onion rings. I was really proud of myself and went home excited about the flavorful and interesting things that I had tried.

But I was wrong.

In a bout of heartburn and discomfort in the middle of the night, I was reminded that there is, in fact, such a thing as too much garlic. When will I learn?