We were only about 30 minutes drive from our home in San Jose, California, but I felt a long way away. We were headed to the Livermore Valley Wine Country for their annual Barrel Tasting Weekend. Each spring, participating wine makers show off their newest wines, straight from the barrel before blending, bottling and aging. It’s an opportunity for local wine lovers to get an early taste of what the producer had been able to do with the previous year’s harvest. 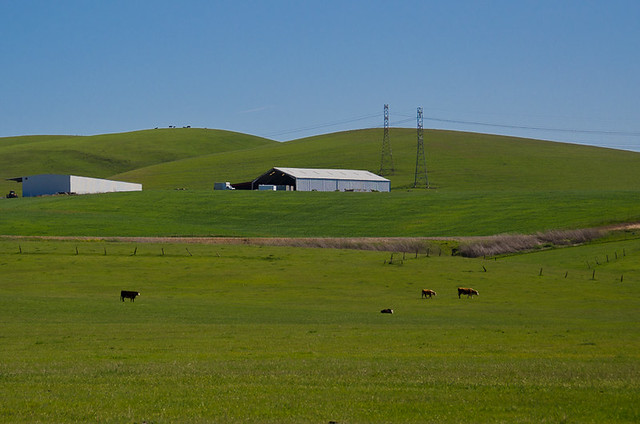 I’d never heard of the Livermore Valley wine country before this past February when I met a woman from the local visitor’s bureau who encouraged us to visit. It is so close to our home, close to Kevin’s parents’  houses, and close to the end of the BART rail line; This lesser known wine region intrigued me, it was possibly even accessible by public transportation from Oakland and San Francisco!

New wine regions are popping up all over the world, so I figured the area was brand new.  As it turns out, the Livermore Valley has produced wine for a long time. Spanish Missionaries planted the first grapes in the area way back in the 1760’s, and the Livermore Valley wine won the US’s first international gold medal for wine in 1889 at the Paris Exhibition. The Livermore Valley was the first region to grow the popular Chardonnay varietal, and today more than 80% of Chardonnay grapes in California trace their roots to a Livermore vine. With this long history, I trusted they knew a thing or two about what they were doing. 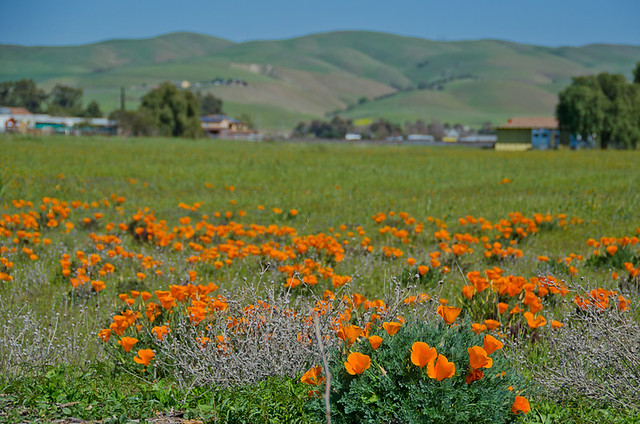 We’d spent the day before away from our dog, Posey, so we decided to bring her along. The only research I did before leaving was to Google “dog-friendly wineries in the Livermore Valley” and took a few notes.  We wound up not really using it, as we asked for recommendations along the way.

We started off the day at Bent Creek Winery where we got our passes and tasting glasses. It was a great place to start because they were doing a blending demonstration. The winemaker first measured a small amount of Cabernet Sauvignon made in a neutral, 2-3 year old barrel that had lost much of its oak flavor, then a Cabernet Sauvignon made in a brand new barrel having very strong oak flavor.  Finally, he mixed them together. We saw how much of a difference there was in flavor and how blending improved them.  The art and science of wine making came together in a way for me that I could easily taste. 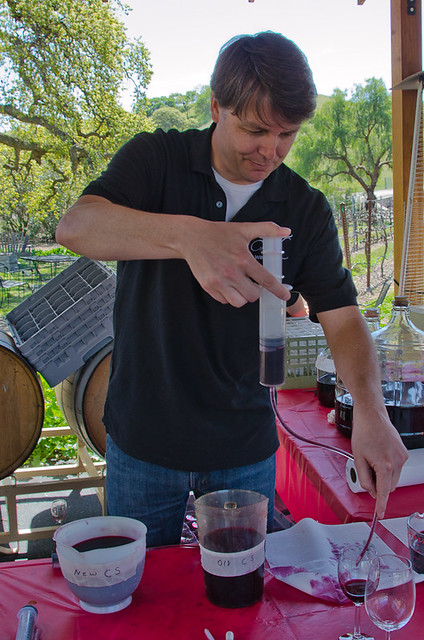 I moved on to their small tasting room where I tried some of their bottled wines. My favorites were their port wines, especially paired with chocolate and candied walnuts per their recommendations.

After Posey lunged at and nearly knocked over the table holding a giant cheese plate (obviously an accident!), we decided to check out the grounds. Bent Creek had some nice outdoor seating areas. We found a shady spot under a tree, with Adirondack chairs and a view of a vineyard. It was a pretty relaxing place and I had to drag myself away. 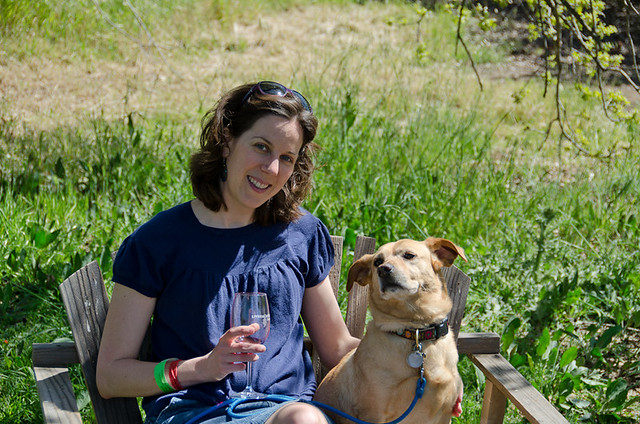 Our second stop was down the street to the Wood Family Vineyards. The tasting room staff at Bent Creek had recommended it, telling us that it’s a very small family producer that was only open for special events and, occasionally, by appointment.

We tasted a few of their bottled wines and their barreled wines. In this tasting, they measured into the glass nearly equal parts Cabernet Sauvignon from two different vineyards, and a tiny amount of Petite Sirah. While I could see room for them to mellow, they were already very good. 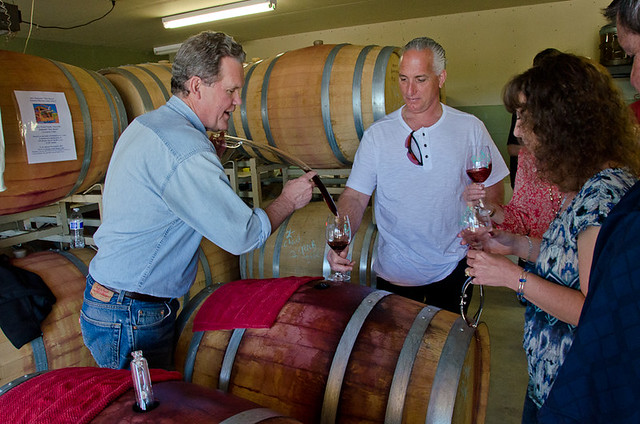 Wood Family had a barbecue vendor, Bart’s Blazin’ Q, on site for the event which was giving out samples of meatballs with barbecue sauce, which Kevin loved.  For the event, several wineries had noted they would hosting food trucks and vendors selling food, but I was disappointed the barbecue place was not selling portions. I’m vegetarian so it wouldn’t have done me any good, but I was getting hungry and I just wanted food to be available — out of principle. 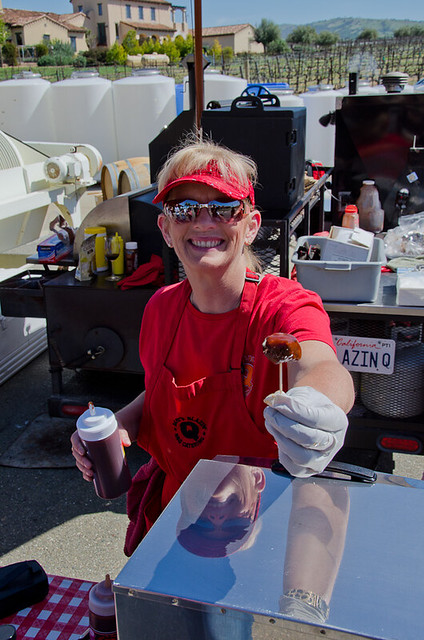 On recommendation of Wood Family, we next went to McGrail Vineyards. I tasted from two different barrels,  but as I said, I was hungry, so we didn’t stay long.

For some reason, instead of going to find food, we next headed to El Sol Winery. It was right down the street and on my list of  dog-friendly wineries. I was happy to find that they had a tray of cookies, cheese, and a crock pot with homemade chili. It was enough to sustain me so that I could enjoy one more tasting before needing to find dinner. As a bonus, they had a chocolate truffle vendor there, and after one taste of his chocolates, we shelled out the $25 for a sampler. I make decisions like that when I’m hungry. 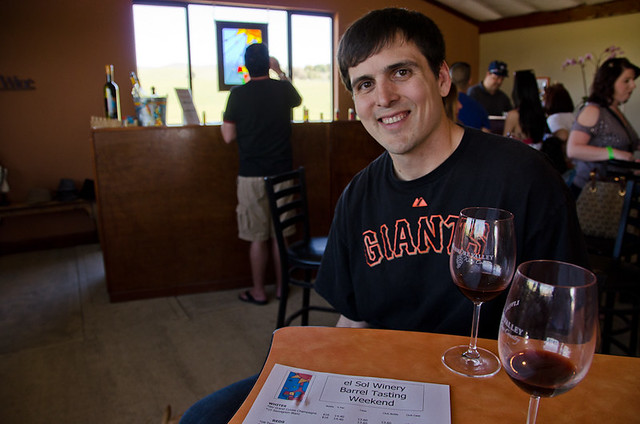 Afterward, we went inside the tasting room to sample a few other wines, including our first white and sparkling wines of the day. I bought a bottle of the sparkling wine and a colorful scarf that caught my eye near the table where we were sitting. They also had a guitar player that I really enjoyed. 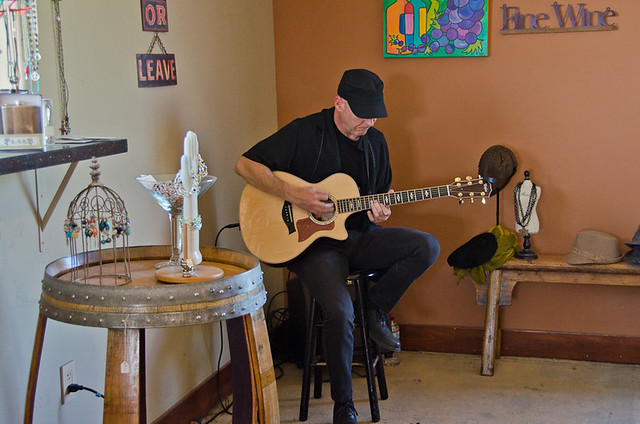 It was approaching Posey’s dinner time and I can only imagine she was still dreaming about the cheese plate she had nearly devoured at Bent Creek. Here, she told me she would forgive me if I gave her a cracker. 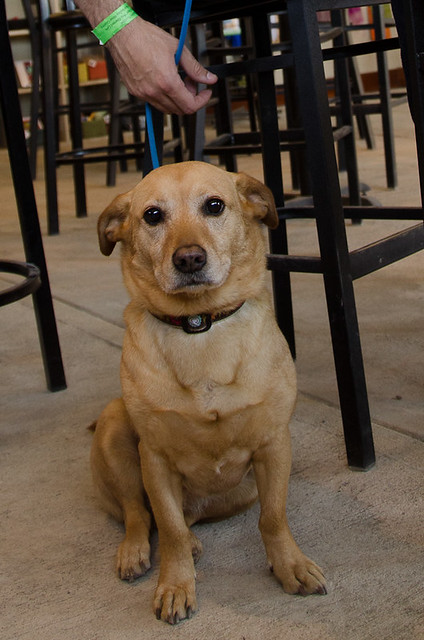 Our last stop was Longevity Wines. They were on the dog-friendly list, but we chose them mostly because I read they were hosting a pizza vendor.  Ken’s Wood Fired Pizza had a mobile, stone pizza oven they had parked on the patio and were making fresh-baked pizzas while we waited, giving me time to taste my last few wines. 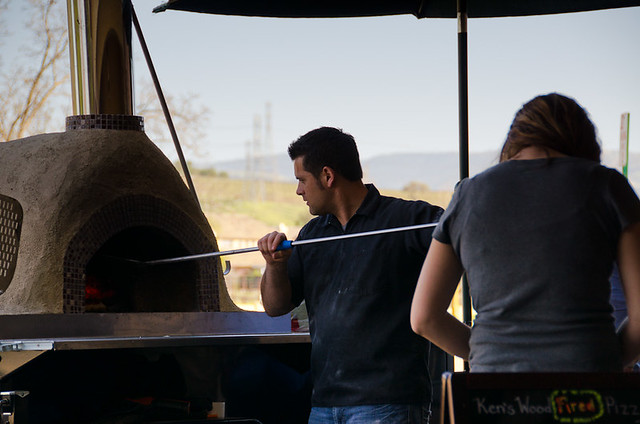 The pizza was great, the crust was perfect. 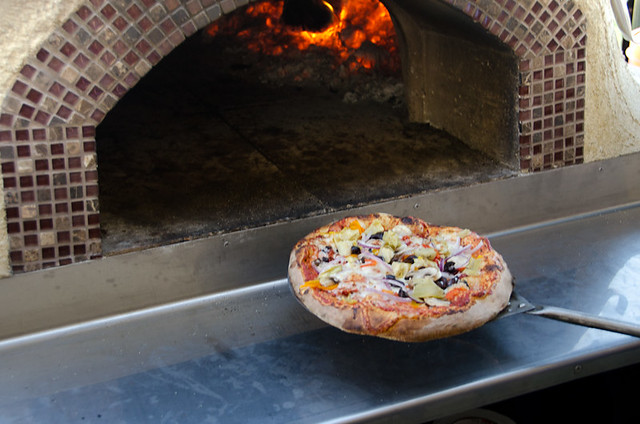 It was a great day and I’m really excited by the quality of the wines we found in the Livermore Valley, the scenic landscapes, and easily accessible location. I look forward to future visits, perhaps even bringing friends and family there the next time they suggest we visit one of the more well-known Northern California wine regions. I’m sure they, too, will be pleasantly surprised.

Thanks to the Livermore Valley Winegrowers Association for inviting me to Barrel Tasting Weekend and giving us two tickets. Opinions and preoccupation with the presence or absence of food are, of course, my own.