You are here: Home / Destinations / France / Living History And A Chance To See The Future
Share4
Tweet2
Pin2
8 Shares 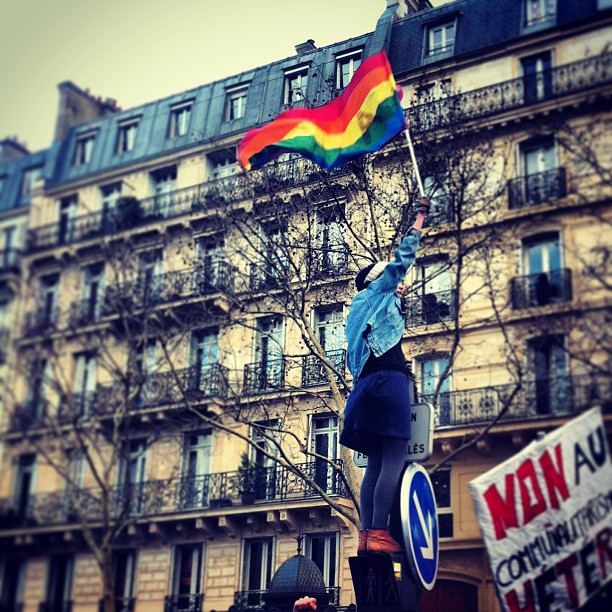 On April 23, 2013, France’s national assembly approved legislation to legalize gay marriage in the country, making it the thirteenth country in the world to do so. Cassie and I were staying in Paris at the time, but ironically, we first heard about this from a post on Facebook post by our friend, Melissa, in California. To most Parisians, the legalization of gay marriage seemed to be a non-event, having no discernible effect on their lives.

Travel gives us the opportunity to experience the news of the day and see history as it is made.   We can see, firsthand, people participating in the struggles that matter to them.  You get a personal connection with the issues in the region.   You can think what you see and make your own judgments.  Are any travelers who have recently visited Egypt to see the Great Pyramids not paying attention to the ongoing events in nearby Tahrir Square?  Not likely.

These opportunities give us a chance to see the results of social change in action.  What happens when you legalize gay marriage?  Judging from what has happened in France, the answer was pretty much nothing, aside from some silly protests at the French Open tennis finals and at the upcoming Tour de France.  (It should also be mentioned that this has given fascists in France one more thing to raise their arms about.  But as the old saying goes, if fascists say something is wrong, I don’t wanna be right.)

So earlier this week, when the U.S. Supreme Court struck down the Defense of Marriage Act (DOMA) and California’s Proposition 8, I knew that this was a big win for human rights and dignity. In the short term, it is also a joyous time for all the couples that have gotten married at San Francisco City Hall this weekend and a perfectly timed SF Pride festival with so much to celebrate. Getting the chance to see this issue (and others) from multiple perspectives is one of the things I like most about travel.

Just a note: Though this blog often covers such hard-hitting topics as tips for finding the best macaron in Paris, in the coming months we are planning to cover a lot more about the real issues we’ve encountered in our travels. So stay tuned!