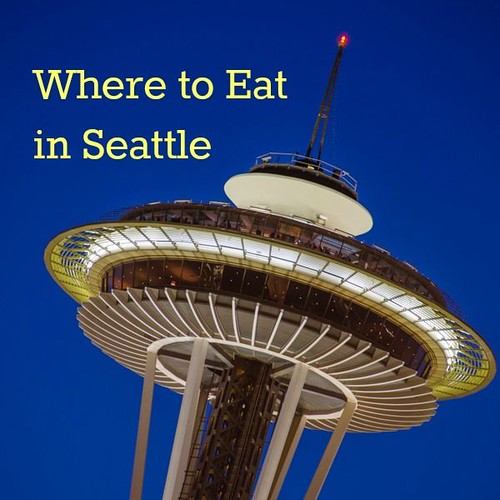 Generally, I travel because I’m curious and I want to learn about a community’s history, economy, society and culture, or to explore the natural environment.

On our recent trip to Seattle, I did none of those things. 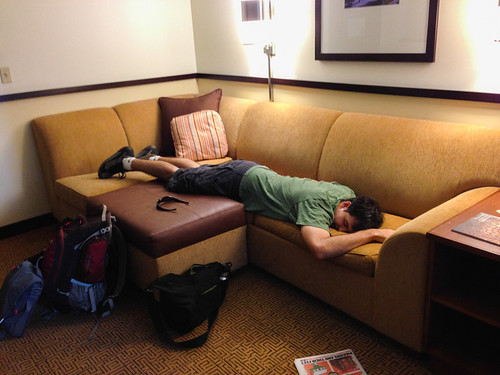 The trip was scheduled for just after an important meeting for which Kevin and his colleagues had worked 16-20 hour days, 7 days a week. As it was his first weekend off in a few months, he desperately needed time to sleep and to relax. I also had been occupied the previous week and hadn’t thought much about the trip. In fact, this was the extent of my planning:

Getting excited about my trip to #Seattle this wknd. I have less than 48 hrs there. What should I see/do/eat? @VisitSeattle

From that, Spencer recommended some neighborhoods to explore, Jason recommended some restaurants, and the Seattle tourist board put me in touch with a craft beer blogger who shared some local breweries and beer bars.

Armed with this information, and some research I did on my phone in the airport and via a local newsweekly, we carried out a successfully low-key exploration of three Seattle neighborhoods (Downtown, Capitol Hill, and Fremont) through food and drink. We were staying at a hotel downtown (near the Space Needle) so we were able to walk to all the downtown locations and also to Capitol Hill, though we took a bus back. Fremont is a 15-20 minute bus ride from downtown.

Though we didn’t visit any museums, talk to many locals, or learn anything really of significance about the place, we did find some great places to eat in Seattle. Here they are by neighborhood: 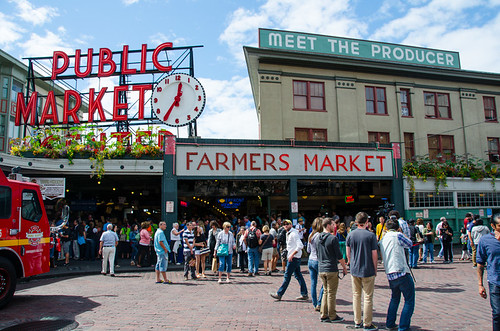 No trip to Seattle is complete without a walk through this gargantuan public market which houses vendors selling fresh produce, meats, fishes, flowers, speciality food products, artisan crafts, and all the tourist junk you can imagine. As we were there on a Saturday, the main market was crowded and somewhat claustrophobic, so we didn’t stay there very long. 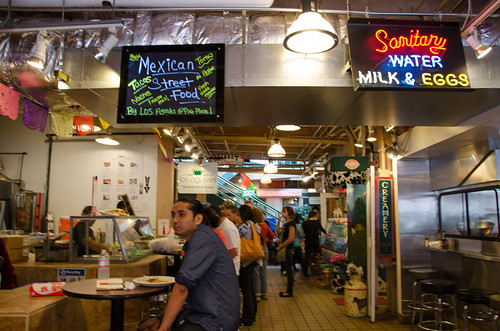 It was very hard to tell where the market ended and the local businesses began, the blocks next to the market are meandering alleys filled with a vast diversity of food stalls, food shops and restaurants, so I wasn’t always sure whether some of the businesses we visited were technically part of the market. But it was fun to explore the alleys and see the various things the vendors were selling. 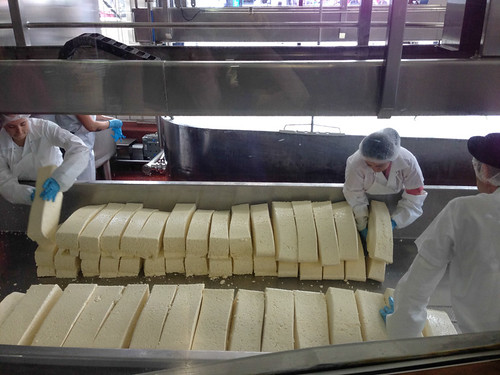 This working cheese factory and cheese shop is right across the street from one of the main entrances to Pike Place market. Through the enormous glass windows on the street as well as in the public cheese shop, you can watch the staff crafting the cheese. The staff were quick and skilled throwing the floppy blocks of cheese around without breaking them. 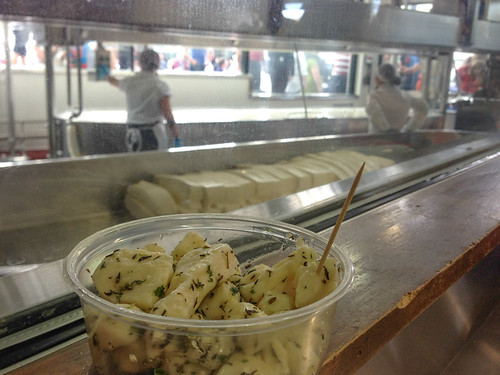 You can sample a handful of cheeses from within the store. The herb cheese curds were my favorite so we bought a small tub.

(Not really) the first Starbucks 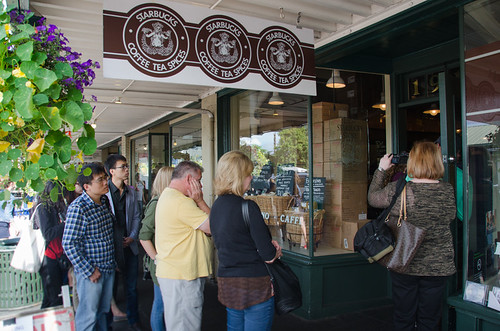 A few doors up from Beecher’s is what is commonly thought of as the very first Starbucks coffee shop. According to Wikipedia, it’s one of the longest continually operating cafes, but not the original location at 2000 Western Avenue, a block north. Still, probably 50 people waited in line to get a coffee or commemorative merchandise there. We took a picture and moved on. 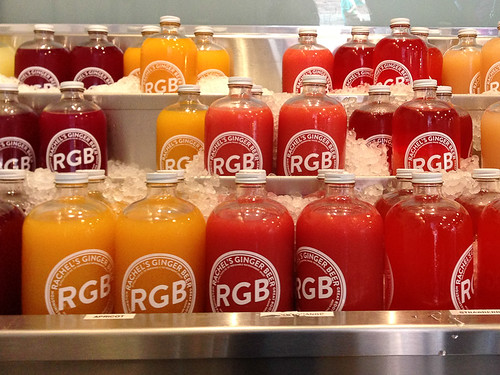 In the mass of shops adjacent to Pike Place market, this brightly colored display of flavored ginger beers piqued our curiosity. We sampled a few, and while they weren’t overly gingery or spicy, they had good fruit flavors. You can get the various flavors poured on tap and blended into an ice cream float (which is what we did) or even spiked as a cocktail. 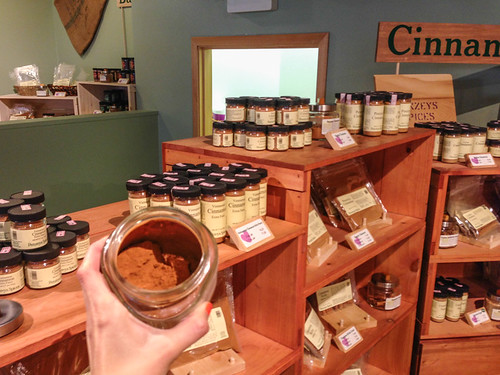 Though not native to Seattle, this specialty chain spice store is a really fun place to browse. Every single spice in their vast collection is available to smell and if you’ve never compared cinnamon from various countries of origin and the many, MANY varieties of paprika, it’s worth a stop in to smell the difference. 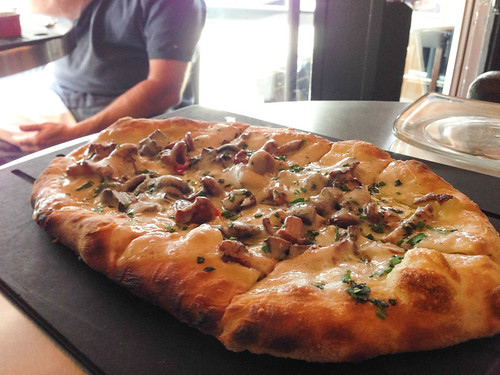 True to name, this pizzeria takes pizza seriously! This restaurant was my top find in Seattle. Not only was the golden chanterelle and truffle cheese pizza that we ordered amazing, they also serve some exceptional homemade sodas. We tried both flavors they had, blueberry and the wild cherry shrub. A “shrub” is a slightly fermented, fruit and vinegar syrup that results in a tart berry flavor. I’m trying to make a peach shrub at home right now. 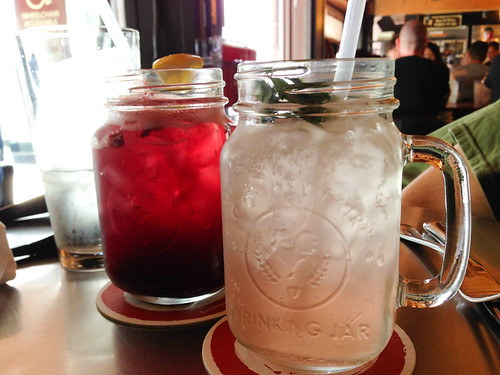 For dessert we had their Triple Coconut Cream Pie from neighboring Dahlia Bakery. It was smooth, rich, and just perfect. 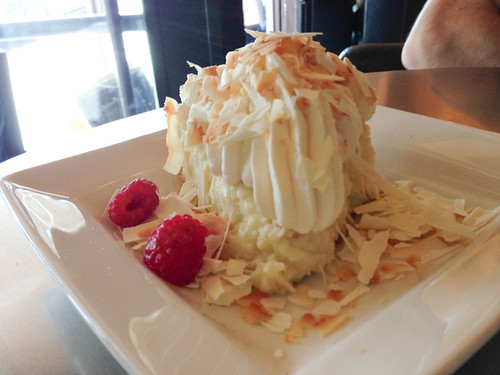 Only after eating here did I find out that both Serious Pie and Dahlia Bakery were  part of the restaurateur, Tom Douglas’, Seattle conglomerate that my friend Jason had recommended. 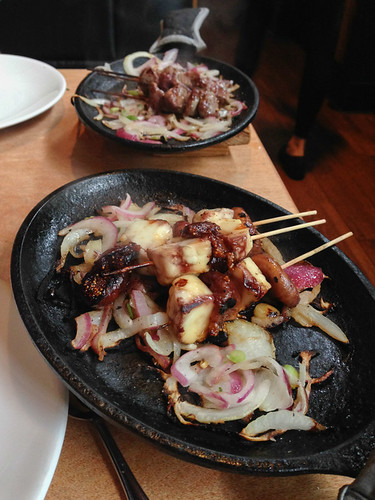 This mediterranean restaurant across the street from Dahlia Bakery is also part of the Tom Douglas group. We ate here on our last night and really enjoyed the appetizers and kebabs. Kevin tried the lamb kebabs and I had the Haloumi cheese, kalamata fig, and balsamic kebabs. The chocolate pie we had for dessert was good, but not as rich and flavorful as the Dahlia coconut cream pie. 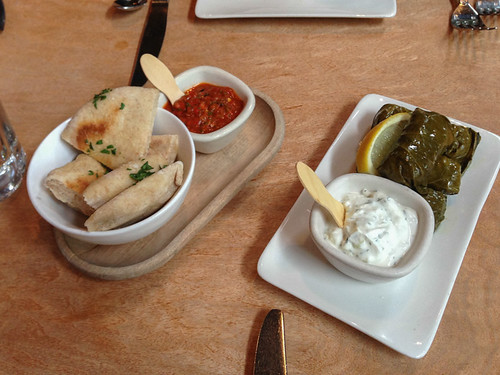 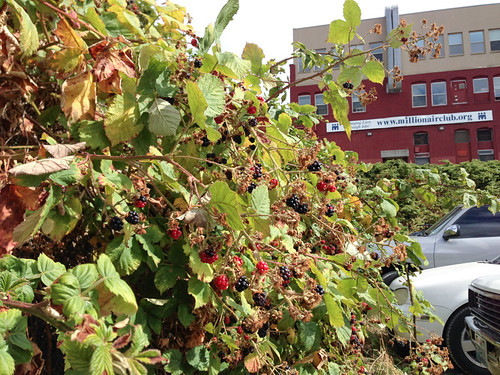 If you are in Seattle in the summer or early fall, there is a massive ripe blackberry bush in the parking lot between the Bellwood Cottage Park and the intersection of Elliott and Wall Street [map]. I got myself ensnared as I gorged myself on these fat, ripe berries. I was scratched up and my feet and arms were dripping with my own red blood and the purple, berry juice. It was wonderful and totally worth the price I paid!

Continue to Part II: Where to eat in Seattle’s Capitol Hill and Fremont neighborhoods…