This is a continuation of our last article about places to eat in Downtown Seattle.

Here are some great places we found to eat (and drink!) in the Seattle neighborhoods of Capitol Hill and Fremont: 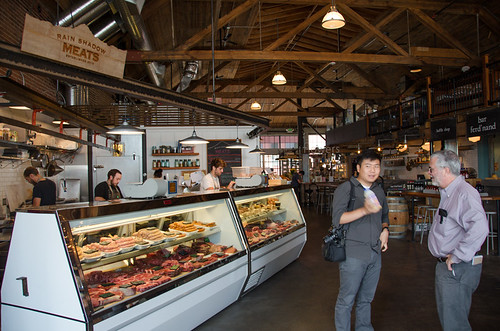 Pike Place Market isn’t the only foodie market in Seattle. Melrose Market takes up most of the block on Melrose Avenue between Pike and Pine. This market houses about a dozen restaurants and specialty food shops.  The businesses focus on sustainable and local products and it’s a great place to grab a quick, healthy bite to eat, a local bottle of wine, or a food-related book or souvenir.

The Calf and Kid 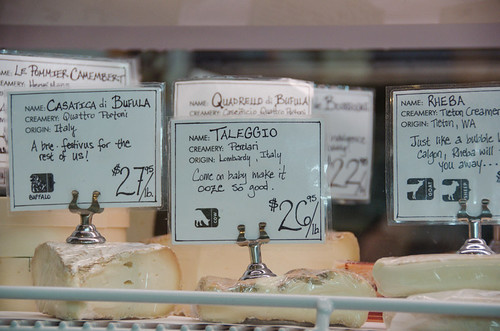 The Calf and Kid is an artisan cheese shop (inside Melrose market) that sells specialty cheeses from around the world and won me over with their quirky labels. 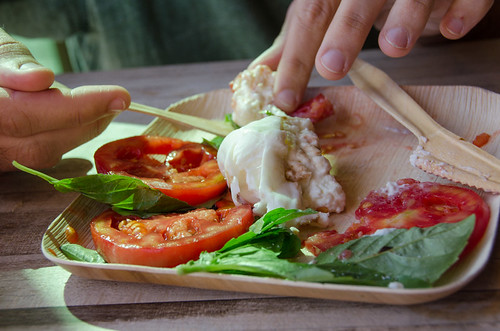 The day we were there, the shop had a stand set up to sell burrata caprese salad. I had just recently learned about burrata cheese (a fresh mozzarella ball stuffed with fresh cream) and I’d been eager to try it. Though the texture of this bag-shaped ball of cheese from a local Washington State cheesemaker might turn off a few people, it didn’t disappoint in taste, and was perfect in a simple dish like this. 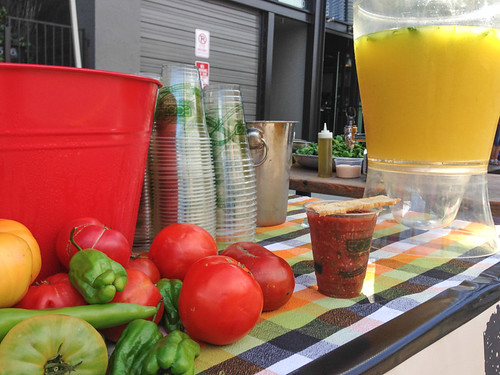 Just next door to the Melrose Market is Terra Plata, a restaurant that focuses on seasonal and local fare, or as they call it “earth to plate”. When we were there they had a stand set up selling their fresh and perfectly chunky summer gazpacho. They have a really nice rooftop deck that is open during the warm months.

Aside: I’m not exactly sure whether these guys were from Terra Plata or another restaurant in the Melrose Market area, but they sold me a very tasty huckleberry soda. And doesn’t the guy on the left look just like Seth Rogen? 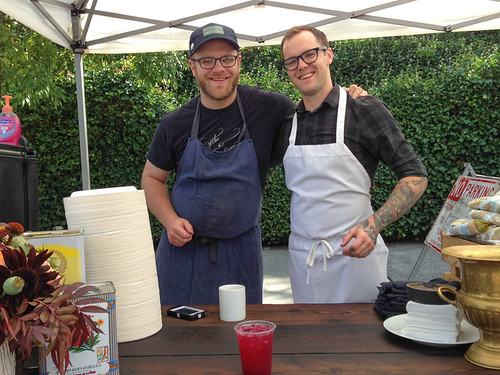 I’ve had lots of really terrible Mexican food in my travels, so a decade ago I swore off eating tacos anywhere except California or Mexico. 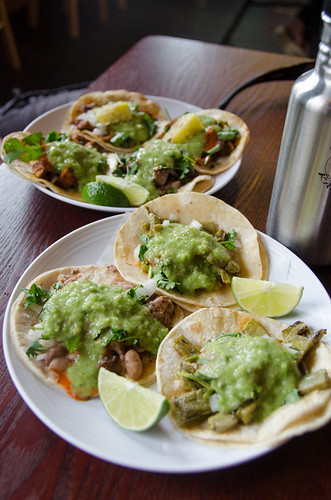 In recent years, I’ve come to realize that with changing demographics in the US and the resurgence of attention given to quality food, you can find good ethnic food in unexpected places. So we decided to give Tacos Chukis a try. I had their vegetarian tacos and Kevin their pastor served with grilled pineapple. Both were spicy and flavorful and held their own against anything I’ve had in California. I’m sold… 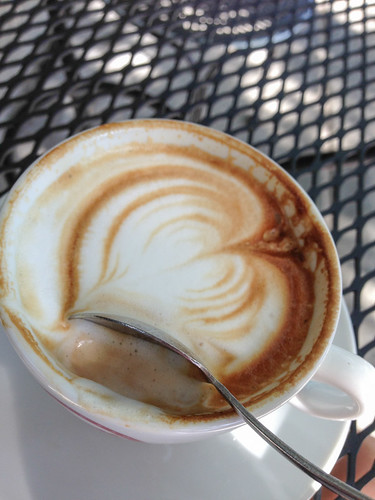 In the home of Starbucks, I made a special effort to find some up and coming local coffee places as an alternative to the global chain. Espresso Vivace, an Italian-style espresso place, was my favorite. My cappuccino had the thickest and most velvety smooth foam I’ve ever had. Kevin had a spiced, hot apple cider that was a tasty and unique option for a non-coffee drinker accustomed to ordering hot cocoa or hot tea. 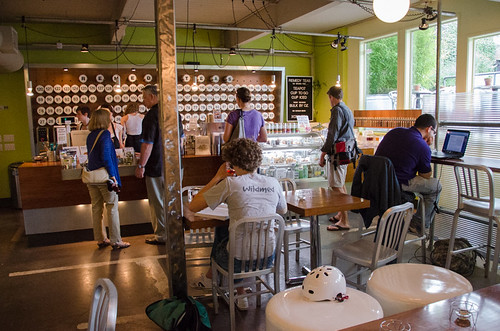 Knowing how much we love tea, Kevin’s colleagues who used to live in Seattle recommended Remedy Teas as soon as they found out that we would be visiting the city. This sleek, modern tea house offers more than 150 varieties of organic tea ranging from single-origin green, white, black, and oolong teas, to custom-blended herbal and wellness teas. 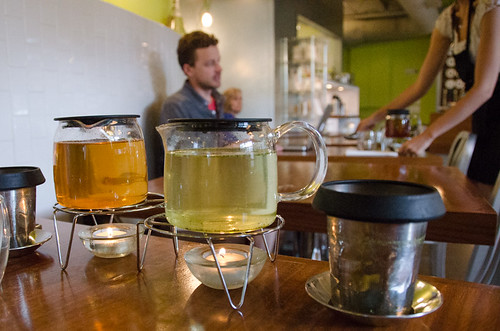 They use fine, stainless steel tea cup  filters which is my preferred method of infusing tea as it allows ideal space for tea leaf expansion and easy resteeping — which can and should be done 3 or 4 times when you are using high quality tea leaves. Remedy even serves the tea with a tealight burner to keep it warm.

The Sixgill is named after the local bluenose sixgill shark, a large predatory shark that lives in the Puget Sound and can be spotted regularly along Seattle’s waterfront. While learning about this native shark made me somewhat guilty we were at a bar rather than at the Seattle Aquarium or outside learning about the natural environment, the guilt didn’t last long when I realized how great the beer selection was. 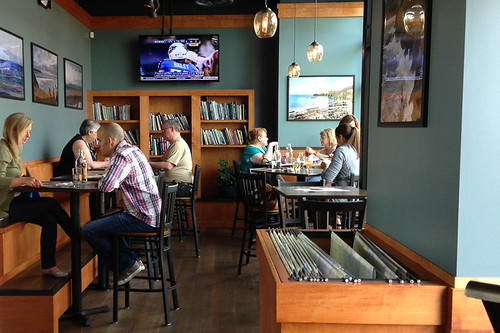 The day we were there, they were hosting a fruit beer and cider festival.  We were originally skeptical (Kevin and I both dislike gimmicky beer blends), but their lineup won us over with it’s diverse selection of lambics, sour and wild ales, craft ciders, and dry, fruity blends that showed a new side of fruit beer. 10 Barrel Brewing Company‘s Apricot Sour was perfectly tart with a balanced fruity flavor and is one of my favorite beers ever. 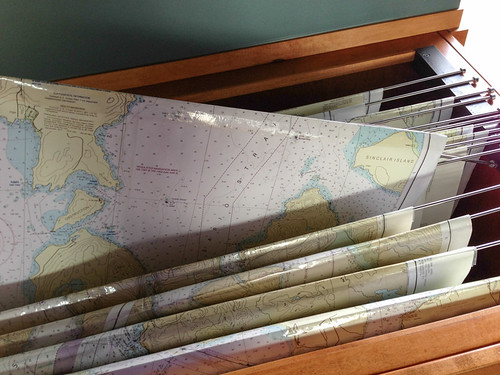 Along the aquatic and ocean theme, the pub has a stand displaying local nautical maps of the Pacific Northwest. It was interesting to look through them and see exactly how many miles of coastline this area has. 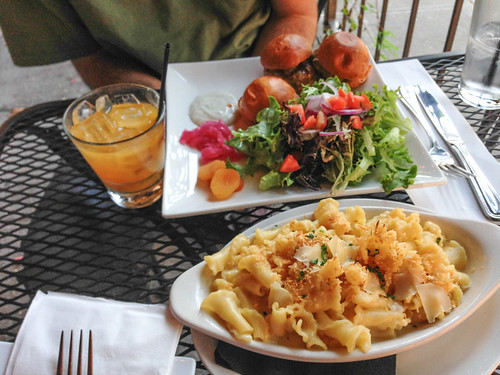 This restaurant wins the prize for most unusual name of a restaurant ever! This gastropub’s menu was pretty solid comfort food — Kevin ate their lamb sliders and I tried their white truffle mac and cheese. They had good mixed drinks and a solid local craft beer selection.

Nine Million in Unmarked Bills on:

Ice Cream from “Bluebird Ice Cream” and Pie from “Pie” 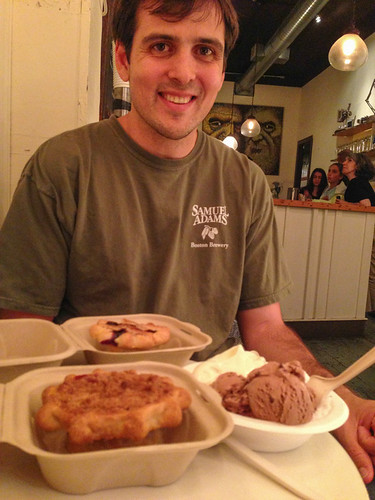 There’s nothing I wish I had in my neighborhood more than a place that sells good fruit pies! That’s why I was really excited to find Pie, a bakery specializing in both sweet and savory pies. The pies are sold in single serving sizes, perfect for taking out for a picnic or carrying home or to your hotel. As the bakery was right next door to an artisan ice cream shop, Bluebird Ice Cream, we decided to take there and order the “a la mode.”

Where are your favorite places to eat in Seattle?