I fumbled with the key, turning it over and over again in the lock. It felt like it had released but the door still would not budge. Getting frustrated, I passed the keys to Kevin and asked him to give it a try. It was after one o’clock in the morning and I assumed I was just too tired to figure it out.

We were outside of the brownstone apartment in Brooklyn we had rented on the vacation rental site, Airbnb. My sister and her husband had come out from Pennsylvania and the four of us had just gotten home from having dinner at a late night pizzeria.

Kevin gave it a try, turning each key one by one in both of the locks. After a few minutes he declared, “the deadbolt is unlocked, it’s the door knob that is locked.”

That was when I remembered the conversation I’d had with our Airbnb host that morning when she gave me the keys. “Only the deadbolt will be locked,” she said. We lock the knob lock at home and I realized we must have accidentally done the same when we had left for dinner. 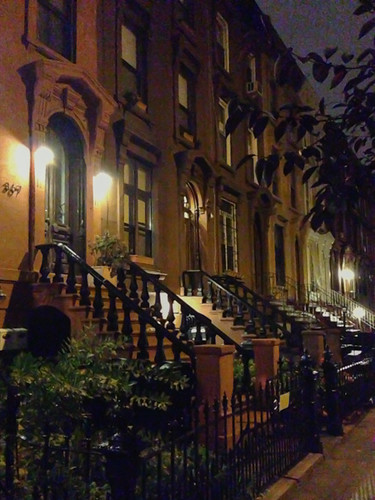 The lovely apartment we rented on Airbnb was a little less lovely when we got locked out in the middle of the night.

I replayed the conversation in my head. The host had said that when we arrived, only the deadbolt would be locked. She hadn’t said, “don’t lock the doorknob lock”. That’s an important distinction. But it didn’t matter now, we were locked out.

The host has an apartment adjacent to ours and behind the locked door, so Kevin tried knocking, gently at first and then louder. I pulled out my phone and dialed her number. No answer.

I got locked out of an Airbnb apartment in Paris earlier this year. I had to call the emergency contact we were given when the key hadn’t worked in the finicky, old lock. Luckily, she answered our call right away and was on her way to bring me a spare key when I finally managed to get it open. This time we weren’t so lucky.

In desperation, we called our friend, C., who was also in town from California. He and his wife had rented another Airbnb apartment just two blocks away. I hated the idea of waking them up and crashing at his place (I knew his host would be horrified if she found us there!), but we didn’t know what to do. Groggy and half asleep, he told us to come over.

The four of us sprawled out on the kitchen floor of the tiny apartment. My fear was realized when his host woke up in the middle of the night and came into the kitchen nearly tripping over my brother-in-law. She angrily exclaimed, “why are you sleeping on the floor!” I jumped up to explain that we were friends of theirs and that we had been locked out of our own Airbnb apartment. She softened and apologized, and brought us some pillows from the couch and some sheets to cover up with. 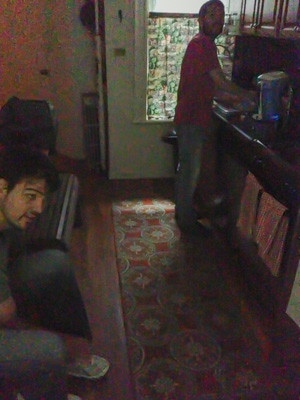 The small kitchen floor we slept on.

We finally got in touch with our host at about 7:30 that morning, after I’d called Airbnb’s customer support to ask for their help. Our host admitted she hadn’t clearly communicated that we weren’t supposed to lock the knob lock and that she hadn’t heard our calls come in, and she refunded our money for the night. Still, it didn’t make up for the anxiety and the trip-killing night with no sleep.

It was stressful experience, but it hasn’t turned us off of using apartment rental sites. Renting an apartment in a real residential neighborhood is a great way to experience a community as local residents do, but there are some lessons we’ve learned for next time.

Here are some ways to keep yourself safe when staying in a rental by owner sites like Airbnb, VRBO, Couchsurfing, or housesitting arrangements. Some were my thoughts from our experiences, others were suggested by EIT readers on our Facebook page:

1. Ask for two emergency contacts who have keys to the house.

Even if the host is in town, as in our case, you need to have a backup person to call if they are not able to answer their phone.

3. Have a backup place to stay

Emily told me the story of how her brother had booked an apartment on Airbnb and the host cancelled the reservation just a few days before he arrived. Because it was a busy holiday weekend, he had trouble finding a place to stay at this last minute. She suggested one way of protecting yourself in this situation–reserving a room at a local hotel that allows 24 hour cancellations, so that you have a backup place to stay if this happens to you. And if you cancel in advance and have a problem at the last minute, at least you will know of a local hotel to call that may have a vacancy for you.

4. Only stay at places with several, detailed reviews

Mara told us that though she is often tempted by new apartment listings with stunning photos but no reviews, she  always passes them up for listings that have proven themselves with multiple positive reviews. I do the same thing as I feel it’s a way of reducing the risk by going with a proven site.

EIT reader, Anna cautioned that user-listed reviews can be faked by dishonest landlords. For this reason, I tend to look for listings with lots of longer and more detailed reviews that are harder to falsify. If all of the reviews are pretty generic (e.g. “great place, nice host!”), you probably want to look elsewhere.

5. Read the profile of the host, and try to learn more about them on social media

As we suggested in our article about choosing a housesitter, don’t feel bad about researching the host and even asking to contact references. Some hosts will offer links to their social media profiles, their websites, outline where they work, and other information that helps to show they are a real, verifiable person. Do your due diligence to whatever extent makes you feel comfortable.

6. Request photos of every room (if not provided)

A couple who housesat for us recently told us a pretty shocking story. Just prior to coming to stay at our place, they had shown up at a house where they had agreed to housesit. Though the homeowner didn’t include any photos of the house in their listing, the description looked good, and the homeowner was very nice when they spoke on the phone so the housesitter agreed to the arrangement, sight unseen. When they showed up at the house they found the place to be filthy — a full-fledged hoarder situation. Though she felt guilty leaving them at the last-minute, she said that it didn’t feel comfortable staying there and declined the assignment.

I always look for listings that have clear photos of every livable room in the unit. If there is one missing (bathroom, kitchen, etc) email the host and ask for one before booking so that you know what to expect. If the condition of the unit is vastly different from the photos on arrival, then you have every right to back out if you don’t feel comfortable.

I still use Airbnb all the time–in fact, I’m using it next week when we head to Tokyo! I find it way to get to know local people and neighborhoods when I travel, but you do have to be smart and prepared to avoid problems like this! I’ve learned my lesson…

What are your tips for protecting yourself when using AirBnb or vacation rental services?

Share6
Tweet15
Pin104
125 Shares
« A Lazy Eater’s Guide to Seattle, Part II: Capitol Hill and Fremont
The Most Hipster Thing You Can Say »