Today’s post is by EIT reader, Mark Heasley. Mark is originally from Michigan. After college, he moved to Taiwan, where he lived and worked as an ESL teacher and ESL writer for five years. He said that he taught this particular kindergarten class for one of those years and “they taught me just as much as I taught them.” He now lives in Brooklyn, writing and editing children’s books. He still has the travel bug and, as I write this, he’s backpacking through Guatemala! Thanks for sharing your story with us, Mark!  — Cassie

It never snowed in the city (ever). Many children believed that snow only existed in books or on TV — like heaven or the Smurfs.

“Does it hurt when snow falls from the sky?” they wanted to know. And: “‘What does snow smell like?” They listened silently to my answers, bobbing their heads in agreement and disagreement at the same time. Debate about the existence of snow spread. One child accused me of telling fibs. A prior incident involving the Easter Bunny brought my credibility into question. This controversy needed to end.

So one day, we left the city. We journeyed to a mountain, with a mountaintop so high that it peaked above the clouds. And there was snow there.

There was snow everywhere.

It was a shocking, frozen miracle. A vast, impenetrable whiteness stretched as far as their eyes could see. Snow was REAL!

Children collapsed all around me, frantically waving their arms and legs, making angels.

Dozens of tiny fists reached for dozens of tiny miracles. And then we had: The. Most. Epic. Snowball fight. EVER! 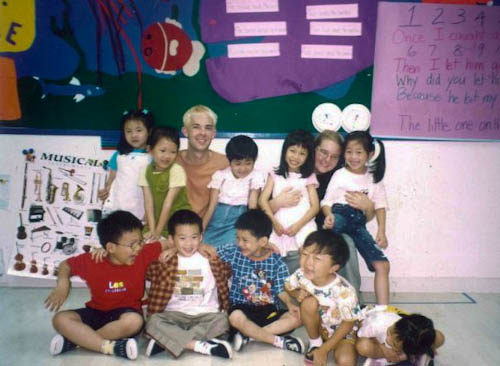 Mark and his little explorers

I know that you have unique travel photos and memories to share! Contact me, if you would like to see your story featured here on Ever In Transit.