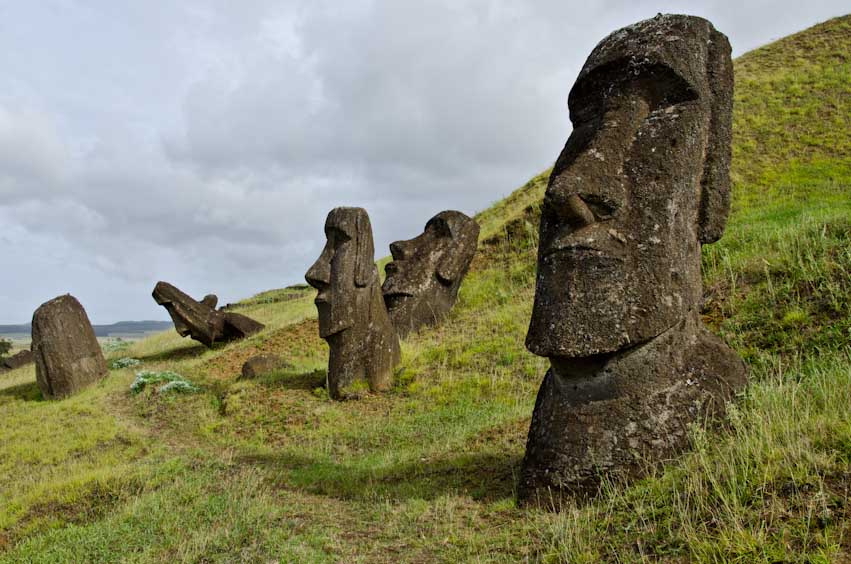 Centrally located Rano Raraku quarry, where almost all of the moai originated

Since Cassie and I visited Easter Island this past March, I’ve thought often about the Moai, the giant stone heads scattered throughout the island. You may have seen the story about the mysteries of Easter Island on the cover of the July 2012 issue of National Geographic. Since the Nat Geo issue came out, I’ve seen countless other media reports on the island, including this one on Yahoo News, and this one on the LA Times.

The articles discuss a new theory that says that rats, not people, were the main cause of the ecological disaster that is Easter Island. The research, by Carl Lipo of Cal State Long Beach and Terry Hunt of the University of Hawaii, is compelling in that it seems plausible that rats could have accelerated the deforestation on the island, as they ate the palm nuts and prevented reseeding of the trees that would be felled by humans for construction of canoes and housing.

Nearly all the moai came from a stone quarry in the center of the island, which is several miles from their final resting spots mostly along the coast sea. The  articles discuss the theory of the moai “walking” to their final resting spots, mostly by the sea. The lore from the native Rapa Nui people says this is how they moved. This video shows how it might have worked:

My issue with this “proof” is that they made this work with a ten foot tall, 5 ton moai. That may sound pretty big, but the moai found on Easter Island are actually quite a lot larger than that. For that reason, I question whether this technique would scale to handle some of the biggest statues, those that exceed 30 feet and weigh over 80 tons. If it took 18 people to handle the 5 ton moai, would it have taken nearly 300 to move an 80 ton version? The competing theory says that the moai were moved on logs, and that this activity contributed to deforestation.

Clearly, more research is needed, and I eagerly await the results. I believe that the more we learn about its history, the more intriguing the island will become. Not only that, I believe the case for conservation will become that much stronger as well.