One of the highlights of TBEX in Toronto this year was getting to meet a group of craft beer-loving travel bloggers that I have talked to on Twitter but had never met in person. Because a few of these guys live in Toronto, we looked to them for advice on the best bars and most exciting breweries in the city.  Because Kevin and I couldn’t go everywhere, I asked each of these friends to recommend one of the best places they found to drink beer in Toronto.

Check out this list of our favorite craft beer bars and breweries in Toronto. (Most of these guys are Canadian, so excuse the  u’s they put in words like “favorite”.)

Tucked away along the trendy hip Ossington strip of Toronto, Ontario lies an old automotive shop converted into one of the world’s hottest craft breweries. Bellwoods Brewery was named the 3rd best New Brewery in the World for 2012 by RateBeer.com and is becoming quite the hit with locals for more than just its fantastic assortments of beers. Keeping some of the automotive luster, the white picket fenced patio is extremely popular amongst locals from around Toronto and will become even more so with the addition of a new awning for nights of stormy weather.

Reading reviews on Yelp, there isn’t a bad beer mentioned amongst locals. While I was there, I sampled everything on tap and never found one bad beer. My personal favourites include the delicious Farmhouse Classic, a smooth summer tasting saison, and the Wizard Wolf pale ale. Two deliciously interesting beers that caught the attention of my taste buds included the Twin Peach pale ale and Hoppy Hefeweizen, an IPA Hefeweizen. For fruity beers, I found the Twin Peach to be the best beer of 2013 thus far in my mind, while the Hoppy Hefeweizen was one of the best mixes of traditional seasonal beers I’ve ever had. I’m not a big IPA fan and I could drink this all night long. 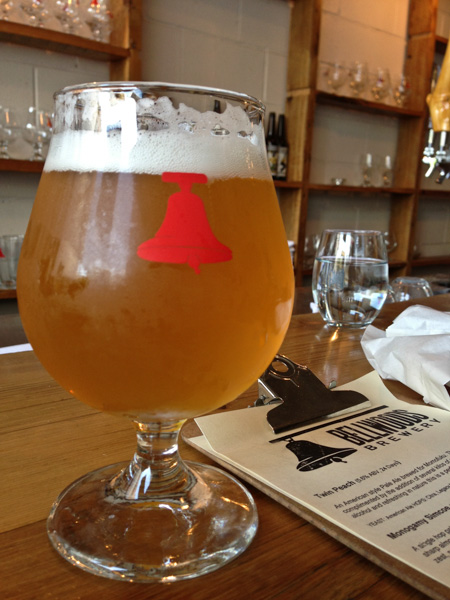 The Farmhouse saison at Bellwoods Brewery

Opened 10 years ago in Toronto’s Distillery District (a National Historic Site), Mill Street quickly became my favourite local brand, putting out Ontario’s first certified organic lager and a handful of other great beers to begin with, and adding numerous seasonals and “one-off” beers. Joel Manning, Mill Street’s brewmaster, travels to Europe regularly to learn about traditional brewing styles and techniques which he then uses to brew Mill Street’s next big thing. I’m all for the traditional styles, but where I think Mill Street excels is in putting a twist on the usual. Two of their most popular beers are the Lemon Tea (a wheat beer with earl grey, orange pekoe teas and a squeeze of real lemon) and the Vanilla Porter (which uses cold-pressed vanilla with more flavour than you’ll find in any supermarket vanilla extract).

Demand was so high for the Lemon Tea beer that Mill Street had a hard time keeping up. It was the fastest-ever selling beer in our government liquor stores and when I found some I resorted to hoarding cans of it in my fridge so I would not be without when I got thirsty. The Vanilla Porter, brewed for winter enjoyment, is a beer that makes beer geeks whine and moan when the year’s batch runs out. Joel Manning actually receives hate mail over it’s scarcity come spring. It’s a beer I look forward to enjoying each year when the days get shorter and the mercury drops below freezing. I understand they will be canning it this year, and I’m making room in my fridge now to start hoarding cans again.

When it came time to develop our “Beer Makes History Better” tour for Toronto Urban Adventures, it was a no-brainer that the tour would end at Mill Street. The unique ambiance of the old Victorian whiskey factory, combined with the quality of the brews make Mill Street one of the highlights of the tour and the brew pub is an excellent place to grab a meal afterwards. We offer this tour Tuesdays – Saturdays at 3pm (until the end of November), and we ask people to book online at least 24 hrs in advance. Many have said our tour is the best thing they did in Toronto and it’s one of the reasons we’re currently ranked the #1 “thing to do” in Toronto on TripAdvisor.com! 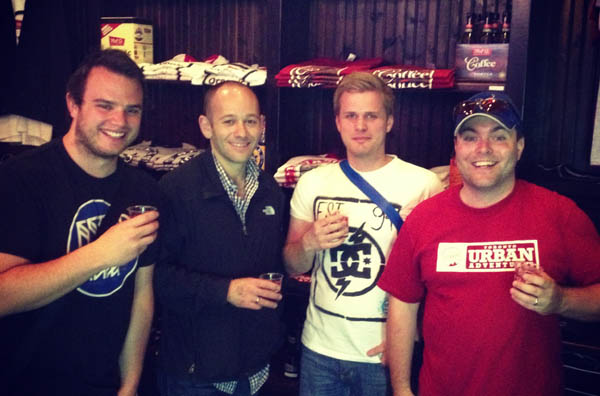 C’est What? That’s exactly what I thought when I saw the beer list.

Erin and I stumbled upon C’est What looking for a quick, casual dinner, and wound up stumbling back in (and out) a few more times before the weekend was done. I was thrilled with their lineup containing a mix of their own brews and other local craft offerings. And since we both have different beer tastes, the range of styles made it easy for us to both find something we liked each time.

When it comes to the best beer and food combinations in Toronto, nobody comes close to Beerbistro. The kobe beef tacos are always a treat, but the Brussels mussels are my mainstay, and their Belgian frites are the best in the city. I’ve never had a bad meal at Beerbistro, nor have I ever had a bad beer. If that isn’t enticing enough, everything on the menu here – even the ice cream – is cooked / made with beer.

The bottled beer selection at Beerbistro, and the level of knowledge of their bartenders and servers, is unparalleled in the city. Their tap list is decently balanced with a mix of locals brews, Canadian beers and imports. While I tend to visit other bars when I am particularly craving some local craft beers, if I want something different or unique – Beerbistro wins. On more than one occasion I’ve had the bar staff here treat me to free samples, including some great Cantillon beer from Belgium. It’s a bit pricier than most places, but also a bit nicer. Usually packed with suits after work during the week, don’t let that intimidate you if you just want some good beers, as it’s always a friendly place. If you want something special, ask for their beer cellar menu – a list of vintage and rare finds, often found nowhere else in Toronto. A night at Beerbistro may put a dent in your wallet, but at least your taste buds will have a good time. 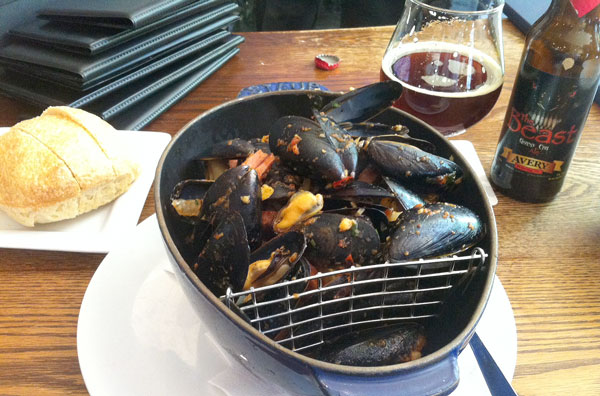 Away from the grasp of the average tourist lies Indie Alehouse, a brewery/restaurant that adds life to the once alcohol-dry Junction neighbourhood. Although this establishment looks a bit upscale, the vibe is relaxed and unpretentious, and it is usually filled with regulars – this shouldn’t surprise anyone given the fact that Torontonians tend to like sticking around to their neighbourhoods.

Since I should be discussing my favourite beer in Toronto, I must mention that this award goes to Farmhouse Saison produced by Bellwoods, but since Jason already wrote about that brewery (see above), I had to go with my second favorite: the Instigator IPA by Indie Alehouse.

I prefer beers that aren’t extra hoppy, hence the Instigator fits right in. It has a lovely bitterness infused perfectly with citrus, and the tropical aroma makes it excellent to drink during Spring and Summer. And since the warm months are mostly when I’m drinking beer, it seems like we are destined to be lovers.

For me, barVolo was by far the best of the six places I visited. Great selection of 30 Canadian craft taps, plus a large bottle selection, including some beers that are hard-to-get in the US, like Cantillon. Add in knowledgeable and passionate owners and friendly staff, you really can’t ask for more. I could have visited there every night. 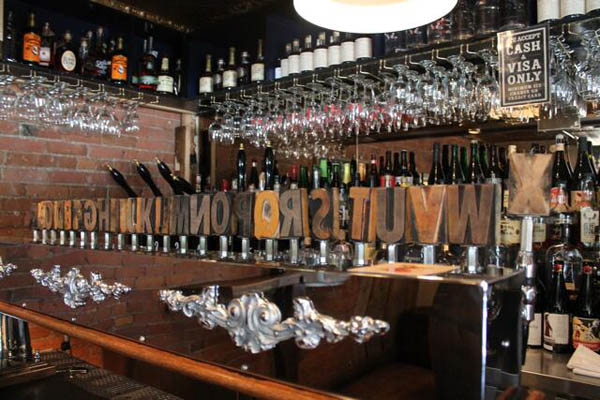 We met our friend Red (see above) at this bar one night. It’s a small, but inviting place centrally located in walking distance to downtown and the convention center. It’s also right at the intersection of two of the major street car lines, King Street and Spadina  (Kevin and I were staying north on the Spadina line, and Red lives off of the King Street line so it was perfect for us both).  More importantly, they had a large selection of beers from Ontario and neighboring Quebec. In total, 36 craft beers on tap, 100+ available by the bottle. While we didn’t try the food, I saw they have some inviting shellfish specials. Mussel Mondays 2lbs of mussels and a basket of frites (french fries) for $9.95 + Buck a Shuck Tuesdays, $1 per shuck on selected oysters.

Find them on Urbanspoon: Bellwoods Brewery:

So, what did we miss? Do you have any tips for where to drink beer in Toronto?

Share26
Tweet27
Pin233
286 Shares
« Finding The Best Macarons in San Francisco
Do You Use Google Reader? Time to Switch »