You are here: Home / Responsible Travel / Why Ecotourism is More Important than Ever
Share28
Tweet29
Pin23
80 Shares

Over the last few years, I’ve traveled to several places with emerging economies. These experiences have taught me a lot about the challenges faced by people trying to get by under difficult circumstances. Two such experiences, though, really stand out in my mind.

While driving a windy mountain road in Guatemala, we zoomed past a man in the middle of the road who was holding out a gorgeous bright, lime green parrot for sale. It was hard for me to decide who to pity more, the man trying to make a living, or the parrot that had clearly just been captured in the forests above.

In Cartagena, Colombia this past fall, we visited a monastery atop a hill that allows incredible views of the city. As we were leaving, a man approached us with the opportunity to take a photo with his friend… a magnificent three-toed sloth. Immediately I was enthralled; the animal was so beautiful! 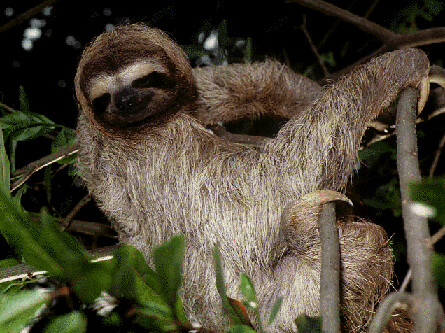 But remembering that bright green parrot, I knew it was safe to assume the sloth had experienced a similar fate, likely being snatched from his rainforest home while peacefully sitting in a tree. By paying the man to be photographed with the sloth, I would be encouraging the act of taking animals from their natural habitat. When I’m traveling and constantly exposed to new situations, it’s easy to make this sort of mistake, even though I have good intentions of traveling responsibly.

In travel, as in life, everything we spend money on provides somebody, somewhere an incentive to give us more of what we buy. We constantly vote with our pocketbooks. What we pay for lives on, and what we don’t dies out. It would be so easy for me to judge those men in Guatemala or Colombia and be appalled at their actions.

But they are just trying to survive, the same as I am. And while their actions have a more immediate and obvious impact on the environment, there is no doubt that my actions do more damage to the planet. I have options to make a living beyond trafficking in wildlife, and the simple fact of the matter is that these men probably do not. If I were in their situation, would I act any differently?

So Why is Ecotourism More Important than Ever? 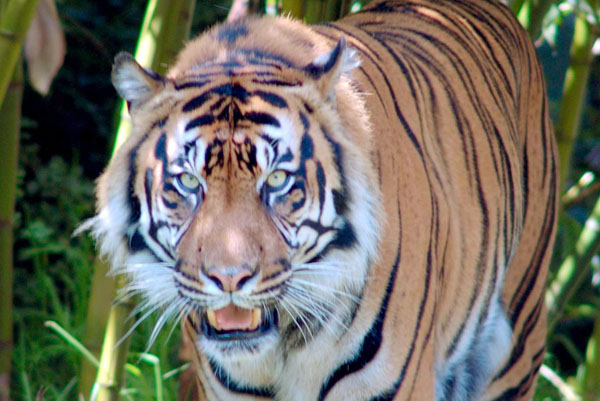 Many of the remaining tigers live in zoos.

Throughout Africa, elephants are being slaughtered at a startling pace. Rhino horns are now more valuable than gold. There are only 42 viable wild tiger populations left on the planet. I could continue this list for thousands of words, but I’m hoping the point is clear. The time for action is now. If we miss this opportunity, the only place to see some of the most amazing life forms our earth has ever seen will be at a zoo.

Ecotourism provides the only sustainable solution to this problem. Surrounding each of these ecosystems is a human population that can be convinced of the fact that an elephant, rhino, tiger, or giant rainforest tree is worth more alive than dead. When you visit these communities and use your tourist dollars to reward conservation, you give the incentive for people to protect those newly valuable resources. You can read about an example of villagers protecting Kenyan wildlife here.

Governments, militaries, and wildlife rangers can improve the situation in some of these environments, but in nearly every case, the natural environment hasn’t been safe until an ecotourism economy could turn the poacher into the protector. What’s “big money” to an elephant poacher, after all? $50! That’s it! (?!?) $50 will save one elephant’s life. To me, that’s fantastic, because a solution to this problem is realistic.

After all, have you priced out a jungle or savannah safari in Africa, lately? You can’t even get picked up at the airport for $50. But if you’re going to spend thousands of dollars on the adventure of a lifetime, you can find a company that invests heavily in the local community by employing experts native to those lands. The more profits that stay local, the more vested the local community will be in conservation efforts. The environment isn’t just these peoples’ home, it’s their livelihood.

When It Goes Right 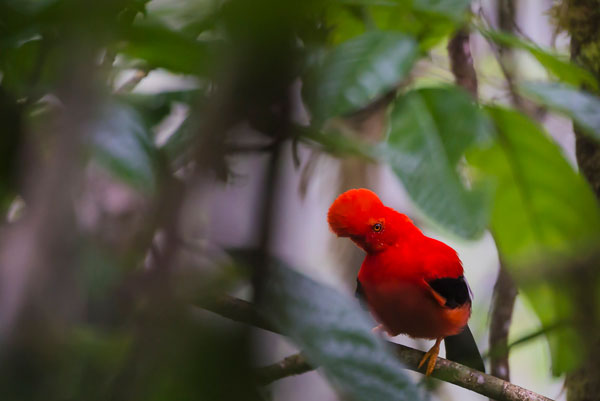 The Andean Cock of the Rock in Mindo, Ecuador

Compared to heavily deforested Guatemala (and frankly, other parts of Ecuador), Mindo, Ecuador is a success story. Instead of selling the native toucans, cuckoos, motmots, parrots, and other colorful birds into the exotic pet trade, the locals protect the wildlife and reap the tourist dollars that have started to flow into town. Some open shops or lodges, and others become bird guides. Much of the land is protected in a conservation trust.

Our guide, Irman Arias, spoke English and took us to all the best spots in the area. On a morning in late October, we paid Irman and our driver about $80 (he gets far more in high season). In addition to working as a bird guide, his family owns a lodge in town. Because of ecotourism, Irman’s living depends on the health of the environment.

Even when a local community works hard to protect their natural resources and benefit economically from their work, sensitive environments can only handle so much human activity. In Mindo, as more tourists discover the wonders of the place, there will be more demand for access to the wildlife, and more need for infrastructure to support all the extra people. Perhaps the Ecuadorean government, or even a local regulatory body, can control growth in a sustainable way.

On the Galapagos Islands, where there is great demand to see the many fascinating species unique to the region, they face the same problem. The Islands themselves were exploited mercilessly during the 19th and early 20th centuries, and as a result, many of the iconic species have either been completely decimated, or stand on the brink of extinction.

But despite this, the country is working hard to conserve the land and fix the problems that tourism has caused. Through strict regulations limiting the number of tourists that are allowed to enter at any one time, and by levying fees on the current tourist demand, they are able to raise revenue that is allowing them to invest in island conservation and better protect the landscape from future destruction.

It is my hope that more sensitive destinations will realize the benefits of ecotourism in sustaining and improving their communities for generations to come.