Our trip to Tofino, British Columbia started as too many of our trips do — locked out of an AirBNB apartment.

We were traveling with our B.C.-native friends Ryan and Rita. They had picked us up in Victoria and we headed north. Tofino has been called the “jewel of Canada’s West Coast” and National Geographic Traveler named it one of the word’s best surf towns. Our friends are avid surfers and they lived in Tofino each summer back in college. When they found out we were planning a trip to Vancouver Island, they asked to tag along and meet up with their friends in Tofino. We were eager to see some nature and take one of the town’s black bear tour or do a whale watching trip.

When we got to town, they dropped us off at our rental to check in. We found this note from our host on the door: “Cassie, you are in Room #3. It’s upstairs, through the staircase around back. Please go in and make yourself at home. I’m taking my husband out to celebrate his 60th birthday and I’ll be back later tonight.”

Unfortunately, she forgot to include the locked door’s code combination. We were in Canada, so we didn’t have internet or cell phone service. Even if we had, I hadn’t written down her phone number. To top it off, we weren’t even sure exactly how long it would be before our friends would come back to pick us up for dinner. We sat on the porch surrounded by our bags, discouraged. The sun was going down. I was cold.

Luckily we didn’t have to wait very long before our friends returned to save us. They had gone to pick up their friend Marty, who, as it turns out, lived just two blocks away.

Before dinner (at a local pizza shop Rita once worked at), they insisted we make a quick stop at the town’s harbour (spelled with a “u” because, Canada). This was our first good look at the town at the heart of the Clayoquot Sound, a stunning landscape of mountainous islands, islets, and coastal rainforests. The place is so special, the entire region–Tofino, and all–has been designated as UNESCO Biosphere Reserve. The town’s colorful harbor, boats, and sea-planes were lit up in the warm evening light. I haven’t been to Alaska, but it looked to me like photos I’ve seen of small Alaskan harbor towns, just a bit more green and colorful. 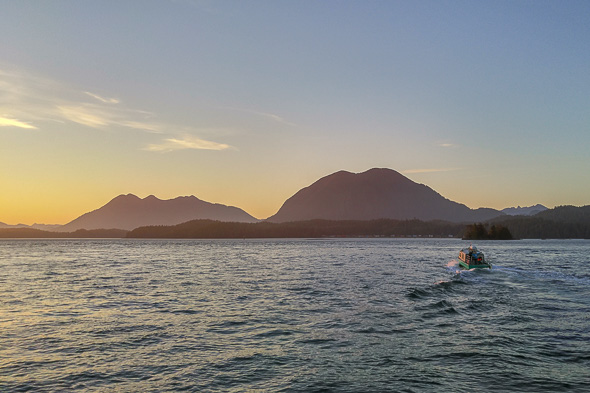 There were dozens of people out to enjoy the evening display. Marty stopped to chat up several people, and I got the idea this was an everyday thing. And after a few minutes, we could see why. A perfect sunset over the islands, closing out our first day in Tofino. After sunset and then dinner that night, we loaded back into the car to try to check into our apartment again. But before we could pull out of our downtown parking space, Marty said, “Hey, is that the woman you are looking for?” pointing to a small group of people crossing the street. I paused for a second, confused, when he continued, “you said her husband was a fisherman,” he had recognized the family as that of a local fisherman and innkeeper. “Is that them?”

I got out and cautiously called out the host’s name. The group stopped, looking surprised, and a woman in the middle of the group replied, “yes… Cassie?”

We had just booked the room for one night. The next day we were planning to reconvene with Rita, Ryan, and a few of their friends driving up from Vancouver. As a group, we booked a condo for the rest of the trip at the nearby beach resort, the Long Beach Lodge.

So the next morning, Kevin and I packed up our stuff to check out. We had a free day on our own and planned to spend it doing some kind of local wildlife or photography tour.

As we got our things together, our host came up to our room.

“I wanted to tell you again that I’m sorry for last night’s confusion.” We told her it was fine, it was nothing serious, we were with friends, and so on.

“No, I’m sorry… please take this as a gift,” and she handed me something cold. “It’s candied salmon, my husband caught it last season.” The gesture was sweet but totally unnecessary. I love the story — no one has ever apologized to me with fish! Much less fresh-caught Pacific salmon, candied and ready to snack… we couldn’t say no.

We were hoping to spend the day up close and personal with some big Canadian wildlife. Grey wolves were at the top of our list, followed by bears and orcas. Our friend, Dave, had visited Tofino just a few weeks before us and recommended the wildlife and black bear tours led by Remote Passages Marine Excursions. After checking out of our place, we walked down to their office. The woman at the desk told us right away that there are no commercial wolf tours–the region’s small, albeit, recovering population of grey wolves mostly live on remote stretches of the island farther north, and they don’t recommend tourists try to head into the woods to look for them on their own. It’s dangerous, and they don’t want to risk scaring off this sensitive population.

While the whale watching tours head out into the open ocean on larger boats, the black bear tour takes you out deep into the Clayoquot Sound on small zodiac boats. These are places with no roads so the bears are can move across the landscape freely. The hope is that we would see the bears feeding on coastal clams and crabs they dig up on the beach. In nimble boats, you can get closer to them than you ever would be able to get on land.

But safety first! They made us wear these goofy “float suits”… The mountainous wilderness was stunning, with untouched forest for miles around.

About 20 minutes into the trek, our guide slowed the boat and told us to be quiet. He’d spotted a large female bear and was preparing to get close. He turned the engine down, and inched the boat toward the shore.

She was beautiful, and we watched her for about ten minutes as she picked around the rocks, looking for mussels and crabs. Occasionally, she’d find a good one, crack it, and throw it back, mostly ignoring us.

Once she looked over at us and we feared she would run. We stayed very still, and eventually, she continued her hunt. As we were going to leave, we heard something squealing in the trees. We looked up to see two tiny cubs up in the branches, looking down at us! Our second bear sighting was in a small bay, and there we were able to get a bit closer to a mother bear and her two small cubs. For the first few minutes we watched them, the babies were wrestling and we joked that it was one mama and one roly-poly “bundle of bear”. Eventually, they separated and started to look around on their own. Our guide explained that while they were still likely to be nursing, mama was trying to teach them how to forage, how to identify food, crack it open and so on. It was cute to see the curious cubs in the wild–learning. After those two sightings, we were relieved. Wildlife tours are always a bit of a gamble. You’re almost never guaranteed to see any specific species on these tours–if you are, they probably aren’t a very responsible tour operator. We had seen six bears, including four cubs–we felt lucky.

As we headed back to the harbor, we spotted fins. It was a pod of orcas! At one point we saw four fins in the air. We stopped again, and watched these beautiful and threatened animals pass us by. We made other stops along the way for some beautiful birds. A fishing osprey, getting ready to dive… …and this majestic bald eagle, perched on a rock. At closer glance, we noticed he was grasping some kind of prey in his talons. When we edited the photos, I saw that it was a fat black cormorant. I’m not sure you can tell here, but zooming into these shots, I can see his blood-stained beak. As our boat returned to the harbor, the tour staff greeted us with cups of peppermint tea, “this should warm you up!”

But my heart was still racing and my blood was pumping from all that we had seen and encountered so far.

Tofino, what a beautiful place!

Want to try AirBnb? It’s still a great service, even if you’re disorganized and get locked out like me. Use this link and get $30 off your first Airbnb stay.