“You ate Cinnamon?!?” my mom exclaimed, horrified when she heard the news. I was telling her how I’d sampled the Peruvian delicacy, cuy, known in the English-speaking world as guinea pig. “Cinnamon” as you could probably guess, was the name of my childhood pet.  The decision to try cuy wasn’t easy for me for this reason, but I’m a big believer that the best way to understand a culture is through the food. The act of eating guinea pig in Peru is rooted in traditions that go back thousands of years, even before the Incan civilization.

Before you read any further, this article contains graphic descriptions and pictures, so for those of you with weak stomachs, consider yourself warned, and put the kids to bed.

The setting was Ollantaytambo, which we talked about mentioned in our update from the Sacred Valley.  Across the cobblestone alley from our hostel was a family-owned restaurant, with a poorly-worded sign that read, “Try to eat our guinea pig.”  I decided this was as good a time as any to take the plunge, since Cassie and I had an afternoon to kill in the town before our early evening train to Machu Picchu.

The scene of the crime

I was confident that I could do this as we entered the restaurant courtyard.  That is, until we walked by a display of guinea pigs living in what amounted to a multi-story, adobe dollhouse that would be the envy of any pet owner.  I told myself that these were just for display.  Surely they had my future dinner marinating already, or perhaps awaiting a savory spice rub. 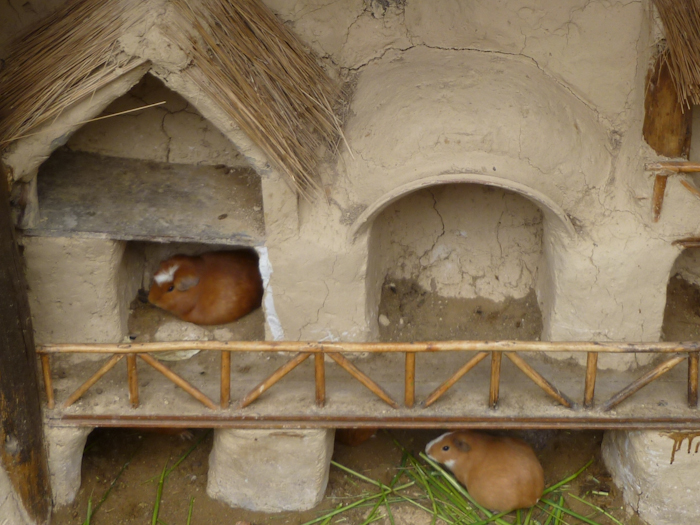 So by the time Cassie and I were seated, we were a little edgy considering the impending food adventure I was about to take.  We ordered a pitcher of chicha (homemade Incan corn beer that I’ll write about more later), and our host was telling us about how the beverage was made when we heard a loud bang and a hiss of what was clearly an open high pressure valve of some sort.

“Gas!!!” we heard yelled from the first floor kitchen, followed by the screams of women and children.  We bolted down the stairs, past the guinea pig house, and out of the courtyard to a safe distance.  Luckily, there was no fire, but one of the cooks had been sprayed in the face by the flammable liquid.  He ran out of the complex in pain, as a woman applied a salve to soothe his red, irritated face.  They disappeared down the street, headed for the local medical clinic. We later discovered he had to go all the way to Cusco (90 minutes by car) in order to get the proper care.

After about 10 minutes, the “all clear” came through and we returned to our seat at the table, and if we were on edge before, we were really nervous now.

Could this get any worse?

Where Cassie was seated, she had a visible line of sight to the guinea pig enclosure. Suddenly, she yelped out in horror. She had just seen one of the cooks grab a white guinea pig from the pen, break its neck, and carry its lifeless body back to the kitchen.

“El Cuy Blanco” had met a quick and painless end, but for Cassie, a vegetarian, this was no easy scene to witness.  I now had what felt like an eternity to ponder the consequences of my ravenous appetite for meat.  But before our meal arrived, Cassie saw the same cook approach the enclosure again.  This time, I forced myself to watch as he grabbed another animal and sharply, twisted its neck.  As if that wasn’t enough, he then held it by the back end and bashed its skull against the wall to be sure he’d finished the job.  I watched silently as he went back to the kitchen, dangling the limp carcass about a foot away from his body.  I later went to use the restroom, and on my way back, I noticed a trail of blood drops that led from the cuy enclosure to the kitchen.

I was about to eat a guinea pig.

The gravity of the situation had set in.  So by the time our meal arrived, I thought I was prepared to do what I had to do.  I wasn’t.  The plate placed in front of me left nothing to the imagination.  The animal had been roasted whole, the legs and head were intact, and even his two front teeth and whiskers were still clearly visible. 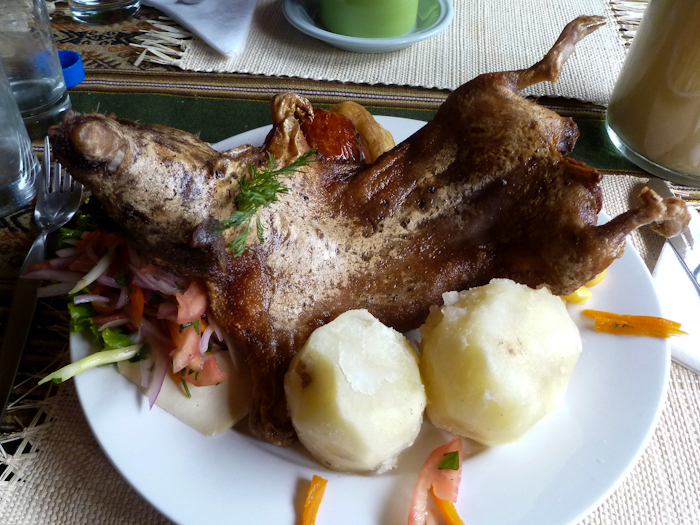 This guinea pig gave its life for me, so the least I could do was honor it by eating everything on my plate.  It was challenging to take the first bite of skin, but I had to admit to myself that it was actually quite delicious.  I broke off a back leg and cleaned the bone of meat.  The texture is very similar to dark meat chicken, and the taste is close, but still exotic enough that when you eat it, you know you’re not in Kansas anymore. 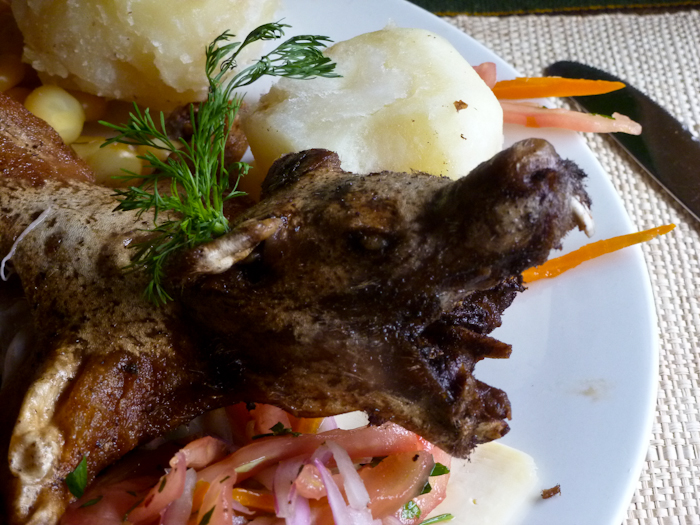 Due to the many delicate bones, eating cuy is a surprisingly time consuming process.  While I was eating, Cassie tried not to watch, as she finished the light meal she’d ordered.  Her face had gone pale.  She would later find out this was actually the beginning of a bout with food poisoning (unrelated to my cuy, of course).  She got up and went outside for some much needed fresh air, leaving me alone to finish the job at hand. 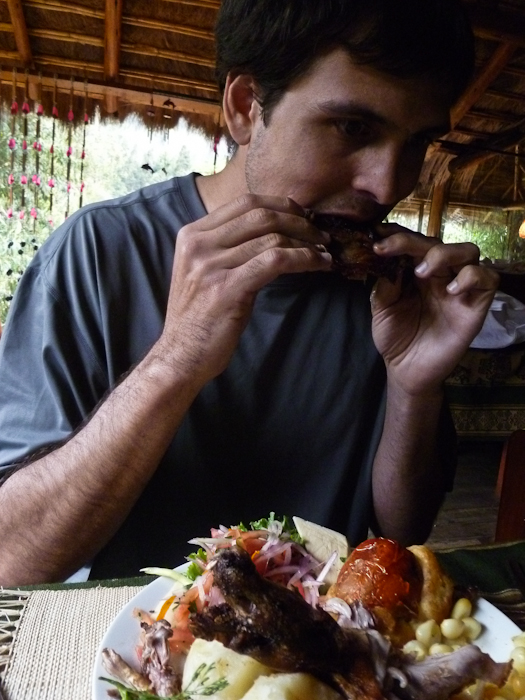 Getting down to business

According to Peruvian tradition, the brain is actually the most sought after morsel.  To get to it, though, obviously you must crack the skull and scoop out the exposed gray matter.  I regret to say this was the one thing I couldn’t bring myself to eat.  I ate everything else, including the side dish that was a pepper stuffed with the giblets, presumably the liver, heart, etc.  That was actually pretty tasty, too. 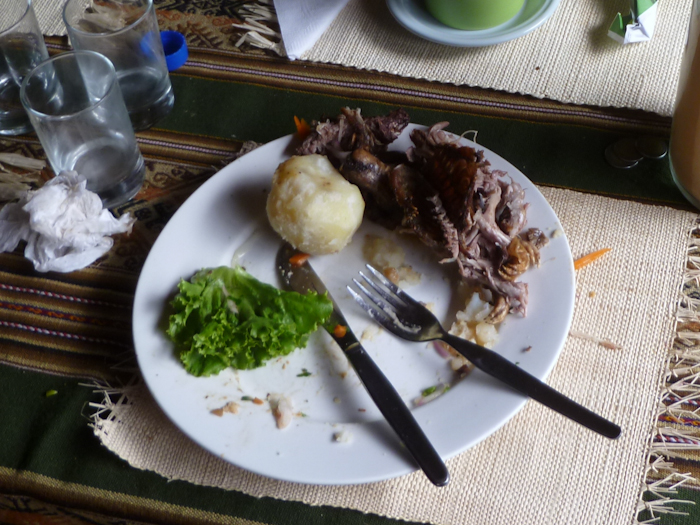 I can honestly say I’ve never had such a difficult time eating such a delicious meal.  And it’s obvious why.  As an American who has lived in a suburban or urban environment my entire life, I’m as divorced from my food as I could possibly be.  In light of the current controversies over pink slime, and likely coming discussions over things grosser than that,  perhaps this experience gives me a glimpse of the tradeoffs I’d need to make in order to eat healthier, safer food that is better for the environment.

So will I eat cuy again?

Doubtful.  But that’s not because I don’t have the intestinal fortitude to handle it (well, maybe it is because of that!) I just believe that Peru has so many other wonderful foods that I can let that next guinea pig live–for another few hours, at least.  Life is short when you have five thousand varieties of potatoes to try!

Should you try cuy?  Well, now that you know what to expect, perhaps the only shock you’ll experience is how good it tastes!