When I started looking for a hotel in San Diego, I considered several options. Having been to San Diego before, I knew that I wanted to stay in one of the city’s great neighborhoods rather than the downtown/Gaslamp district where I had stayed several times before. So I first turned to one of my favorite accommodation sites, AirBnB.  My first choice (and one of the cheapest options overall) was this fantastic-looking “luxury RV!” Kevin axed that idea. For some reason he wasn’t keen on paying to sleep in an RV in someone’s back yard, as cool as it looked.

I then saw a review of The Lafayette Hotel Swim Club & Bungalows. It looked nice and reviewers said it was affordable so I priced it out. Rooms started at only $79.  Plus it is located in North Park, a neighborhood I really like, so I went ahead and booked a room. 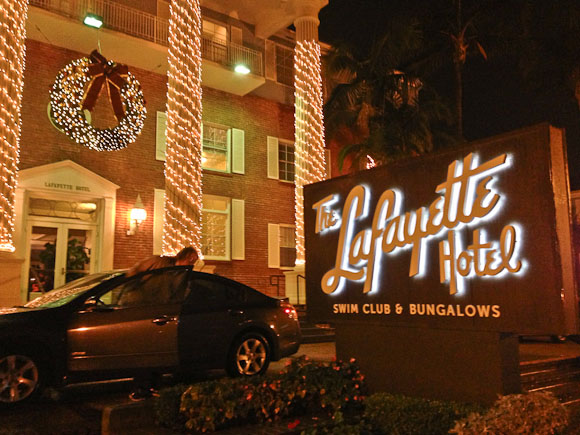 When we pulled up to The Lafayette, we were surprised at how grand-looking the front entrance was. Turns out the building is on the National Register of Historic Places. From the time it was built in 1946 through the 50’s, it was a popular vacation resort and hideaway for stars including Bob Hope and Ava Gardner. It is located on El Cajon Boulevard, which was a major thoroughfare at the time. In the 60’s after construction of the freeway, Interstate 8, much of the traffic was diverted off of “The Boulevard,” leading local businesses to falter, and the hotel building was eventually abandoned. In 2004, it was purchased and refurbished with attention to the original mid-century styling. 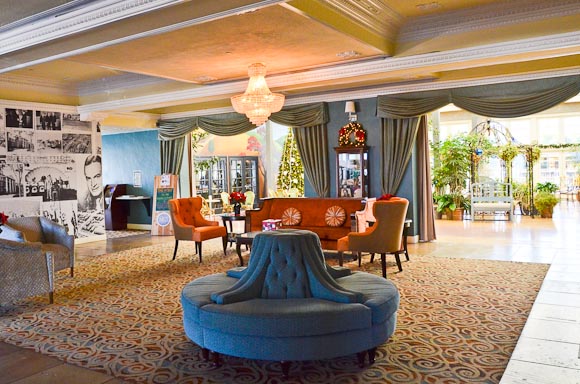 The rooms had nice modern furnishings, flat screen TV’s, LOTS of electrical outlets, and even USB charging plugs conveniently located on top of the desk and the TV stand. The thing that often bugs me about old motels (built  prior to the days of travelers with lots of electronic gadgets) is the lack of outlets and inconvenient placement of them, which usually forces me to unplug a lamp or the clock radio. Otherwise the rooms were simple, but comfortable.

One annoying thing about our room was that the bathroom didn’t have a fan and the smoke detector was on the ceiling right next to the bathroom door. This meant that if you left the door open even a crack when you were in the shower, the steam would make the smoke alarm go off. That happened a few times, but it wasn’t a huge deal once we made sure to keep the door closed. 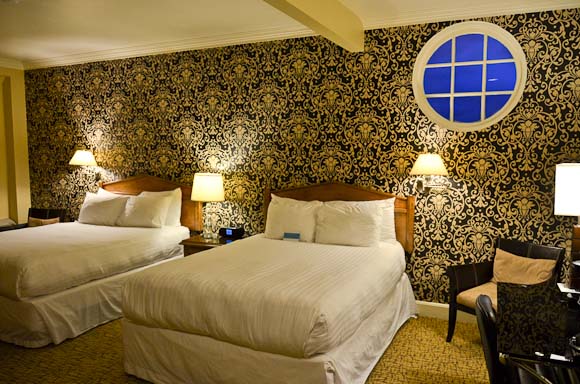 They had a pretty spectacular looking swimming pool that is apparently open to the public for weekly pool parties when the weather is nice. We were there in December and as sunny as it was, it was too cold for that. However, from the water splashed on the deck the morning I took the following photo, I guessed that someone had braved the water! From the reviews I read, if you aren’t looking to party and want to avoid noise into the evening, stay away from the poolside rooms in the summer. 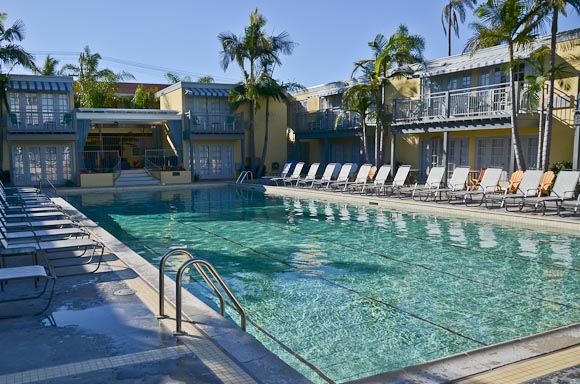 The restaurant Imigs Kitchen and Bar is an homage to the original name of the hotel, the Imig Manor. We didn’t eat there, but they had a good-looking menu. We were there right before Christmas, so we tried a few of their seasonal cocktails. Their homemade egg nog was tasty but ridiculously strong (bourbon, rum, AND Frangelico, I believe)!  They were playing the movie, “Christmas Vacation” at the bar on a loop, which was fun. 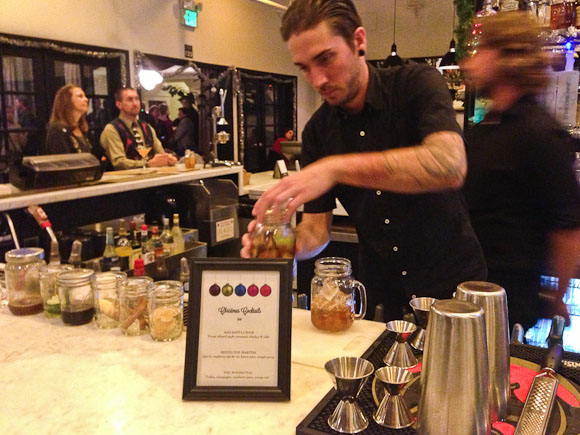 The place had some other quirky features. Many of the rooms had number plates that had movie quotes from the 40’s and 50’s. This one was interesting (personally, I prefer the bus). 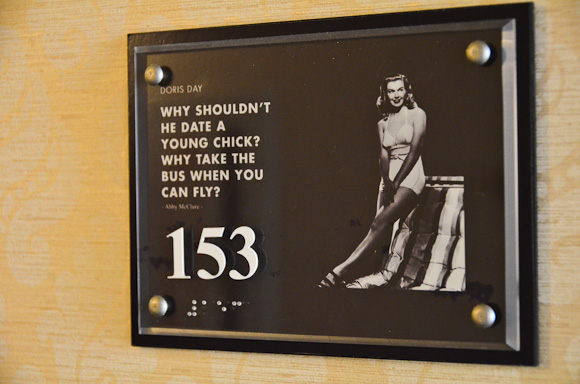 There was a giant chess board on the patio. 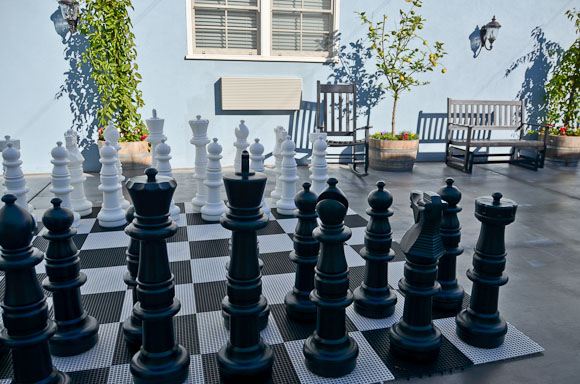 One of the lobbies between the pool and the restaurant looked like a fairy wonderland, strangely juxtaposed with what appeared to be a rustic mural of rural California farm workers? 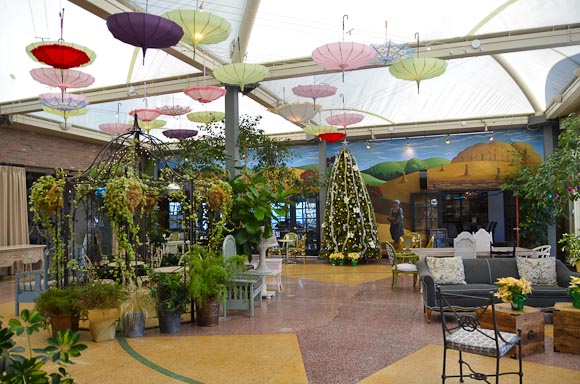 It is not located right in downtown North Park, so you do have to drive to get to the neighborhood center where many of the shops and restaurants are. But the city is doing a lot to redevelop El Cajon Boulevard. The night we arrived, the local business district was sponsoring a monthly (I think) event called Boulevard Nights which featured art and food events up and down the street. The event started with hot cocoa at the hotel and a press conference to thank the donors and city agencies that funded the holiday lights adorning the business district (I’m a sucker for wonky public meetings, so I had fun hearing the mayor and county supervisors speak about community redevelopment). Afterward, we walked a few blocks down to a mid-century decorated 24-hour diner, then continued on a few more blocks  to a gallery art opening.  We ended the evening at the homebrewed beer tasting we mentioned here. We had a lot of fun and the walk home at the end of the night took only about 15 minutes.

The Lafayette Hotel was an excellent place to stay and a great bargain, and we’ll definitely go there again the next time we’re in town. Check them out if you are planning a trip to San Diego!