On a recent trip to New Mexico, we began the day at Carlsbad Caverns and ended it at sunset in White Sands National Monument. In one day, traversing miles of open country, we experienced two of the most beautiful and unique places to be found anywhere on earth.

In short, Carlsbad Caverns is simply awe inspiring. As an American, it’s easy to underappreciate the sites in my own (albeit very large) backyard.  But it’s difficult to imagine anywhere more exotic.

The caves were originally discovered in the late 19th century by Jim White, who told the tale of seeing a smoke cloud emanating from the ground. As he went to investigate, he found not smoke, but millions of bats flying out of the cave at dusk.  He later went on to explore a fair amount of the cave, and when you visit, you’ll see that this was an act of considerable bravery.  It’s pitch black, and you say millions of bats live there?  What could go wrong?

The entrance to the cave is a steep (about 800 vertical feet), but not too challenging, hike of about a mile before you enter the Big Room, which is where the bulk of the easily accessible formations can be found.  If you choose to skip the hike, they also have an elevator that takes you down more than 70 stories.  But hey, it sure beats taking the guano bucket!

From there, you can marvel at the amazing diversity of geological features… stalagmites, stalactites, draperies, popcorn… the Caverns have it all.  And though it’s microscopic, there’s a surprising amount of biological diversity as well.  If you think there can’t possibly be life on Mars, try to imagine bacteria that live in complete darkness and feast on solid rock.  These bacteria can be found all over these caverns. 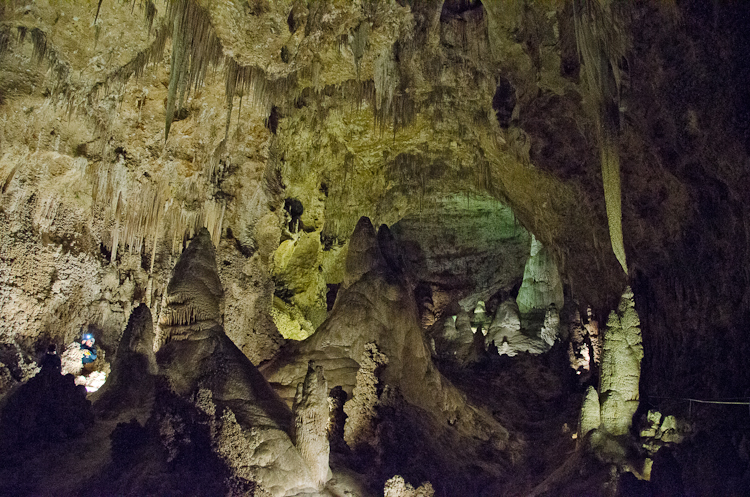 The Big Room at Carlsbad Caverns

At any rate, the bats aren’t around until April, but I’d say that February is still a pretty good time to go if you care to avoid the nearly half million visitors Carlsbad gets every year.  The temperature and humidity inside the cave is naturally constant year round because the cave is a natural wind tunnel, so while it can be freezing 750 feet above you, the caves feel warm and fresh.  “Where it blows, it goes,” say the spelunkers who explore these caves, meaning that if there’s airflow, there’s more cave to discover.

On the day I was there, I felt nearly like Jim White, discovering the caves practically in solitude.  Sure, there was fancy lighting on all the structures, and there were a few scientists taking precise measurements of the features in a particular section, but it was mostly empty, with maybe 50 other people present while I was there.  I’ll go back someday for the bat fly out, but it was nice to be able to walk the one-way trail without a herd of people nipping at my tail.  It allowed me to set up the tripod for a few shots.

After bidding farewell to the caverns, we hopped in the car for the long drive northwest to White Sands.  The phenomenon is due to the evaporation of mineral-rich Lake Lucero, which leaves behind selenite crystals.  Gradually, these crystals break down into fine, white gypsum powder, and wind forms sand dunes over 275 square miles of desert.  Due to the ephemeral nature of the resulting structures, plants must evolve very specific mechanisms to survive without getting uprooted and blown away.  And as you might suspect, nobody really cares if you walk off trail, because the wind will cover your tracks in minutes.  What you see exists only in that moment, and is gone forever the next.  This place is always changing. 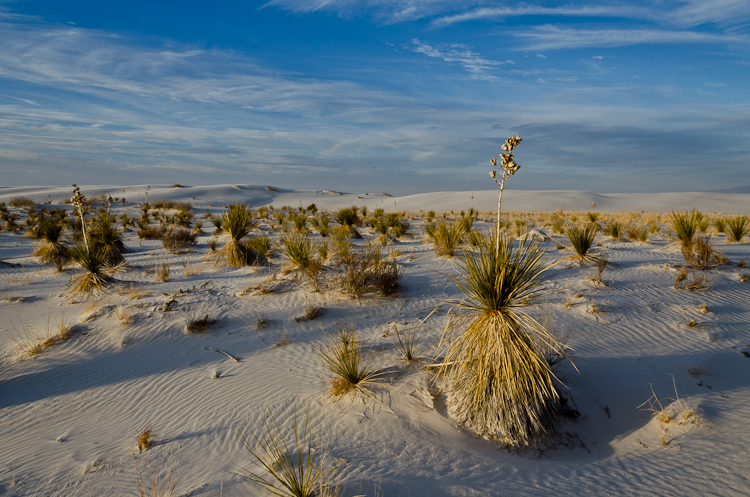 That is, of course, except three things…  The sand is always white, the wind always blows, and the sun always sets over the mountains in the west.  And this sets the stages for one of the most amazing light shows you’ll ever witness.  As the fiery red and orange sunset splashes across the sky, the lights reflect on the white sand, giving it an eerie, pink aura that lasts for but a few fleeting moments.  I could look in any direction and see vivid colors, and the event had me spinning in place, because as I turned, each view was more breathtaking than the last.  It’s an understatement to call the whole thing “emotional.”  I’ll let the photo speak for itself. 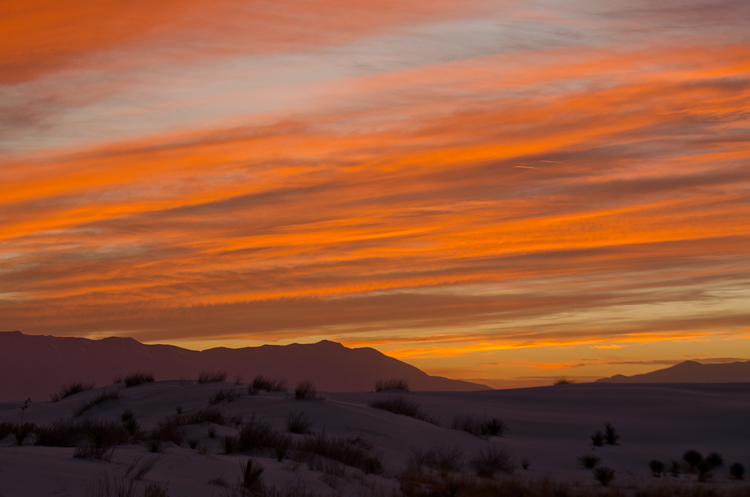