We had just come from one of the main tourist attractions in Bogotá, Colombia, the glitzy, Museo de Oro (Gold Museum).  It was the evening rush hour and we were waiting to cross a busy intersection near the TransMilenio bus station.

Suddenly a young man carrying a box of white bread sandwiches and cups of milk rushes through the crowd, apparently rushing to catch his bus. He stumbled on the curb and crashed to the ground, sending his snacks spilling to the ground. 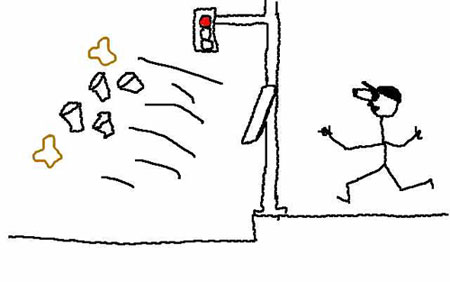 I looked at his face and his lip started to quiver. The poor guy! There went his entire night’s pay, all of the milk pouring down the gutter, and sandwiches in a jumble on the dirty street!

I fell to the ground offering to help clean up, “Necesita ayuda?” I grabbed one of the cups. He put out his hand to stop me and push me away, just as the tears started to fall from his eyes.  I backed off and dropped the cup.  Clearly he was close to a breakdown, and I felt it best to keep my distance. We crossed the street feeling awful for the guy.

As we waited in line for our bus tickets, we saw him from the corner of our eyes, still having a near panic attack near the pile of food. Kevin’s dad said, “We should have given him some money…  That was his entire night’s pay.”  We were torn, I’d tried to help him and he’d pushed me away. But I regretted not handing him a few dollars.

The line to the bus station was long because of the evening rush, but he stayed in our mind as we boarded.  After a few minutes, Kevin asked me, “Maybe I’m just jaded, but was that an act?” I agreed to the possibility, though the thought felt cruel. Then I pushed the thought aside as we dealt with interpreting Bogotá’s metro map and figuring out how to get to our hotel.

Finally, we pushed through the crowd and boarded a crowded bus.  As we left the station, I scanned the street and noticed the sandwich vendor was still on the corner, more than 10 minutes later, sitting on the curb holding his head in his hands.  At that moment, I saw a man approach him and hand him a small bill which he gladly accepted.  Again, he reached over to the pile to start to clean it up, pulled back, and started crying out in desperation, his hands covering his face.  Another woman came over and handed him some change. 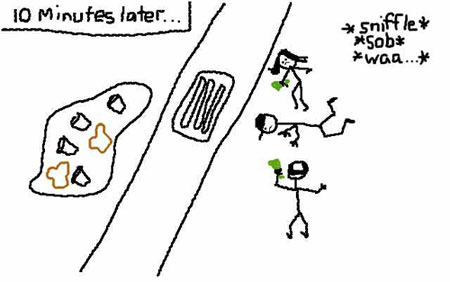 This is when I realized that of all the Bogotá street vendors, no one was selling cups of milk and white bread sandwiches!

We were now certain it was a scam. For the price of a loaf of bread and some milk-tinted water, someone could make several times more by playing off the sympathies of people like me.  The scammer could then pick up his bread, fill his cups with more water, and start the performance again somewhere else.

I appreciate street performers. Seeing their creativity and antics can make a visit to a tourist center a memorable one. (One of my favorites is the San Francisco Fisherman’s Wharf Bushman, who stands perfectly still, made up to look like a shrub, then scares the crap out of unsuspecting visitors by jumping out on the sidewalk!)

And I LOVE street vendors. I will buy almost anything edible that is sold from a cart.

But I don’t love being ripped off!  The last thing I want to do is encourage this kind of parasitic behavior.

How to avoid being caught up in this scam?

[Thanks to Kevin for the lovely cartoons]

Have you ever been scammed while traveling? And who thinks Kevin should NOT quit his job to become a cartoonist?