Each November, cultures around the world celebrate holidays to remember ancestors and loved ones who have passed away. In Mexico (and the U.S.) we know this day as Día de los Muertos (“Day of the Dead”) but in Ecuador, they call it Día de los Difuntos (literally, “Day of the Deceased”). The Day of the Dead in Ecuador coincides with the Catholic holiday of All Soul’s Day and is observed from October 31 to November 2. The holiday is inspired by Catholicism but incorporates indigenous traditions unique to each region.

Last year at about this time, we were traveling in Ecuador. I noticed signs hanging on the windows of every restaurant and cafe advertising specials on something I’d never heard of, “Guagas de pan y colada morada.”

It took me a few days (and a few hurried conversations with shopkeepers) before I pieced together that these were seasonal foods made to celebrate the day of the dead. 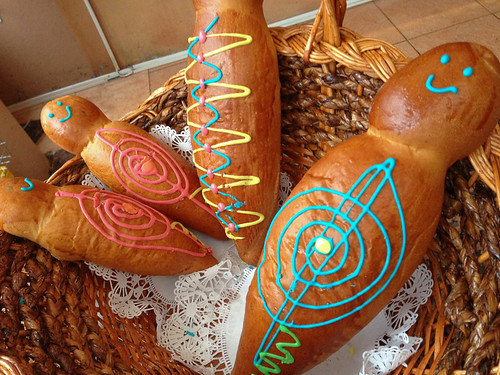 Colada morada is a thick, sweet purple corn drink cooked with mashed berries and spices and served hot. Guaguas de pan are sweet breads shaped like babies — guagua is a quechua word that means baby or child. In writing this, I learned that this quechua word is commonly mixed in with Spanish, and many Ecuadorian parents say “mis guaguas” to refer to their children. Eating these sweets is meant to give sustenance to ancestors for their travels in the afterlife.

We bought guaguas de pan and colada morada from a street vendor in Quito. It was a stressful interaction. It was the beginning of the trip and I was cautious about eating anything that may not have been made with purified water.  My defenses on things like this always drop after a few days on the road in developing regions, and I rarely get sick, but we were traveling with Kevin’s dad who had had some recent health problems, so I was a little worried about his immune system. I decided to risk it, and we were all just fine. 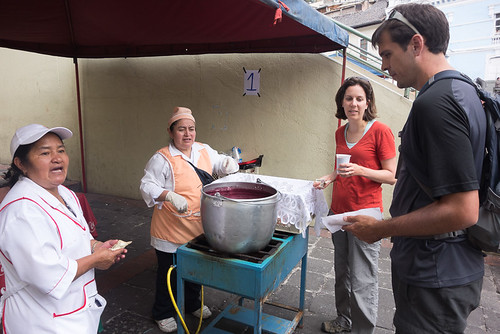 I remember asking the ladies if there was any particular way you were supposed to eat the bread and hot beverage (e.g. dip the bread in the colada? Eat the dense colada with a spoon? Not eat the guagua’s head?) They looked at me like I was crazy, and I realized I was over thinking the tradition and we just ate it as we strolled. I still felt weird eating the baby’s head. 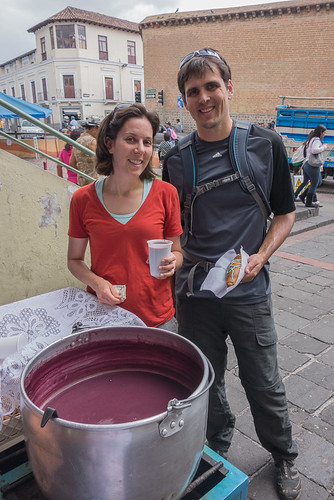 Guaguas de pan and colada morada are often made at home. A few days later, I stumbled upon the grandma of our family owned-guesthouse in Mindo cooking colada morada on the stove. The purple color of the drink was beautiful and the smell of spices and simmering fruit filled the house. Still, some busy urban parents buy it from stores to take home. We saw this sign at a chain bakery in Quito advertising their guaguas (filled with cheese or fruit preserves) and family-size jugs of colada morada. 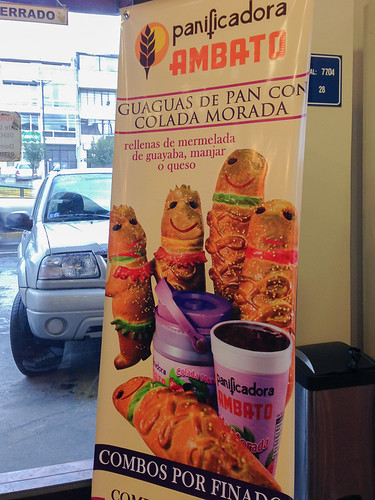 On November 2 we arrived in Otavalo, a city in the Andes with a majority of indigenous, quechua residents. We got stuck in massive traffic getting into the city and arrived there late in the afternoon.  I hoped to see lots of indigenous dress and candle-lit handmade altars like I was familiar with in the Mexican “Día de Los Muertos” tradition. As we learned, Día de Los Difuntos in Ecuador is celebrated quite differently.

Rather than going on into the night, most families visit the cemetery during the day. We arrived at dusk to find the crowds leaving the cemetery, not arriving, and street vendors closing down. We spotted this vendor selling more guaguas de pan with colada morada… 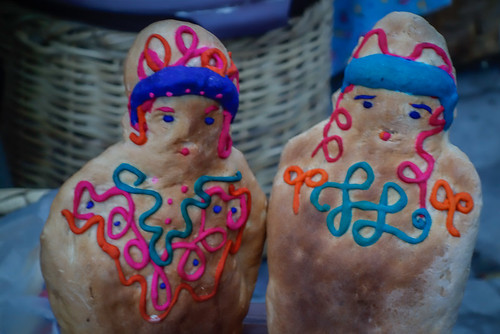 … And this one selling floral arrangements. 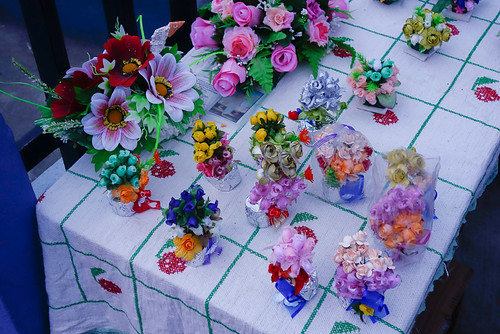 The Otavalo cemetery,  like other Latin American cemeteries, is an impressive place. It a whitewashed, walled city with vast white mausoleums and the (more reasonably priced!) vaults stacked six levels high. 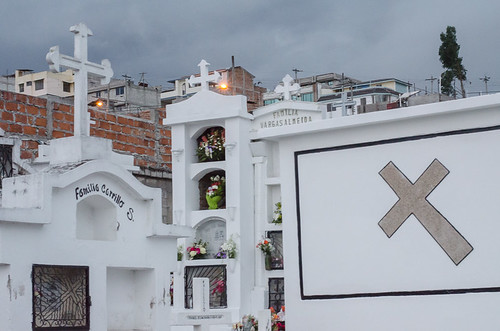 Families gathered beside the tombs of loved ones placing flowers, wreaths, photographs, stuffed animals, toys and other trinkets at the grave site. 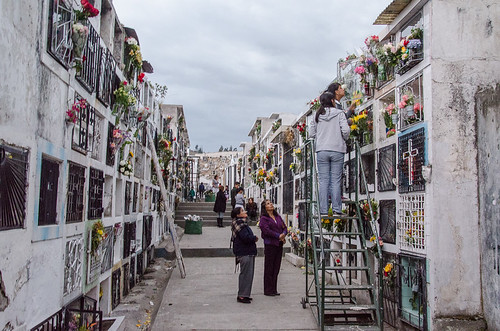 Though the observance wasn’t that different from the American practice of visiting graves and leaving flowers on Memorial Day, the colors and shapes of the large, dense graveyard was a big difference from the green, park-like and (somewhat sterile) graveyards I’m used to back at home. 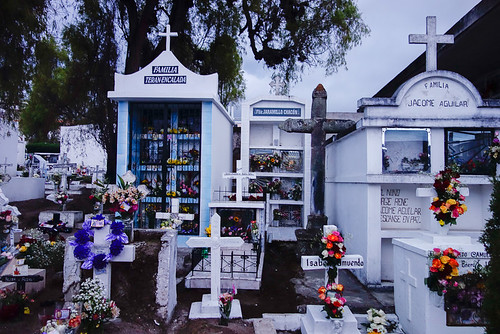 Through the beauty of the internet, I sometimes learn more about a place after leaving it. In writing this, I just learned that there were actually two different cemeteries in Otavalo. We visited the mestizo (mixed/Spanish heritage) cemetery, which is the more subdued and Catholic-influenced practices which explains why it didn’t seem all that different from visiting a cemetery at home. There is also an indigenous cemetery in Otavalo which is a bit more festive and lively where families would camp out all day and eat their meals at the grave site. This was the uniquely Ecuadorian celebration I was actually looking for. Oops!

Still memorializing lost friends and family is an important tradition in Ecuador, and if you visit during the Day of the Dead, join in the celebration and take the time to remember family and friends you’ve lost.

Share39
Tweet13
Pin78
130 Shares
« Mono Lake: A Sunrise Walk on the Moon
Fall Colors in the Eastern Sierra and Yosemite »