I’m spending my blog time this week editing photos, including  those from a few recent weekend trips. First, and most challenging to work through (because we took over 1,000 shots!), was the New Year’s weekend trip we took to Southern New Mexico’s Bosque del Apache National Wildlife Reserve.

Photography is serious business on Kevin’s side of the family. While I consider myself kind of obsessed with capturing good photographs (post on that coming later this week), Kevin’s mom and uncle are seriously nuts! I mean that in the kindest of ways; they are both exceptional photographers, but their devotion sometimes makes them do irrational things.

Each winter tens of thousands of birds gather in Bosque del Apache’s wetland areas. The preserve is one of the United State’s top wildlife photography destinations and thousands of of birders flock there each year in pursuit of the pefect shot. Thus we found ourselves spending New Years weekend in a very cold, very snowy, and very small New Mexico town, getting up before dawn in the midst of a blizzard and standing outside for hours. The things we do for photography…

Like I said, I’m still working my way through the photos we took that weekend, but until I sort through them, here are some of the shots I shared on Instagram. Some of my favorite images were the self-deprecating series I called, “Photographers Are Insane”.

Photographers are Insane, Part I. Leaving the motel at 5:30 am to catch the birds before sunrise.

Photographers are insane, Part III. Can you see the smiles under those layers?

Photographers are insane, Part IV.  Even when the snow stopped, it was flipping cold!

Still, it was worth it to get these shots! Snow geese take flight at sunrise.

Sand hill cranes take some time in the morning to warm up before lifting off.

Snow geese come in for a sunset landing.

Fine. The snow is pretty.

Side trip to the Salinas Pueblo Missions National Monument. The red sandstone ruins of 17th Century Spanish mission churches in the village of Abo.

Side trip to the Very Large Array (VLA), a series of 27 jumbo radio telescope antennae spread out through a remote part of the New Mexico desert. Like a scene out of a sci fi movie–in fact scenes from Contact, Cosmos, Terminator Salvation, Transformers, and Independence Day were filmed here. 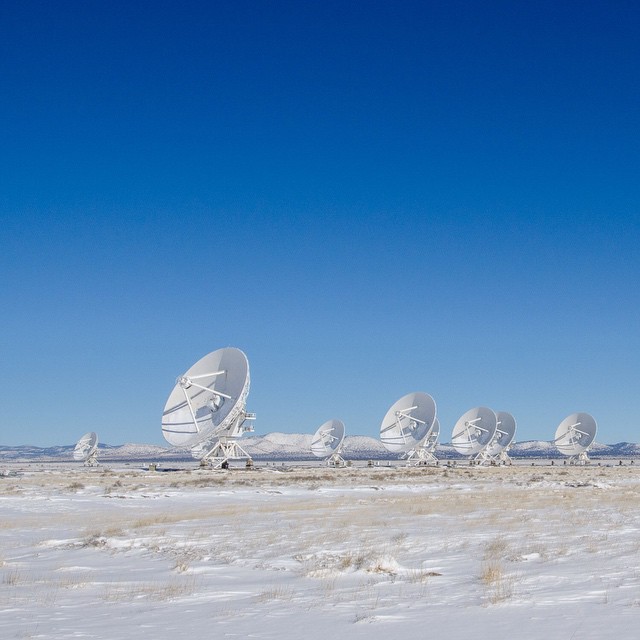 Braving the snow for the perfect shot: Yay or Nay?