This past week, we went to Denver and to the Vail resort town of Keystone, CO to attend the Travel Bloggers Exchange (TBEX 2012), a gathering of over 700 travel bloggers and “new media travel writers”, a phrase for journalists, writers and other creative types who use the web to share their work. We had a lot of fun, met a lot of new friends, and learned some things that I’m certain will improve my writing, new media, and marketing skills on this blog, and off.

I still need some more time to fully process everything that we experienced in this past week but I wanted to share my thoughts on TBEX 2012 in a three-part series as follows:

Denver is a fantastic starting point for a conference of this sort, as it offers something for every type of traveler. For us, the thing we love most about Colorado is how it is a craft beer mecca! The conference organizers jumped on this, offering an assortment of pre-conference (“Pre-BEX”) events at local breweries and restaurants. This was ideal for giving a casual environment to orient a bunch of people who didn’t know each other.  The Wednesday night BrewCrawl event was one of the highlights of the whole conference. Some of the bloggers I met that night were people we hung out with throughout the rest of the weekend. 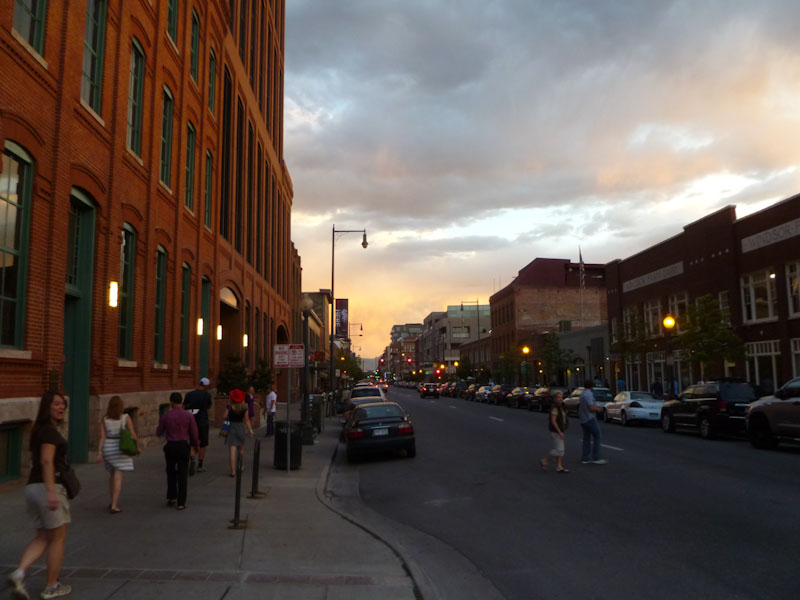 A relatively small group of people attended the BrewCrawl, so it was easy to talk to everyone, bloggers and community members alike. The Turner PR company event organizers were very fun and outgoing (most of them bloggers themselves) and we enjoyed hanging out with them and getting a local perspective. I’d never before heard Denver referred to as “Men-ver”, but it was funny to hear about the male-skewed gender distribution of the city! Our friend, Jeremiah, who we were staying with in Denver, joined us toward the end of the event and he had a great time. He was even inspired by his conversations to start to a personal travel blog himself! We also met Luke, a really great guy who works as a bike/pedicab driver downtown. He gave us an impromptu bike tour of downtown, returned my phone to me after I left it in his cab at the end of the night, and met up for drinks with us the next night! God, I love Denver! 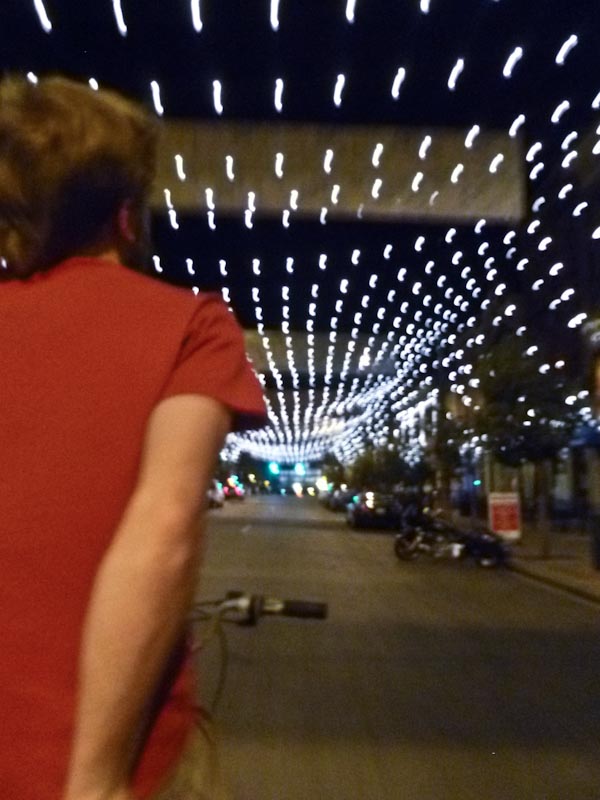 With Luke, on our pedicab tour of Denver

Other Pre-BEX events included free Denver museum visits that we didn’t take part in and the TBEX Road Rally, a team obstacle course/scavenger hunt that visit attractions from Denver to Keystone that I really wish we’d had the chance to do (we didn’t find out about it until too late).  The beer adventures itinerary was practically written for us!

On Friday, Kevin and I rented a car and headed off on the hour and a half drive to Keystone with our new friend, Nick. We checked into our respective condos which were attractive and spacious. I understand that a lot of budget travelers and backpackers were upset about TBEX deciding to locate at the remote Keystone resort because the hotels were pricy and the condos only slightly less so, but we now see how you could cut the costs by splitting a condo 2, 4, or even 6 ways. Also, we heard that at the 2011 conference in Vancouver, attendees were spread so far throughout the city in different hotels and hostels that it was hard to interact with many folks staying outside of your neighborhood. At least at Keystone you had a closed environment for lodging, so we got the opportunity to meet a more diverse group of attendees. 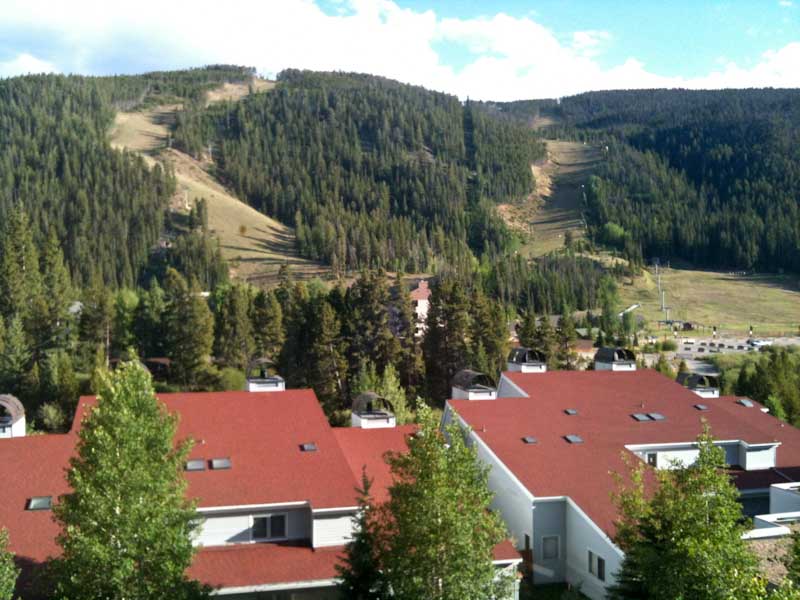 The view of the slopes from our condo in Keystone, CO

The high altitude of Keystone was an issue for several people, causing headaches and stomach cramps, and frankly, reducing the amount of alcohol that participants were able to consume. Apparently, the parties at the 2011 conference were crazy, it didn’t hurt that the event coincided with Vancouver’s appearance in the Stanley Cup finals! So the events were fun, but controlled and it was really nice to have a free shuttle to take you home at the end of the night! 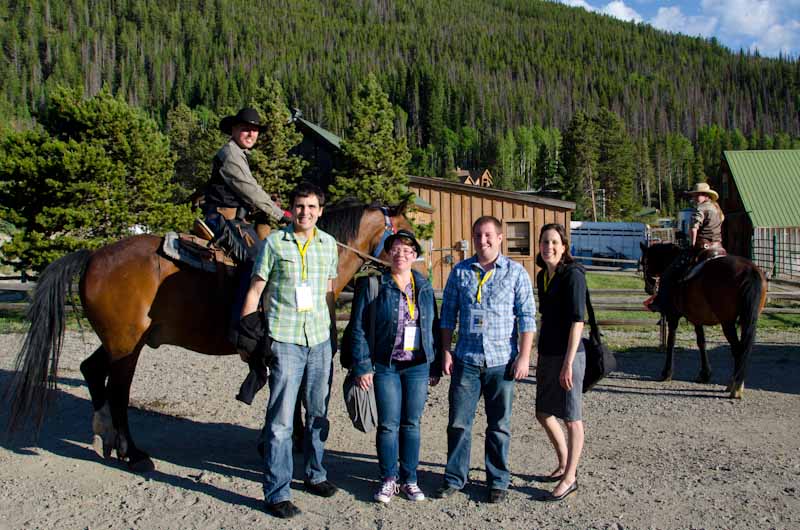 Other events were the Friday afternoon live-recording of Chris Christensen’s This Week In Travel Podcast, the extravagant Keystone Resort’s Welcome Dinner at the top of the mountain (including the creepy and surreal, 30 minute pitch-dark gondola ride to return home), and the Expedia sponsored Western-themed party on Saturday night. Good food and good drinks, but they were mostly great places to interact with our new friends, both established writers I had known going into the event, and the new ones I didn’t previously know about and am now excited to read.

Travel companies are flocking to TBEX in order to promote their destinations, products and services and many were on hand at the event. They gave out some good stuff to help us remember them by, most ambitiously the apparel company SCOTTEVEST who gave away one of their men’s or women’s travel vests to every attendee. These vests retail at $125 each, so this promotion could be valued at over $87,000. That is one testament to the value companies are placing on bloggers in the world of travel marketing.

For the way we travel, the most interesting things we got are as follows:

There were also various contests being held at events throughout the conference. Most notably and most comical, at the Expedia-sponsored Summer Shindig party on Saturday, Kevin was one of the finalists in the mechanical bull-riding competition—I’m not sure what the prize was, but it was fun nonetheless! Check out this video of his final, unsuccessful ride:

Also in another giveaway that night, Kevin actually won a three-night hotel stay at Wyndham Grand Resort in Orlando! We weren’t planning, or at first, very interested in going to Orlando, but as our above-mentioned Denver-ite friend Jeremiah is moving there in a few months, we’re considering a trip to visit him next winter.

Otherwise, Expedia was looking to kick off their new “Find Yours” advertising campaign that features travel bloggers talking about things they’ve found through travel, including this emotional story from Dave and Deb with The Planet D:

It’s a great campaign idea from a major player in the industry, acknowledging the tremendous value personal stories and blogs can play in connecting services to customers.

Have you ever been to TBEX? What did you think?