For our sometimes-series, Friend Friday, I wanted to feature some new friends that we had the opportunity to meet at the TBEX travel blogging conference a few weeks ago. (This is the final post in a three-part series on the event and some things I learned).

I met SO many wonderful people I couldn’t include everyone here, but I thought I’d choose a diverse group of bloggers that I discovered (or got to know better) at the event. So check them out. I think you’ll enjoy their photos and stories as much as I do! 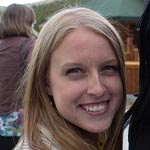 Ashley is an architect from Boulder who has recently re-focused her travel blog on travel through the eye of a designer. She had the coolest Moroccan-inspired business cards with the logo of her personal site. So before I even looked at her site, I knew she had a keen eye for design and I’m excited to read about her adventures going forward. 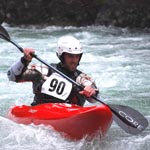 Bryon is an adventure sports enthusiast who only wound up coming to TBEX after he injured his wrist and couldn’t compete in a kayaking event that he had previously scheduled. So we lucked out and got to hang out with him! He’s currently road-tripping the US/later the world in an awesome, souped-up van with his gear strapped to the top, so keep an eye out for him! 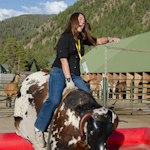 Deb from Traveling Well For Less

We were excited to meet Deb because like Kevin, she’s a travel reward points aficionado. Unlike Kevin (so far) her writing is almost entirely dedicated to points and reward programs offered by credit cards, airlines and hotel chains. We keep an eye on her site to find out about airline travel sales and loyalty program bonuses that can save you a lot of money in booking travel. 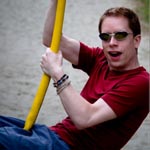 When I met Dustin, I recognized his distinctive blog brand and distinctive Twitter photo (as shown) but hadn’t yet checked out his site. He’s a mostly-nomadic engineer and business owner from Canada who works on the road. He’s had some pretty amazing adventures in his world travels (we liked hearing about his recent trip to Burma) and has excellent photography on his site. He also has a great new site, Too Many Adapters devoted to Travel Technology and gadget reviews. 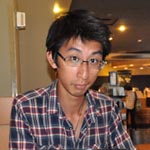 Who hitchhikes anymore? Dylan does. He’s a writer and journalist from the UK who has been hitchhiking his way through the places he visits. He is a funny guy and we had a great time hanging out with him. When I got home and actually read his blog, I found him to be a very articulate and thoughtful writer. I need to read more writers like that and recommend him to anyone else who wants to become a better storyteller.

Hilarye and Reid from Dotting the Map

Hilarye and Reid are a married couple from Utah. They write about their travels, mostly with their young children (sweetly pseudonymed, “BabyTravels” and “ToddlerTravels”—I’ve been meaning to ask what they’ll do in 6-12 months when BabyTravels outgrows her name?) They have pretty similar travel interests as us so we’re very excited to read their stories. 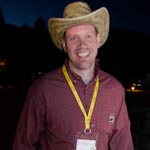 So Jeremy wasn’t totally new to me before the conference, I’d read his site a few times and had even talked to him on Twitter, mostly about his interest in traveling to see college football games (it was quite clear that Kevin and him would hit it off!) But I didn’t read enough of his work to realize he’s an incredibly thoughtful and heartfelt writer. I’m excited to see him at one or more Cal games this year! 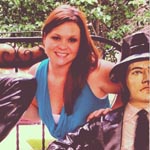 Jerri from Do It While You’re Young

This blog has got to have one of the coolest names for a travel blog dedicated to inspiring young women to travel (even though I’m no spring chicken and “doing it while I’m old!”) We met Jerri as she was in the process of announcing that she had sold DIWYY and concentrating on to other pursuits beyond travel including her work as an Army medic. But the site she created is awesome, so check it out. 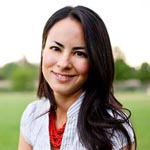 Kim’s a working photographer from Colorado who also writes and shares photos from her travels, most recently featuring some beautiful work from her trip to Japan. She validates my dislike of tripods and her travel stories are broken up by images of sweet looking dogs (bonus!). 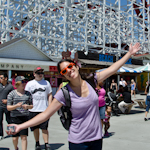 You may remember Kimi from my post on when we met up in Santa Cruz? She’s currently on the US West Coast in Seattle and is just beginning a 9 month trip around the world. She’ll be in Iceland in a few weeks, then Russia, Israel, Japan and more. So she has some exciting things in the works, so stay tuned! 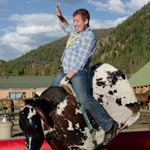 Nick is a great guy and he was our travel companion from Denver out to the conference. He’s got a flexible work arrangement and is arranging his life to take time off whenever possible. He focuses on budget travel and hostelling, so keep an eye on his tips in those areas. He also inspired me to jailbreak my iphone so that it now, FINALLY, works properly with Google Voice! 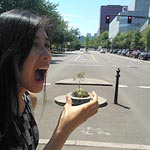 I’d read a post or two on Suki’s (it’s a pseudonym—am I supposed to say that? Well, I’m not releasing her real name!) site before the conference, but until we met her and her partner, Ryan, I didn’t realize how very cool they were. They live nearby, up in San Francisco, and have very similar interests to us in food, good beer, and local adventures so we look forward to meeting up with them soon.

Photo sources: All the ones with mechanical bulls, cowboy hats, or roller coasters are mine. The others were scavenged from the authors’ various sites and social media profiles. I hope they don’t mind.