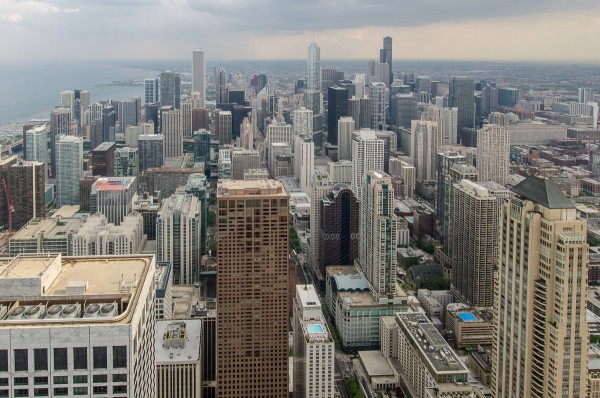 Earlier this week, I asked a friend if she was going anywhere on vacation this summer. She mentioned she was headed to Chicago for the first time to attend a conference.

Kevin and I went to Illinois last year for a family wedding. We spent the first two nights in the bride’s suburban hometown but tacked two extra nights onto the trip to stay right in the center of the city. It was his first trip to Chicago, and my second, if you count a 12-hour stop a friend and I made on a road trip back when I was in college. This was another quick trip and we only had time to do a fraction of the things we wanted to see and do. It was late spring, so the weather was hot, the city’s many parks and public spaces were in bloom, and I could even dip my toes in cold Lake Michigan.

My friend asked if I had any tips for her first visit to Chicago. She’s a photographer, so I instantly thought of the lovely city views. Chicago is a beautiful city. Much of the city’s architecture was built in the late 19th century, after the Great Fire of 1871 wiped out much of the historic trading center. This point in time was an innovative time in U.S. architecture, and Chicago embraced it like few others with momentous structures and ornate details. The city is even home to the nation’s very first skyscraper, built in 1884.

It’s these urban views that really stand out when I think of Chicago. I took this opportunity to finally dig into my photos and show her exactly what I mean.

Planning a trip to the Windy City? Here are seven of the best views in Chicago.

>> Find more things to do in this Chicago guidebook <<

1. Your Reflection on Cloud Gate

One of Chicago’s most recognizable landmarks is Cloud Gate (“The Bean”), a massive public sculpture made of highly polished stainless steel. Walk around the mirror-like sculpture and catch your image reflected from a variety of distorted perspectives.

2. One of the Most Beautiful Bathroom Window Views in the World

For more epic views of Chicago, board the elevator to the 96th floor of the John Hancock Center Building to visit the Signature Lounge Bar. The trip up to the top of the building is free, but you’ll want to order a drink and sit for a while to enjoy the panoramic city views. 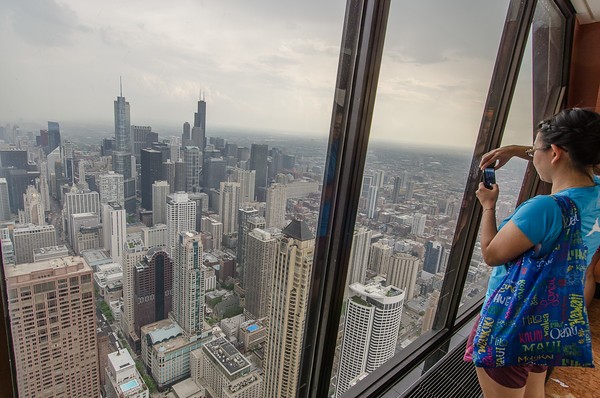 Ladies, be sure to check out the women’s bathroom for broad floor to ceiling views. Apparently, men aren’t so lucky. Kevin said the view from the men’s room isn’t quite as expansive.

Oddly enough, this is the not the first time I’ve written about awesome views from bathrooms…

Many of Chicago’s grand old buildings have equally impressive interiors to match. One to check out is the historic Palmer House Hotel, now called the Palmer House Hilton Hotel. Stop into the ornate 1925 Beaux-Arts lobby bar for a drink or dessert. Try something with a brownie, since the hotel claims to have invented the sweet treat.

4. The City From the Chicago River and its Canals

The river is very important part of Chicago’s history. It’s the reason the city grew up as an early trading center, and in recent years it’s been home to several human engineering and bridge-building marvels. It’s important to check Chicago’s many river views, and the best shots are from aboard one of the Chicago Architectural Foundation’s river cruises.

5. The City From the Beach

Normally, the last thing on my mind when I’m exploring a major city is a sandy beach. Chicago’s beaches caught me by surprise, in that they are immediately adjacent to the city’s business districts. I love this juxtaposition of sand and towers.

6. The Subway and Views From the Elevated (“L”) rail

The city’s subway and famous elevated train lines make for lots of interesting shots. I love this one showing a mirrored reflection on the front window.

This one may only make sense to crazy fans of the Chicago alt-rock band, Wilco. In 2002, Wilco released the band’s much-lauded album, Yankee Hotel Foxtrot. The album cover featured a view shot below the corncob-shaped Marina City residential towers. Here’s my recreation.

Pretty close, right? I love Wilco, so capturing this shot was the coolest souvenirs I could get. Even if you’re not a Wilco fan, these towers are distinctive and an iconic view of Chicago. We passed right under the towers on our Chicago Architectural Foundation’s river tour, noted above. I highly recommend you book this tour to learn about city history and enjoy some of the best views in Chicago.

Find out more things to do in this Chicago guidebook!

This post was shared as part of the Hipmunk City Guide Project, 2015.

« Summer Giveaway: Win a Coolibar Hip Zip Rash Guard
From Sacramento to The Bay: A Ride on Amtrak’s Capitol Corridor »