Craft brewers today are an innovative bunch. Some brewers are crafting beers with strange fruit, grain and herbal ingredients, beers aged for years rivaling distillers of whiskey or scotch, and using wild strains of yeast where the brewer has no idea up front which flavors she or he will get. But one of the craziest recent trends is the advent of “extreme beers”, or beers brewed to have unconventionally high level of alcohol.

We stumbled upon one of these extreme beers last year in London. After finishing a street art tour in the East London neighborhood of Shoreditch, our beer loving guide recommended we stop into the nearby pub owned by a Scottish brewer called BrewDog. As I scanned the tap list, one beer stood out — first for its goofy name (“Tactical Nuclear Penguin”) and second for the shocking number scrawled next to it: “32% ABV” (Alcohol by Volume). I was surprised, but I ordered a glass. 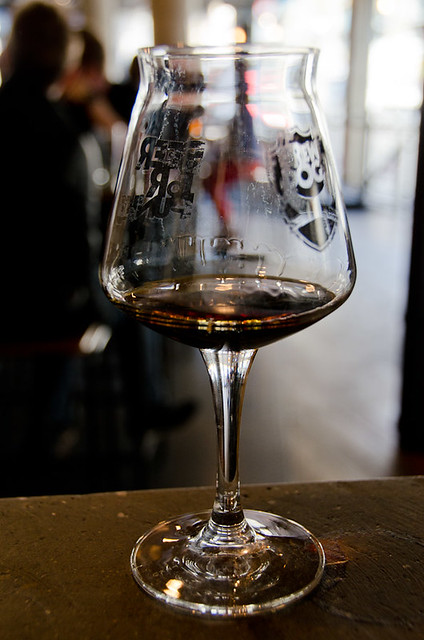 I’d never before seen a beer with that  high percentage of alcohol. For comparison purposes, Budweiser, Corona, and Heineken range from 4-5%. The highest you can typically find on a specialty beer market’s shelves are double and triple fermented ales and barleywines in the 14-16% range.

BrewDog prides themselves on pushing the boundaries of brewing, and they threw themselves into this unique challenge of making the strongest beer in the world.  With the help of the sub-zero industrial freezers at a local ice cream factory, they froze the beer and then removed the pure water ice to make a thick, concentrated liquid more akin to hard liqueur than a beer. Check out this crazy video about their production process.

When Tactical Nuclear Penguin was first released in 2010, it was the strongest beer ever made. Since that time, BrewDog has topped it three times more (at 35%, 42% then 55%) while a handful of other breweries jumped in to the competition. The current (January 2014) record holder for the strongest beer in the world is another Scottish brewer called Brewmeister who produced a whopping 67.5% ABV barleywine called “Snake Venom.”  (Side Note: To match the craziness of this competition, BrewDog bottled their strongest beer (“The End of History,” 55% ABV) inside of a taxidermied squirrel. They called the project “a conceptual marriage between art, taxidermy, and craft brewing.”) Here’s a photo from Brewdog’s website: 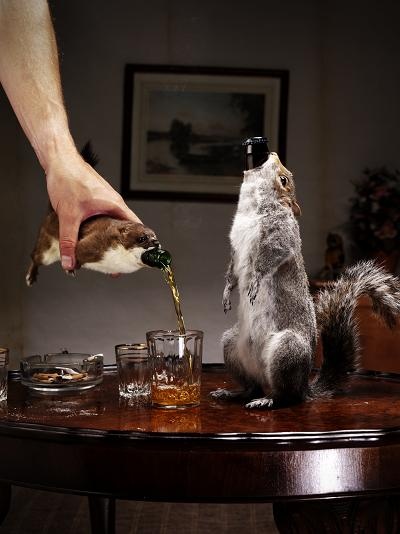 BrewDog only produced 11 squirrel-blanketed bottles of “The End of History” which are now sold out, so Tactical Nuclear Penguin is the strongest one BrewDog typically has in stock. Also, at a cost of 6 British Pounds for a tiny (25 mL/0.8 oz.) pour of TNP, we couldn’t afford anything stronger or more limited quantity!

With that said, how did it taste?

Tactical Nuclear Penguin was served in a snifter glass, just a small tasting-size pour meant to be savored like a fine whiskey or Scotch.

It was thick and viscous with no head and extremely heavy “legs.” See below… 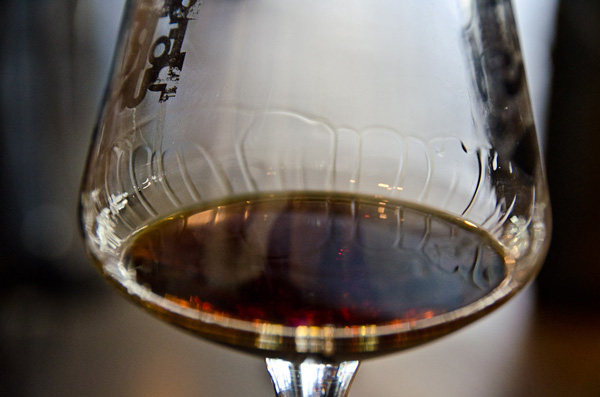 It was hard to taste or smell anything beyond the strong alcohol, though the syrupy texture and bitter sweetness reminded me of molasses.

While extreme beers are bit of a novelty and not really something I’d want to drink a lot of, I’m interested in seeing brewers do creative things and push the boundaries of how we define beer, wine, and spirits. I applaud BrewDog for that.

Update 8/2016: I was excited to learn that BrewDog is coming to U.S.! They are building a cooperative brewery in Columbus, Ohio which will increase supply of their fine beers across the pond. They are currently inviting U.S. beer lovers to invest in the project and become a member. Find out more about their Equity For Punks project here.

Have you ever tried an extreme beer?

« Views of Paris At Night
Paris Park With A View: Promenade Plantée »