Iso Rabins, the founder of San Francisco-based ForageSF has been called a “renegade” for holding “illicit” events all over the Bay Area.  His organization, ForageSF, seeks to bring city people closer to their food by designing unique food adventures like wild mushroom foraging food walks, an underground supper club, Wild Kitchen,  and a chance to try the next great street food at the now defunct Underground Markets.

In the early days, when these events were truly underground, the San Francisco Public Health Department was content to look the other way, but as word of mouth spread, these events became so popular (with nearly 3,000 people attending each one) that Rabins is no longer able to fly under the radar.  Of course, with the New York Times writing about him seemingly every other month, it’s not like he ever did.  But in San Francisco, where the culture celebrates rebels like Rabins, a little thing like a health permit isn’t going to stop his movement.  It can only delay it.

So it came as no surprise to me that the day before the “Wild Boar Ramen Movie Night” that I’d bought tickets for, I received an email stating, “We ran into a permitting issue, and in our seeming to never end cat and mouse game with the health department, we had to back down this time.” So we all had to wait two more weeks for everything to come together. No problem. To paraphrase the great George Contanza, I can do two weeks standing on my head!  But during those two weeks, I came to the realization that I had no clue what to expect from an event like this. Where exactly in San Francisco would this event be held, anyways? “Somewhere in the Mission (District),” was all we knew. That could mean a lot of things. Was Iso Rabins some kind of “food nazi”/Gordon Ramsay who would serve me my food and then yell at me for eating it wrong? 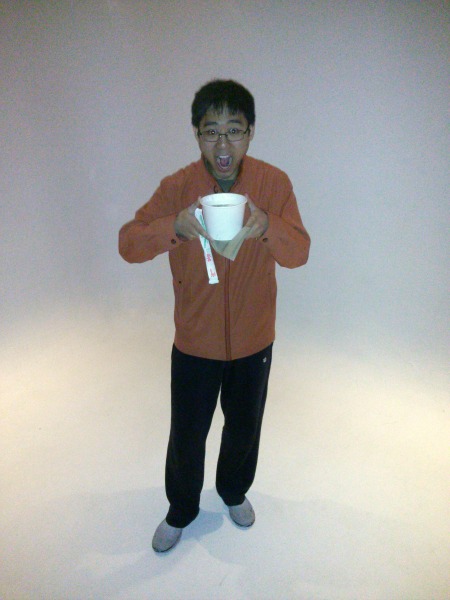 My friend Peter shows his excitement

I’d attended a number of Underground Markets before, but never an event like this one.  I went with a few of my co-workers, and we followed the GPS to a non-descript address, saw a hand-drawn sign and gave a woman at the door our names.  We walked in to find a small warehouse-style space with high ceilings.  The place likely doubles as a makeshift art gallery by day.  Oh, and there was a mystery van parked in the corner. (I would love to know the story of this van.)

Wild boar ramen movie night began with Rabins’ short introduction of the Japanese cult film, Tampopo.  Rabins described Tampopo as “possibly the best ‘food porn’ ever made.”   I had no idea what that meant.  The main arc of the story is about a truck driver, somehow a ramen expert, who helps a beautiful woman learn to make great ramen.  From the film, I learned about both making ramen and eating it.  For the chef, every detail is important, from how thick to slice the pork, how to make the noodles, and how to create the broth.  For the diner, it is considered a compliment to the quality of the chef’s ramen if you finish every drop in your bowl.

I was hoping to merely learn the name of the dish the man made for the child (omurice, a dish commonly made for children in Japan), but instead, I was lucky to find the scene itself.  Even though this one scene doesn’t match the tone or style of any other scene in the film, it somehow captures the film’s essence.  In the playful way the homeless man (played by the director himself) lays out the ingredients, to the way he flips the egg, carefully patting the pan handle with his other hand, you can see that food is to be loved and it is a way to show love.   Something about this scene really speaks to me… and makes me smile… and makes me hungry!

After watching so much delicious food created and consumed for what seemed like an eternity, the smells from the kitchen had filled the main room.  I must admit I was absolutely starving.  This was torture.  When they finally announced the food was ready, I expected the horde to descend upon the food table.  But this is San Francisco.  Everyone waited for their food as if they had all the time and not a care in the world.  I love my town.  I stood back to take pictures, but the battery on my phone was dead, so I borrowed Katy of ForageSF’s phone to take some pictures.   She was just happy that I was tall enough to see over the crowd.

And during this time, I showed Iso the pictures I’d taken, and I got the sense that he’s just the kind of guy you wish you were friends with, so you could stock your fridge with fresh groceries from any of San Francisco’s top markets, then hang out with him at a local bar, playing pool, throwing darts, and drinking brews for hours.  Then, all your buddies come over after closing, and he just whips up some kind of savory masterpiece that hits the spot like no pizza delivery or burrito ever could.  (Oh, and he liked the last photo with the ramen bowls lined up.) 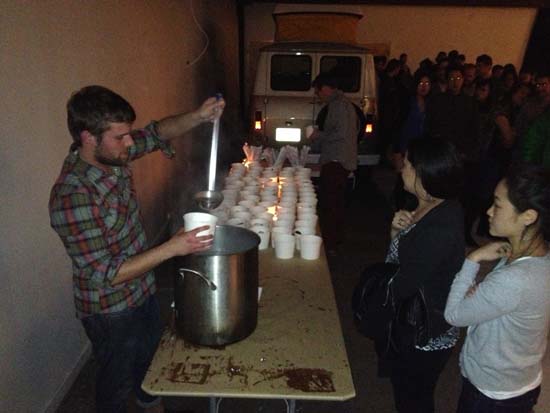 Sorry, got carried away there.  You’re probably wondering about the wild boar ramen itself.  The wild boar meat gave the bowl an earthy flavor unlike any I’d ever tasted eating the traditional pork slices.  The broth wasn’t too heavy, but was flavorful and delicious.  And of course, I finished every drop. 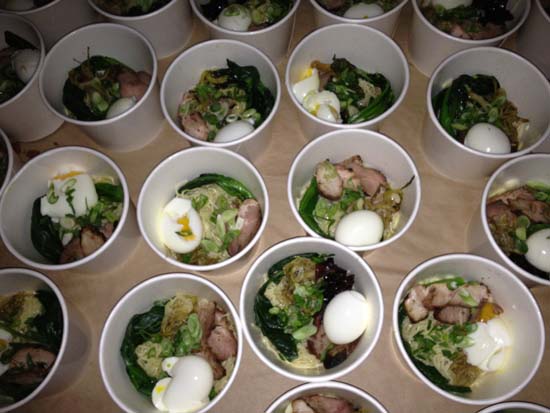 Ramen ingredients lined up and ready to go

« What Does Your Sweatshirt Say?
Photozini Review: Turn Your Photos Into A Magazine »