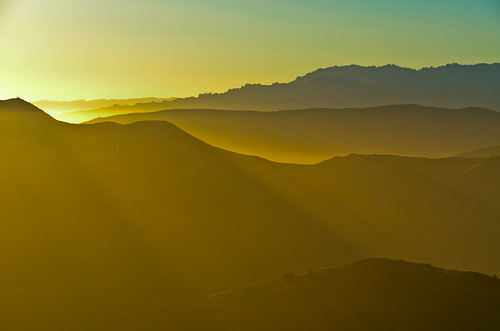 Last month, we celebrated the 1 year anniversary of this blog, Ever In Transit.  2012 was a great year for Cassie and I, as we traveled A LOT!  “You’re really living the dream!” my friend Willem said to me this past summer.  He was right, but alas, some big changes are in store for me this year.

A year after going to South America (twice), Alaska, New Mexico, Arizona, Colorado, Ohio, Pennsylvania, up and down the California coast, and in total, being on the road for over 100 days, I had to get a real job.  Yes, a job that’s going to require me to be in the office every day instead of working from home as I had been, where I’d implemented a rather casual dress code (i.e. sweatpants), and where I would usually break out of my concentration to find the cat sitting on my lap or sprawled across the keyboard!

I’ll have 17 days of vacation plus sick time and 11 paid holidays.  I am, again, a working stiff.  But I am very sure this is the right decision for me, and for us.  Cassie and I will have real health insurance (instead of a cheap, high-deductible plan that only pays out in case of emergency), and we’ll have a dependable, stable income.

And over the past two years, Cassie and I have learned a lot about ourselves.  First, we absolutely love to travel, and we’re amazed by nearly all things in all places.  Both of us are such curious creatures that I don’t think our sense of wonder will ever wane, and I’m confident that every place we visit in the future will be special and new to us.  Cassie, especially, has worked so hard to take pictures and write stories that really communicate the beauty and wonder we’ve been so lucky to witness, and I hope you guys, our readers, have enjoyed coming along for that ride.  We also hope we’ve inspired you to get out there and see some of the places you’ve always dreamed about.

Second, since we haven’t exactly been making loads of cash the last few years, we’ve learned to be happy with a rather spartan existence.  I remember being shocked (and somewhat appalled) after we visited Spain, which is not exactly a cheap country, and finding after we returned that my credit card bill was actually lower than normal.  The reason was because I wasn’t spending 12 hours a day on the computer buying all kinds of crap I didn’t need.  Instead, we were out seeing the world.

Last, while I really admire the “digital nomads” out there who have unshackled themselves from all the B.S. of our society and are out seeing the world on their own terms, I learned that I’m really a homebody.  I love my home in the San Francisco Bay Area, and my friends and family there.  I love my neighborhood.  And when we’re away for too long, I really miss the dog!

As some of you may know, Cassie and I had planned a pretty incredible six week trip to South Korea, Burma, and Thailand early this year.  (Never mind how were going to do all this with no money, I’ll save that for another post).  Because of the aforementioned J-O-B, we had to cancel it.  Can you imagine starting a new job and immediately requesting six weeks off?  Me neither!  Additionally, even though Cassie and I had long dreamed about this trip, both of us finally realized that we’re simply not people who can handle six-week trips.

The problem with our travels is that we want to see and do EVERYTHING.  We want to eat and drink EVERYTHING.  If there’s a mountain, I want to hike to the top of it, if there’s a bridge, we want to cross it, if there’s a bus, train, or trolley, Cassie wants to ride on it (and I’ll go along if there’s food at the end of the line).  I would love to get one of those pedometers that track how far we walk in any given day when we visit a city.  I already pretty much know the answer:  far!  And that’s because I get so exhausted at the end of each day we’re traveling.  And what I learned is that I can’t handle more than about two weeks of this constant motion.

Perhaps with unlimited time, and an unlimited budget, we could learn to slow down.  But that’s probably never going to happen, so this is how we travel.  We need vacations from our vacations.  And what do I call those “vacations from my vacations?”  Work!  If I’m going to be home, I might as well have a real job.  I sit at a computer all day writing code, so it’s not like I’m killing myself from physical exertion.

Travel is still a major priority for us.  We’ve got tons of trips already planned for this coming year.  We still have our Southwest Companion Pass through December 2013, so we’re going to do a lot of weekend and shorter-term travel in the United States.  Seattle, Portland, coastal New Jersey, and Niagara Falls and Toronto (for TBEX 2013) are already booked, and there are a ton of other spots we’ve been talking about, too.  Additionally, my new company has an office in Paris.  And they’ll let me work out of that office in Paris.

So while I definitely won’t be on the road for over 100 days this year, I’m still very excited about the adventures we have in store.  We just have to be a lot smarter about how we plan our trips to maximize our limited time off.

The dream is dead.  But maybe it wasn’t really my dream after all.