Today is the first Father’s Day I can’t spend with my dad, and it’s been tougher than I imagined it would be.  I say that only because I thought I was prepared for this.

About five years ago, my dad was diagnosed with a malignant melanoma. It was quite advanced, so I got used to getting bad news, then looking over my shoulder for the next set of bad news — which was always worse. But somehow, Dad was lucky. He beat the odds, and had been cancer-free for three years before we lost him to a heart attack last month.

Whenever I think about him now and start to lose it, the one thing that helps is thinking back to happy memories. In our case, our happy times almost always involved our cameras.

Dad was an exceptional photographer. He was also the type of person who didn’t seem to think much about the past — he preferred to focus on what he was doing in that moment, or maybe something in the future.  He definitely passed that focus onto me, but I can still look back on the photos we took together and be transported right back to that time and place.

Here are some memories, as seen through the lenses of our cameras.

A Window to an Arch in Utah

This trip to Utah was a few years before Dad’s diagnosis, so when I think back to that week, I remember things being so carefree. It was as if we had all the time in the world to take pictures together. We would wake up early in the morning to shoot in the warm morning sun, go back into town during the middle of the day (when the light is crappy) to drink a few beers, then go back out at dusk when the light got good again. There were certain landmarks that had good light in the morning, and others were better at sunset. We had it all planned out.

The way Dad told the story of this photo, I volunteered to take the camera, hike around a steep cliff, and generally risk death to get this shot (but I have a pretty strong fear of heights so I remember it a bit differently). Still, it’s possible that I was so focused on my end goal that I didn’t even think about all the things that should have frightened me. Nothing was going to stop me.  I wanted this shot so we could share it together.

A Coyote in Yellowstone

We visited the park in early October, just as the tourist season was ending, and the first snow was beginning to fall.  It was magical, seeing the steam rise up from the hot springs and geysers, or when it burst out of the noses of the elk and bison males as they battled each other for dominance in the herd.  As photographers, we dreamed about these experiences.

On one morning, we were driving along the road and came across a coyote wandering along the shoulder.  We slowed the car to match his pace as I quickly readied the camera for a closeup shot.  We followed along for a few minutes as the coyote pretty much ignored us.  “Slow down…”, then, “Speed up!” I barked at Dad, who was driving.

All of a sudden, the coyote turned around to face us, his winter coat lit up by the morning light shining behind him. “Taaaaaaaakkkkeeee thhhheeeee shhhhhotttttttttttt,” Dad’s voice rumbled as time seemed to slow down in that perfect moment. Dad and I both remembered it the same way, and this is one of my favorite photos I’ve ever taken.  It was a true team effort.

We traveled up to Oregon when Dad was undergoing chemotherapy and was on a bit of a “bucket list” kick. We started the trip photographing bald eagles near Klamath Falls, and we took a road trip up the coast from there.

Just as we arrived at the vista overlooking Cannon Beach, a storm was rolling in.  It began to rain harder and harder, but in Dad’s mind, those willing to be brave get the biggest rewards.  And on this day while the rain drenched us, we were able to capture the sun peering through the clouds, giving the mountains off in the distance an eerie glow. As he said, the most worthwhile things in life often require harder work and more sacrifice, and I didn’t always see the benefits right away, especially when I’m cold and wet.

But I see the benefit now.

Sandhill Cranes Come In For Landing

Bosque del Apache Natural Wildlife Refuge is famous amongst birders, and dad traveled there many times over the years. I finally got to go along in 2012, as Dad was starting to feel better.

During the winter, tens of thousands of sandhill cranes, snow geese, and other migratory birds make their home in the ponds and fields of New Mexico. Especially when it came to photography, it’s an understatement to say that dad was a perfectionist. Unless he had the perfect light, the perfect focus, the perfect composition and exposure, he was never satisfied.  He taught me always to aim higher with anything I did.  (Well, not with the camera — he taught me to aim that at my subject, but you know what I mean!)

The only trouble is perfection at Bosque requires getting up at ungodly early hours in the biting cold.  And then you stand there not being able to feel your face, just hoping the birds do something interesting. But one evening, as the sun set over the mountains, we watched as the sandhill cranes came home for the night. Wave after wave, in perfect formation, they circled above for a few moments, then together they spread their wings and floated back to Earth. We snapped this shot just as they “put down the landing gear,” as dad liked to say, their bodies silhouetted against the orange winter sky.

Did we achieve perfection that day? When I look back on it, I think maybe we did.

The Only Galapagos Marine Iguana We Might Ever See Is Right Here, Right Now 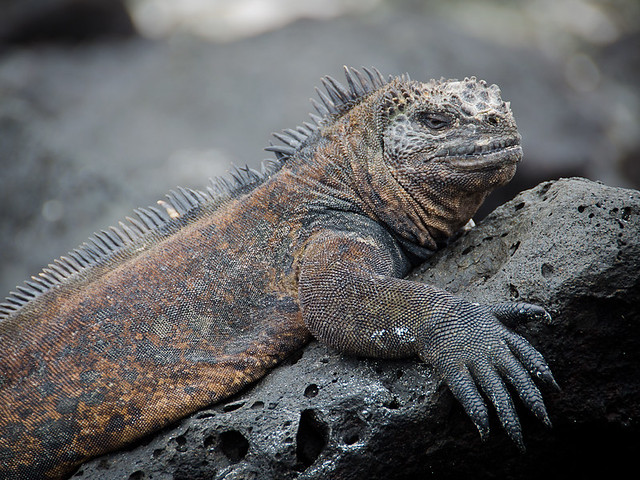 For about six months back in 2012, I secretly hoped that Dad could join me and Cassie on our trip to South America.  This was a lot to ask of Cassie, that she spend 19 days together with him on what was supposed to be our trip. She’s pretty particular about how she travels (I bet you didn’t know THAT!) But for those six months, the biggest question was whether he was healthy enough to travel.  His cancer was in remission, but his immune system was weakened by the chemotherapy. He had to wait for a doctor’s approval before he could come.

So when we finally got to the Galapagos, and came face to face with our first marine iguana, we were a little too excited. We took pictures of this one iguana sitting on this one rock for about an hour.  (On the plus side, we also saw this octopus.) And then we finally bothered to look slightly further down the beach only to see hundreds more just like him. We were finding out that Galapagos marine iguanas are like cockroaches — they are everywhere!

We made this mistake constantly, because as photographers, we’re trained to treat everything we see like it’s the only time in your life that you’re ever going to see it. You don’t want to look back on that shot you missed because you took it for granted. You don’t want to have regrets.

As I look back on everything, I almost believe that Dad’s cancer was a blessing in disguise. I’m not saying it wasn’t completely awful, but during that period, I never took a single second I had with him for granted. I appreciated him. I knew there was so much more I could lose.  Of course, the perfectionist in me is frustrated that I still can’t seem to write exactly what I feel inside.

Because of the cancer, I don’t look back and wish I’d made just one more phone call, or played that last game of catch in the backyard. I believe we did every reasonable thing a father and son could do together. He got to spend a lot of time with Cassie, the love of my life, and we got to share many amazing moments together. So I don’t have to look back with regret.

The hardest part right now is facing the fact that we won’t be able to do anymore amazing things together. In the end, though, he was happy, and we had a good run.