Anyone who talks to me for more than ten minutes knows I am a huge fan of the Public Radio International show, This American Life. On Thursday night, we went to see the TAL Live Show, streamed to a local movie theater. As always, the show was funny, touching, and a little weird, sharing the most unbelievable stories from everyday life that Ira Glass and his crew can find. 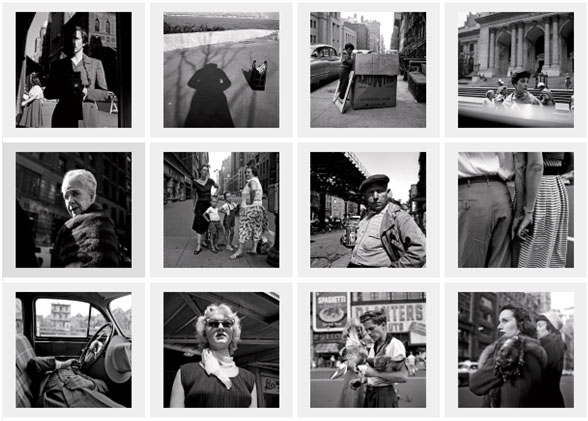 One of the most fascinating stories that they featured was of the life and collection of Vivian Maier. In 2007, a storage locker in Chicago was auctioned off after the payment went delinquent. Amidst decades worth of rotting newspaper and rubbish, the buyer found over 100,000 negatives, thousands of prints, and countless undeveloped rolls of film. The photos turned out to belong to Vivian Maier who was not trained as an artist but worked as a nanny for almost 40 years and documented her everyday life through photography. She loved to travel, and spent six months exploring Africa, Asia and South America, something that was unthinkable for a single woman in 1959! Even when she was not traveling, she was adventurous and would explore her city looking for beauty in the otherwise mundane. She was an extremely private person, but meticulously documented her life in photos, all of which she hid from the world for decades until the day that storage shed was auctioned off.

I’ve been tremendously inspired by her work! She seemed to have a fearless ability to take close-ups of strangers she met in the street. Her images also captured really interesting scenes of everyday life that other people were certain to overlook.

Here are a few lessons for photography (and life) that I imagine she might have shared:

You can see more of Vivian Maier’s photos here or by watching the following video:

And will someone please buy me this newly-released book of her photos for my upcoming birthday (hint…hint).

What are some tips you have for capturing street photography?