At the top of the list of French foods that I wanted to explore on our recent trip to Paris was the macaron, the most alluring of French pastries and certainly the most photogenic. These colorful little creations are made of a sweet or tart filling (buttercream, jam, ganache) sandwiched between two meringue and almond flour-based cookies. Most of the big pastry shops that specialize in this confection make more than a dozen flavors, many of which are colored extravagantly with sheer and sometimes shimmery food colorings.

In my opinion, the cookies should have a smooth, firm exterior that melts quickly in your mouth leaving a thick layer of cream fillings to linger. I tried a handful of the most popular macaron shops in Paris when we were there, in each place buying a box of five to eight so that I could sample different flavors and decide which shop I thought offered the best macarons in Paris. 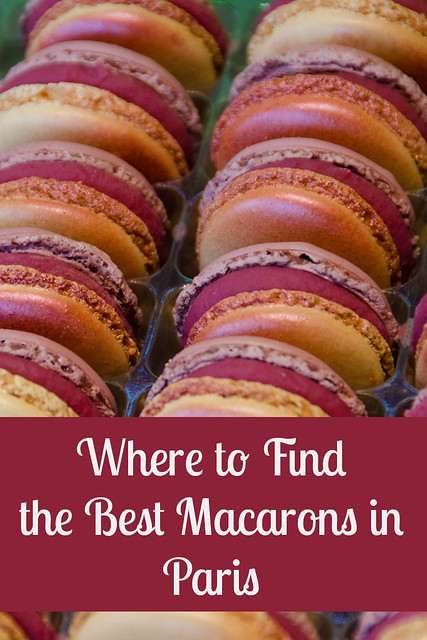 Here are some of the macaron shops I tried, ordered from worst to best (plus a surprising honorable mention): 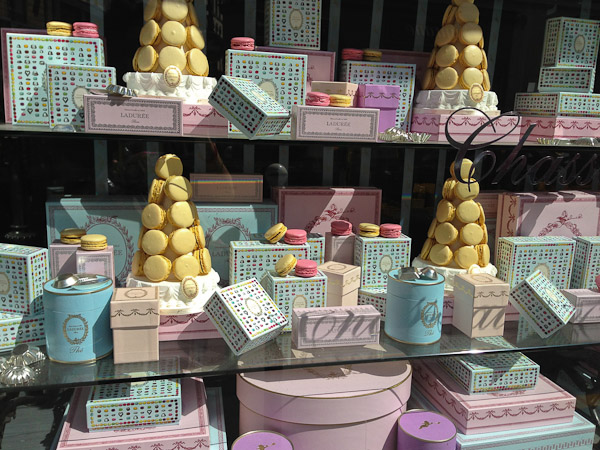 Ladurée was the first shop I visited. My friend, Pierre, spotted it and said he had always wanted to try their macarons. Later on, I learned that they are the granddaddy of French macarons and one of the most popular shops, and many people rate it the best macaron shop in the city. Nearly every passenger on our flight back to San Francisco was toting on of their signature pastel-turquoise bags filled with goodies to bring home.

Their shop was incredibly fancy, evoking a Paris of a century past. And the macarons were colorful, smooth, and perfect looking. We ordered  a box of 8 of them. So it surprised me when I tasted the first one and found the texture really unpleasant. The filling was incredibly chewy, almost like taffy. And the cookie didn’t melt in my mouth, it was very chewy and actually stuck in my teeth. It tasted stale.  The flavor was nice, but the texture was quite unpleasant. At first I thought this was just the one flavor that I tried, so I tried another. And then another.  But they were all the same.

Because it was my first French macaron, I thought perhaps that my perspective was skewed, but when I later visited several other patisseries with softer, more delicate macarons, I became convinced that Ladurée is just really over-rated.

I read that this place won a “Best of Paris” macaron competition, beating out the more popular Pierre Hermes in a few flavor categories.

Carette is a full Parisian cafe, not just a pastry shop. It was packed with people dining in for desserts and coffee, so we had to push our way inside to get to the counter where we could buy our macarons to go. It’s located right above Metro: Trocadero, which is the stop you get off to visit the Eiffel Tower. We picked up a selection to take with us, and wound up sampling them as we waited in line to go up the tower elevator. It was the perfect thing to do to make the time go faster. 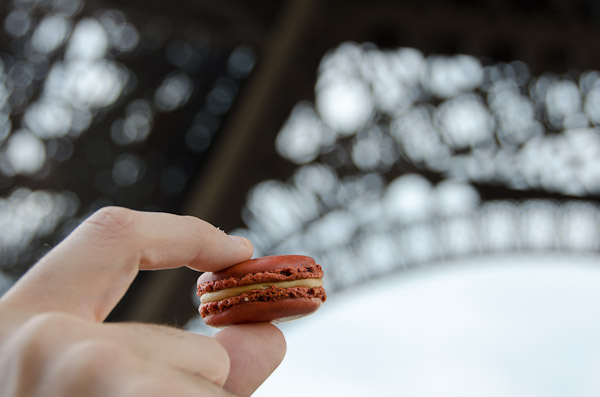 Carette’s salted caramel macaron, in line for the Eiffel Tower.

Carette had fewer flavors than the other shops I visited. We ordered a handful of flavors including the salted butter caramel, dark chocolate, and a few fruity flavors. The salted caramel and chocolate  flavors were both perfectly textured cookies with one of the thickest layers of cream of any of the macarons we tried. 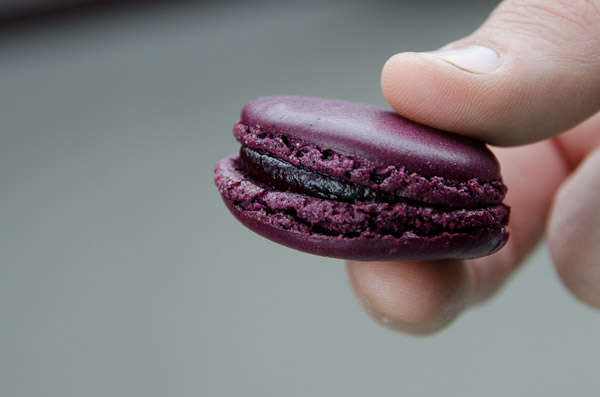 The fruit flavors also had a very thick layer of jammy filling, which was a bit too tart and too intense for me.  But otherwise, it was a great place and worth stopping by on the way to the Eiffel Tower. 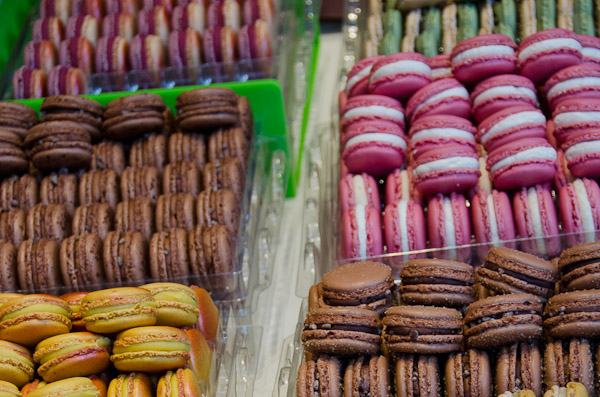 I was drawn to this shop because I read that they offer a variety of creative flavors, including a matcha green tea/sesame seed and a vanilla/olive oil pairings — both of which I loved, so they get points for creativity.

But what I most loved about their macarons was the perfect texture and delicate, balanced (not too sweet, not too tart) flavors. The cookie’s exterior has a nice crisp coating that melts away as soon as you hold it in your mouth. The flavors were uniform in having this perfect texture and perfect balance of cookie and cream.

The shop had a sleek, modern look and the macarons were not overly colored, though they brushed some flavors with a shimmery, silver food gloss, which added a stylish touch. 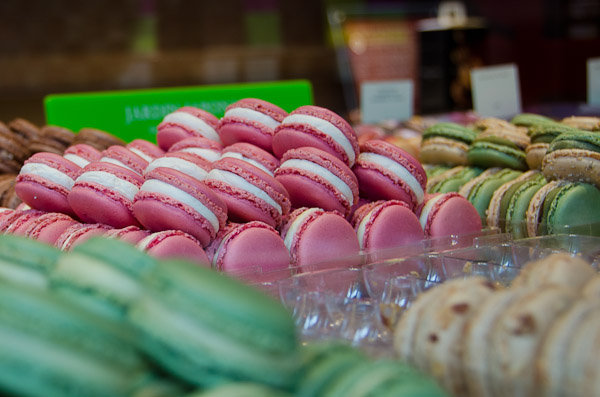 They were really the perfect combination of mouthwatering texture and flavor and I can definitely understand why it is considered one of the more popular macaron places in Paris.

McDonald’s (Locations that have a “McCafé”) 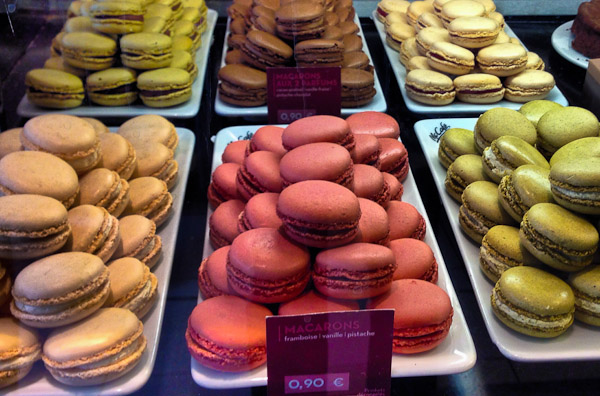 Did you know that McDonalds sells macarons in Paris? I didn’t until I walked past the storefront of one of their McCafe’s near the Hotel de Ville. I’m not sure  I’m ballsy enough to exclaim that the macarons at McDonald’s were better than the century old Ladurée pastry-making tradition, but they were surprisingly decent. I’m holding McDonalds to a different standard because they are not making any claims to sell the best macaron in the city.

McDonalds’ macarons were served cold from the refrigerated cooler and were a bit firm because of that. The cookie texture was much more like a cakey brownie than a macaron, but the flavors were good and the filling was thick and soft.

It’s worth sampling McDonalds’ macarons for the experience, but please don’t just stop there!

« A Cheery and Convenient Place to Stay in London
A Foodie Day Trip From San Francisco: Marin & Sonoma County »