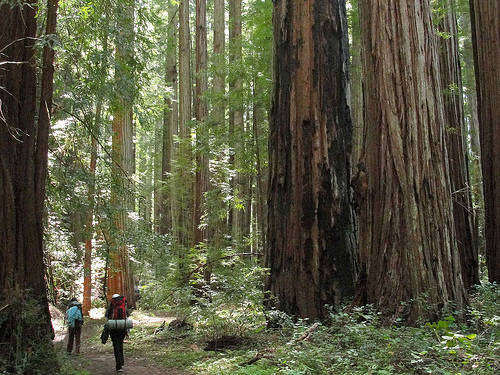 I spent some time this morning planning for a camping trip we’re taking at the end of this month. We are heading up to far-northern California to spend a few days in the Humboldt Redwoods State Park. This park is home to the largest remaining old growth redwood forest in the world, and the “Avenue of the Giants”, a 31-mile drive that goes past (and through!) some of the tallest trees in the world.  I’m excited to see these places, camp in the woods, and spend time with good friends.

While I’m happy to visit this spectacular place, I feel especially lucky to have the opportunity to visit the park at all!  In May of 2011, the California Department of Parks and Recreation announced plans to close 70 state parks–nearly one quarter of the entire system–due to insufficient funding allotted by the governor and the legislature. Since that time, the state has allocated temporary funding (some for as little as a few weeks!) or worked out alternate funding arrangements at all but one of those state parks.  I’ve been hearing about this in the news a lot recently, because the effective date of these closures was today–July 1, 2012.

In addition to these challenges to the state park system, our local and regional parks have been hit even harder in the past few years as state funding has dried up and small public agencies have been unwilling or unable to allocate the funds they need. Programs and important services have been cut like park maintenance, access to public pools, and summer camps for low-income children.

I’m a thief… and a hypocrite!

I love parks, though I admit I haven’t always been as good about getting out and exploring our local parks as I should be. Of the 3 state parks on the “list of 70” threatened that are located in my home county, I’ve only been to one of them—and even that one I visited just once! Also, I sheepishly admit, that because our county parks charge a $6 day-use parking fee, I usually park my car in a nearby neighborhood and walk in to access the hiking trails, dog park, or bathroom.

I always a fan of saving money on things when I can, but in cases like this, I want to be better about paying money to support services I care about. Public parks often rely on user fees to help maintain and ensure public safety. Obviously, $6 I skipped out on isn’t going to fix the problems our state and local agencies face right now, but it adds up when hundreds (or thousands!) of residents cheap-out and do the same thing. Also, when a public agency is looking to decide which parks to close, parks with relatively low revenue are the first on the chopping block. Every time you pay a user fee, you’re voting to protect that park or public service!

Some tips for supporting public parks:

Admit it — have you ever avoided paying for something you should have? And who’s going to join me in exploring a new park this summer?